On Thursday, President Joe Biden will be in the Portland area to tout his $1.2 trillion federal infrastructure package and its contribution to local transportation projects. The president signed the largest infrastructure spending package in history in November. The Infrastructure Investment and Jobs Act (IIJA) will provide unprecedented funding to repair highways and bridges.

Washington and Oregon were expecting at least $14 billion in federal funds last fall, when the legislation became law. It was noted that there were several special buckets of money for major projects like the Interstate Bridge Replacement (IBR). While there is no specific project yet, the Washington legislature has allocated $1.1 billion towards the IBR as part of its $17 billion transportation package enacted in March.

In talking about the IIJA, President Biden spoke about $53 billion to modernize highways. “So, you have to leave 30 minutes earlier to get to work just because of a traffic jam?  That’s going to be fixed,” he said in January.

“My infrastructure law includes a total of $40 billion in funding for bridge improvements.  $12.5 billion of that is going to replace most — the most economically significant bridges in the country.

The White House website lists the following as another part of the IIJA.

The U.S. Department of Transportation (USDOT) and Federal Highway Administration (FHWA) announced $27 billion in funding to replace, repair, and rehabilitate bridges across the country to all 50 states, D.C., Puerto Rico, and Tribal governments over the next five years.

FHWA at USDOT announced $52.5 billion in Federal Highway Apportionment for fiscal year 2022 the largest in decades for all 50 states and DC.

Governors Jay Inslee and Kate Brown restarted discussions about replacing the Interstate Bridge in November 2019 signing a Memorandum of Intent. The governors promised to be data driven.

“We intend this process to be a data-driven, transparent process,” Inslee said. “We want to look at the data on how to design a bridge that actually will do the best job possible based on data rather than ideology.”

“I think what else is key is that we’re going to be doing a traffic analysis ahead of time,” noted Brown, “to help us determine what’s the best solution for the I-5 Bridge Replacement Project.”

Many citizens have lamented the fact that IBR Administrator Greg Johnson and his team have not delivered on those promises. “The IBR has yet to release new traffic projections – the latest are from the CRC, based on 2005 data,” said economist Joe Cortright.

Inslee addressed funding and tolling at the joint press conference. “Although the memorandum of intent makes reference to not eliminating the possibility of tolling, I think anyone who understands the financial necessities here knows the uncertainty regarding federal funding,” he said.  Inslee mentioned there was federal funding for the original project ($850 million for light rail).

“Everyone’s going to be listened to and all options, including getting 100 precent federal funding, we’d love to see,” he concluded.

Governors Jay Inslee and Kate Brown sign a Memorandum of Intention and brief the press about the resumption of a project for replacing the Interstate Bridge. File video.

In November 2020, the IBR team shared that “if” the previous Columbia River Crossing (CRC) were built, the cost would run from $3.2 billion to $4.8 billion. Both state’s legislators were told they would have to come up with at least $1 billion, and the project would need tolling. That of course was before the IIJA was passed, raining unexpect amounts of federal dollars on both states.

Last week, Sen. Maria Cantwell visited Vancouver and toured the Interstate Bridge. “We wrote this language for mega projects with the I-5 bridge in mind,” she said. “The I-5 bridge also can be claimed as one of the worst bottlenecks, causing between seven and 10 hours of congestion during peak hours.”

“We thought there were projects that were so costly but had regional significance to the nation, that they deserved a category of funding all their own,” she said. “So the race is on now, to meet that criteria.”

The senator mentioned two federal programs; one for $5 billion and another for $12.5 billion which the IBR can compete to receive.

Senator Cantwell is clearly not aware of the numerous bridges that have been built this century for less than $1 billion, nor the fact that in the failed CRC, the cost of the bridge itself was only $792 million.

During her visit, Rep. Paul Harris (Republican, 17th District) indicated that with the huge amount of federal funds, there might not be a need for tolling. “I think there’s a possibility we might not have tolls; a possibility,” he said. “I think if we do have tolls, that they’d be very reasonable.”

Senator Cantwell mentioned that rules for a separate bucket of federal dollars will be released in May, and that the two states should settle their differences and fight for the “once in a lifetime dollars from the federal government.”

Thursday is the day where major details related to the IBR are expected to be released. Residents on both sides of the river are eager to learn how many total lanes will be on the bridge, what the Hayden Island interchanges will look like, and what form of transit will be proposed by the IBR team. The IBR team has already decided there will only be three through lanes for traffic; it is the number of “auxiliary lanes” that remain to be revealed.

There is a Thursday meeting of the Executive Steering Group from 10 a.m. to noon, and then a meeting of the Bi-state Bridge Committee of legislators from 2 p.m. to 5 p.m.

The IBR team has already narrowed down the options for Hayden Island interchanges to just two. One will be partial interchanges, serving Clark County residents with an off ramp for southbound traffic, and then a northbound onramp for the return. The rest of traffic would be handled from Marine Drive interchanges. The second option is a full set of exit and entrance interchanges.

The Columbia River marine traffic will be eager to learn more details regarding the clearance for river boat traffic. Earlier this month, it was revealed the IBR had asked the US Coast Guard for permission to build a bridge with 116 feet of clearance. In the failed CRC, three up river firms were awarded over $86 million in compensation because the bridge was too low.

Citizens are highly sensitive to the issue of tolling. Oregon is already moving forward with plans to impose tolls on all Portland metro area freeways, beginning “at the border” with Washington. If the IBR team demands a toll, that would be on top of what Oregon is already planning to charge. This caused Vancouver City Council Member Bart Hansen to lament that we would be building “roads for the rich.”

One of the projects competing with the IBR is the new Brent Spence Bridge over the Ohio River in Cincinnati. The governors of Ohio and Kentucky recently announced that this new I-71/I-75 bridge will have no tolls, and they expect federal funding will cover up to 80 percent of the bridge cost.

Citizens can expect there will be many local politicians lining up for the photo op to be pictured with the president Thursday. Will any of them tell him the people want a bridge that will reduce traffic congestion and save travel time? Will they share with him that they don’t want tolls and the federal funds should eliminate the need to raise money via tolling? They could point out the Brent Spence Bridge and the federal government is expected to pick up 80 percent of the tab. 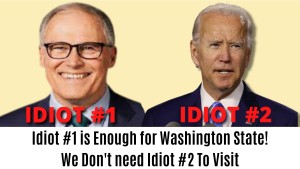 Thank you John Ley. The real solution is to also add a 3rd Bridge connecting 192nd Ave with Fairview. This would cover potential traffic issues and offer a real long term solution.

Dave – you are so right.

Our Regional Transportation Council (RTC) identified the need for TWO new bridges and transportation corridors, one west of I-5 and the other east of I-205. They provided two “options” for each new bridge.

It’s been 40 years since a new transportation corridor and bridge were built. Regional population has doubled, as has the number of vehicles on the road.

Why waste $5 billion scarce transportation dollars on a project that will save people zero time in their travel?

Important to make the new bridges Earthquake proof considering the Cascadian Quake that happens on average every 300-400 yrs is now due and increases in probability with every approaching year.

“In November 2020, the IBR team shared that “if” the previous Columbia River Crossing (CRC) were built, the cost would run from $3.2 billion to $4.8 billion.”

Is that the 2011 CRC cost estimates? What does it include?

” in the failed CRC, the cost of the bridge itself was only $792 million.”

What are the 2022 IBR estimates of costs?

What is the 2022 IBR estimated cost of light rail?

What is the 2022 IBR estimated cost of buses?

There is very little public information about the costs of this project, and a breakdown by component. All for an I-5 replacement bridge with the the same number of thru lanes as today, 3 lanes in each direction.

To relieve congestion, and facilitate freight transport, a third or fourth bridge is a higher priority.
﻿

Build a third bridge… and do it before engineering goes woke and math is outlawed as racist! 😉

*See: Opinion: Is it time for a new game plan?