BATTLE GROUND — He got back to the field sooner than expected, sooner, perhaps than his doctor would have preferred. 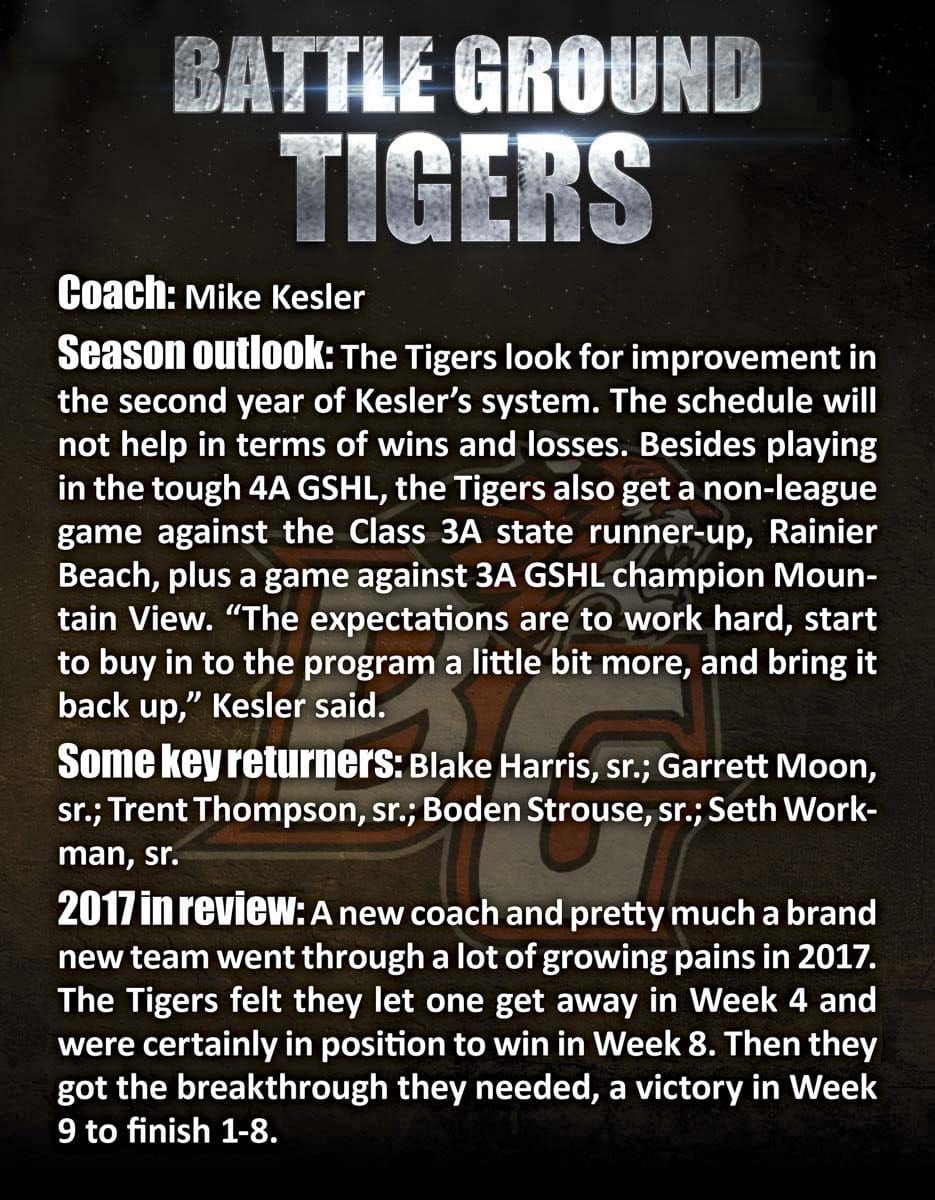 There are only so many games in a high school football season. Missing one or two games, much less eight, can be unbearable.

So Boden Strouse did all he could to return to action before the end of the 2017 season with the Battle Ground Tigers.

Even before he could play again, he remained involved, engaged with the team, trying to absorb every bit of knowledge to improve.

The injury he sustained last August ruined most of his junior season. But he was not done as a football player.

Now, as he prepares for his senior year, he has a new point of view.

“Every play on the field is a gift,” he said. “You can’t take that for granted. That’s what I learned from my collarbone experience.”

Strouse, a 6-foot, 2-inch wide receiver and safety, soared high into the air in an attempt to get the ball in the final scrimmage of August practice last summer. He would secure the interception, but he also came down hard on his right side.

At that moment, he was not sure of the severity of the injury. A little while later, though, while he was being driven to an emergency room, he figured it out on his own.

“I felt the bone sticking out of my skin,” Strouse said. “That’s when I realized I wasn’t going to be able to play. That was very hard to comprehend.”

He was about to miss all, or most, of a transitional year for the Tigers. Battle Ground had a new head coach, Mike Kesler, and a new system. Plus, after graduating a ton of talent from the 2016 squad, it was going to be a chance for the next wave of athletes to showcase their skills.

Strouse never really got that chance.

He did, however, get to show off his character.

“He’s one of those kids who is not necessarily vocal. He shows by example. He sets the tone,” Kesler said.

Strouse had surgery to repair his collarbone on the first day of school. He was told it would take three months to recover. He was told he would not play that season.

It turned out, Strouse was on the field for Battle Ground’s Week 9 victory.

“That was his mindset from day one after the surgery,” Kesler said. “It showed me the character of the kid.”

It is with that kind of leadership, the coach said, that will bring the program “back to where it was.”

The Tigers went a combined 15-5 in 2015 and 2016. The rebuilding project started last season and it took a while to see success on the scoreboard. But there were the Tigers, with Strouse on the field in Week 9.

“I remember everything,” Strouse said of that game. “From running through the tunnel, the crowd cheering, the big plays, the first whistle. I wouldn’t trade that moment for anything.”

Statistically, Battle Ground outplayed Prairie in Week 4, but the in-district rival beat the Tigers by one. In Week 8, Battle Ground lost by a touchdown.

The Tigers were down to their last chance at victory, Week 9 vs. A.C. Davis. Strouse and the Tigers walked off the field with a 28-20 win.

“To get that win with my team, to be part of it with them, it was amazing,” Strouse said.

That victory allows them to walk into the 2018 season with a good feeling, too. 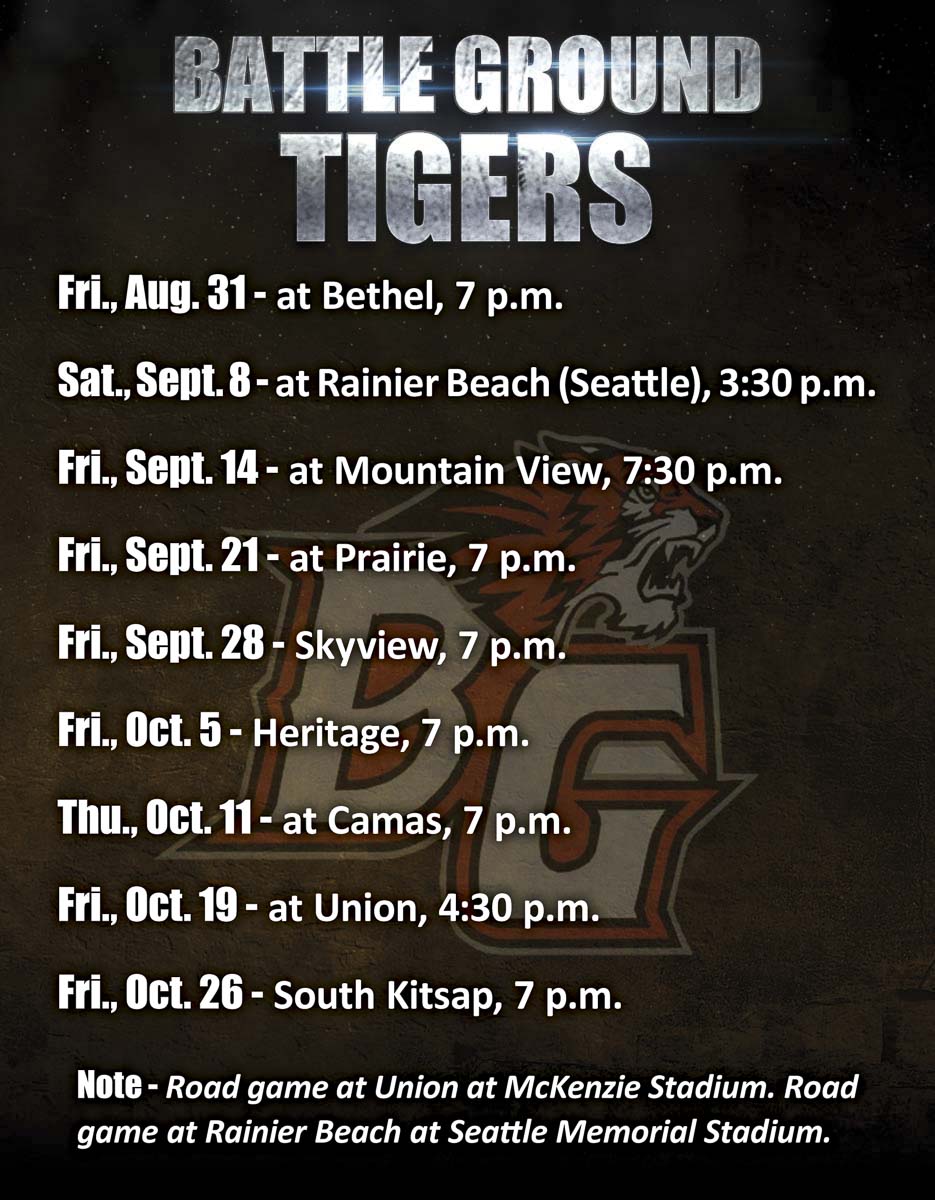 “We learned a lot and we created a lot of unity,” Strouse said of enduring that season. “I think we’re going to surprise a lot of people this year.”

On offense or on defense, Strouse’s individual goal is simply to be the best player he can be, every play.

It is a similar philosophy he has for the team’s goal this season.

“Our goal is to play our heart out every single play we run,” he said. “If we can do that every single game, we’ll be successful.”

It was that heart that got Strouse back on the field last season. He did not rush to come back to join a team going on a playoff run. He rushed to come back just to be with his teammates.

He plans on enjoying a full season with the Tigers in 2018.