Costs are escalating rapidly for more recent and larger projects, including the I-5 Bridge replacement project, indicating this problem is getting worse

The Oregon Department of Transportation is proposing to move forward with a multi-billion dollar series of highway expansion projects in the Portland metropolitan area, including the $5 billion Interstate Bridge Replacement project, the $1.45 billion Rose Quarter freeway widening project, the likely $1 billion I-205/Abernethy Bridge/I-205 widening project and an as yet un-priced Boone Bridge project.  Collectively, these projects would be by far the most expensive infrastructure investment in the department’s history.  But the quoted prices for each project are just the tip of a looming financial iceberg.

A quick look at the agency’s history shows that it has invariably grossly underestimated the actual cost of the major projects it has undertaken in the past two decades.  Using data from ODOT’s own records and other public reports, we’ve compiled data on the initial project costs estimates (those quoted before construction commenced) and compared them with the latest estimates (either the actual final amount of spending in the case of completed projects, or the latest cost estimates for projects that have not yet been finished).  In every case, the ultimate price of a project was more than double the initial cost estimate.

This is important because ODOT is asking for permission to undertake a series of highway expansion projects, which, once started, will create a huge financial liability for the state of Oregon.  For three projects (the I-5 Bridge Replacement, the Rose Quarter and the Abernethy Bridge I-205 widening), ODOT is planning to sell toll-backed bonds to pay for part of project costs.  But if toll revenues are insufficient to pay bonds, or if costs escalate beyond current estimates, the state is fully liable to repay all these costs, and debt service on bonds, and these payments will take precedence over all other expenditures from state and federal transportation funds.  The failure to accurately forecast project costs for Portland freeway expansions, coupled with an unavoidable obligation to repay bondholders means that all other state transportation priorities, including even routine maintenance, would be in jeopardy.

Here is a closer look at seven major ODOT construction projects undertaken in the past twenty years.  Each one has experienced enormous cost overruns.

The Interstate 5 Rose Quarter Freeway project would widen a 1.5 mile stretch of freeway in Portland and was originally represented to the 2017 Oregon Legislature as costing $450 million. The latest estimates from the Oregon Department of Transportation are that the project could cost as much as $1.45 billion. 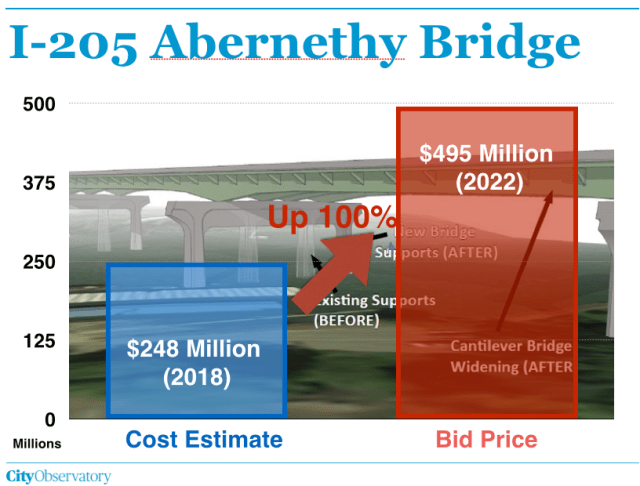 The Legislature directed ODOT to prepare a “cost to complete” report for the I-205 Abernethy Bridge project.  The bridge connects Oregon City and West Linn, and would be widened and seismically strengthened.  ODOT’s 2018 report said the bridge would cost $248 million.  When the agency put the project out to bid in 2022, the actual cost came in at $495 million–essentially double ODOT’s estimate.

ODOT estimated the 5 mile long Highway 20 Pioneer Mountain-Eddyville project would cost $110 million when the project completed its environmental reviews in 2003 (Federal Highway Administration and Oregon Department of Transportation. (2003). Pioneer Mountain to Eddyville US 20, Lincoln County, Oregon, Draft Environmental Impact Statement, Executive Summary).  After years of delay, including a design-build contractor withdrawing from the project, and ODOT having to demolish bridge structures and redesign significant parts of the project, its total cost was $360 million.

When proposed in 1999, it was estimated that the I-5 South Medford Interchange would cost about $30 million  (Rogue Valley Area Commision on Transportation meeting notes, September 13, 2005).   In 2013, after the project was completed the agency said the cost was $96 million.

It’s always possible to make excuses for cost-overruns on any single project.  And if cost-overruns had happened only once, or maybe twice, it might make sense to dismiss them as aberrations.  But as the record of these seven projects makes abundantly clear, major ODOT highway projects almost invariably ending up costing twice as much as the original price quoted at the time the project is approved.  Cost overruns are a systematic and predictable feature of ODOT’s approach to highway building, not an aberrant bug.

No accountability for cost overruns

In an attempt to quell concerns about the ODOT’s managerial competence, in 2015, Governor Kate Brown directed that the agency hire an outside auditor to examine its performance.  ODOT did nothing for the first five months of 2016, and said the project would cost as much as half a million dollars. Initially, ODOT awarded a $350,000 oversight contract to an insider, who as it turns out, was angling for then-ODOT director Matt Garrett’s job.  After this conflict-of-interest was exposed, the department rescinded the contract and instead gave a million dollar contract to McKinsey & Co, (so without irony, ODOT had at least a 100 percent cost overrun on the contract to perform their audit.)

McKinsey’s work consisted mostly of interviews with agency-identified “stakeholders” and a superficial analysis of ODOT data.  Its report focused on largely meaningless or trivial indicators such as “average time needed to process purchase orders.”  One part of the report purportedly addressed the agency’s ability to bring projects on time and under budget.  McKinsey presented this graphic, showing the variation between initial and finished costs for a series of mostly small projects.

There’s a striking omission, as revealed in the fine-print footnote:  McKinsey excluded data for the Highway 20 Pioneer Mountain Eddyville project.  This project, the single most expensive project that ODOT had undertaken, had a 300 percent cost-overrun, which the McKinsey report both failed to report correctly and which it described  as “performed 27 percent higher.”

The Oregon Department of Transportation doesn’t accurately forecast the cost of its projects, and refuses to be held accountable for a consistent pattern of errors.  Relying on ODOT’s cost estimates exposes the state to enormous financial risk, something that is likely to be magnified as the department moves ahead relentlessly with plans for billions of dollars of freeway expansion projects in the Portland area.

With all the millions of dollars spent on the first three or four studies we could have had a new bridge built by now.