In the winter, Jack Mertens likes to head to a mountain for snowboarding.

In the summer, he finds time for wakeboarding or trail riding on a motorcycle.

“I just do everything. I do it all. I’ll do whatever,” Mertens said. “I’m not too much of a daredevil. I’m more of a thrill-seeker.” 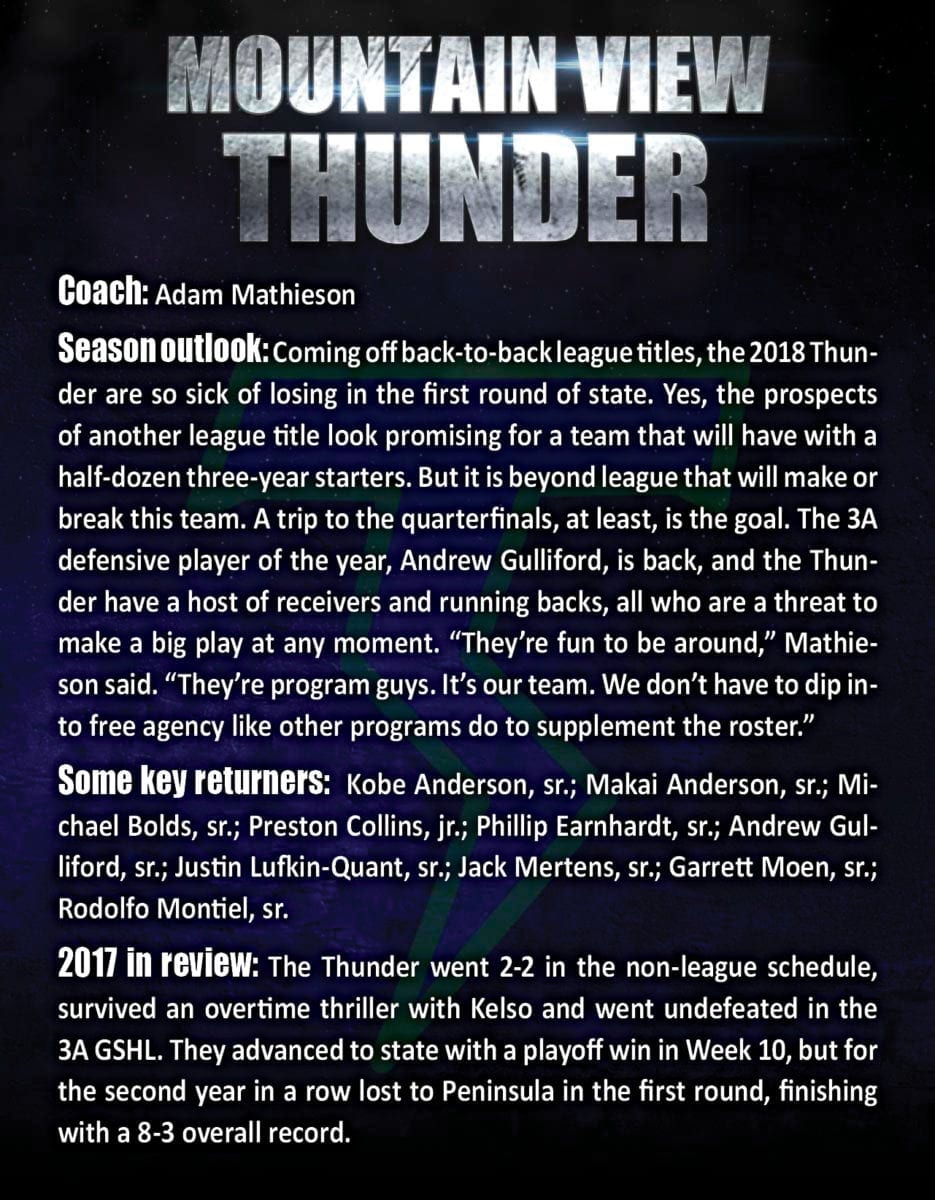 All of those activities make him an athlete, too. So it was no surprise to his friends that Mertens found almost instant success on the football field for the Mountain View Thunder when Mertens was a sophomore.

“I just tried out, showed up,” Mertens said. “I was expecting to play JV. But (a friend) said, ‘You’ll start varsity.’ Somehow, I did.”

Mertens had not played organized football for three years but by Week 2 in 2016, he was starting for the Thunder.

Now a senior, he has played in 21 varsity games, with 20 starts, and he is a big reason the Thunder are once again the team to beat in the Class 3A Greater St. Helens League.

Mertens earned first-team, all-league status as a receiver last year, but technically he played the Z position in Mountain View’s left coast spread Wing-T offense. Yes, he caught passes and made defenders miss, but he also got several carries.

This season, the athlete who says he will do “whatever” is moving to the featured back role for the Thunder.

“I want to get to a thousand yards rushing. That would be really cool,” Mertens said. “Mostly, though, the goal is just to win. I really want another league title.”

If the Thunder accomplish that, Mertens will be perfect for his high school football career: Three seasons, three league titles.

“The state title is the only thing everybody wants,” Mertens said.

While that is the dream, the Thunder would also be thrilled with making a long run in the playoffs. Or perhaps getting to eight regular-season wins. In the winning tradition of Mountain View football, that has never happened. The Thunder have won seven regular-season games many times, but never eight.

Of course, Mountain View always seems to have a tough non-league schedule. The Thunder, in fact, open with Union, a team that will likely begin the season ranked in the state’s top five among Class 4A programs.

Bottom line, the Thunder are not concerned as much with results in September as they will be in November. They have lost close games in the first round of state the past two seasons.

“I really want to get at least to the final four,” Mertens said. “We really are a huge veteran squad. We have the smarts. We are capable of getting there.”

One of the questions marks for this squad, though, is its offensive line. Mountain View’s high-power offense starts up front, and the squad graduated three gems.

Still, this is an established program. The Thunder do not rebuild. They just move on to the next wave of talent and expect them to rise to the challenge.

“Our line is actually looking pretty good,” Mertens said. “I ran behind them at camp. It was really, really fun. I’m excited to run behind them.”

The yards, the touchdowns, the victories, all will be added up on the football field. Mertens is proud to be playing alongside his classmates not just for the results, though. It is more than football at Mountain View. 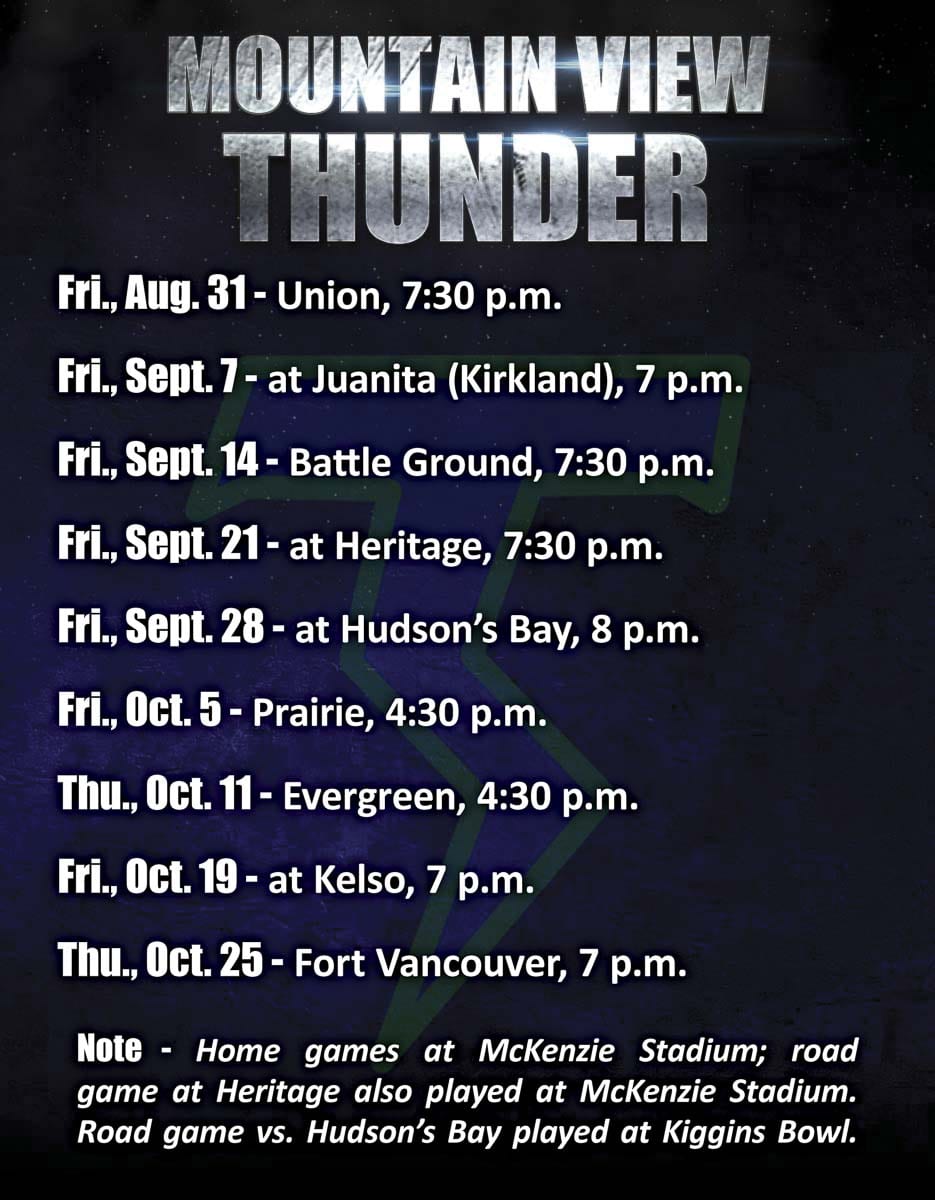 He started feeling burnout in another sport. His friends kept encouraging him to try football. Mertens is grateful.

“It’s the best coaching experience I’ve ever had,” he said. “Every single coach is amazing.”
He specifically noted head coach Adam Mathieson.

“All the work he puts in for the school, not just football. He puts way too many hours into the school. To The Top — that’s our scheme for life after football. At Mountain View, you feel welcomed.”

Mountain View wants to get to the top and stay at the top of the football standings. But also at Mountain View, former players stop by to talk about their successes after high school, and credit the values taught in the football program.

“They use To The Top wherever they are at. It’s not just for football,” Mertens said. “It’s a life thing.”

For Mertens, life is about trying new things, that thrill-seeker mentality.

Trying football in high school was a life changer. He wants to reward his friends for pushing him to play and he wants to honor his coaches by having the best possible senior season.