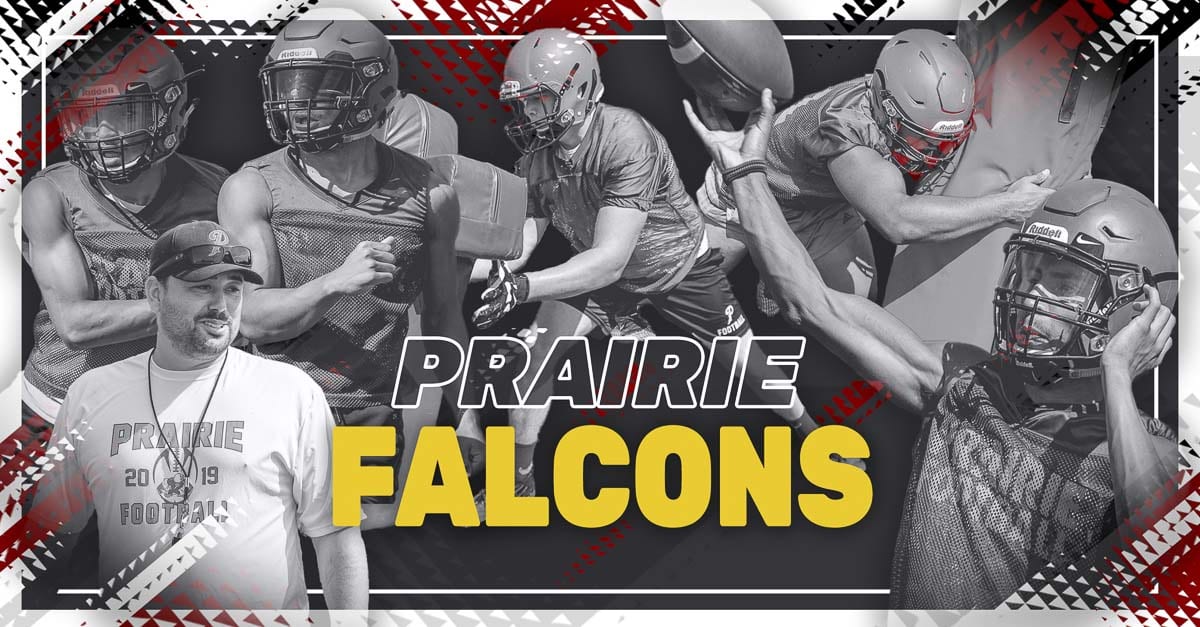 The head coach has gained some national recognition for the Prairie football program. Mike Peck, who uses Twitter and other social media to learn more about coaching and the game as well as the opportunity to praise his players, gained the attention of some national coaching groups. He was a guest on the High School Football America podcast, plus he was asked to write an article for the American Football Coaches Association magazine. All to talk about Prairie football, the community, the players, and the support system in place for the program. Here’s a link to the podcast: https://highschoolfootballamerica.com/podcast-mike-peck-talks-prairie-falcons-washington-high-school-football/

With an all-league quarterback returning to a team that made the playoffs in 2018, this season is a chance for the Falcons to show that they belong, that they are on the rise. Last year, the team had a winning regular season. These Falcons proved it could be done. They got past that hurdle. Now they want to prove they can win in back-to-back seasons.

A.J. Dixson with his development. Zach Brown, the team’s other quarterback, wowed the coaching staff, too. Treyce Teague (who moved to Prairie from Hudson’s Bay) has impressed Peck with his work, leadership, and maturity, as he learns a new system and meets new friends. The coach also loved the work of the offensive line.

In the spring, the Falcons went up against power programs such as Camas and Skyview in scrimmages and drills.

A.J. Dixson was voted all-league quarterback last year for the Falcons, and he has only improved, according to Peck.

Devante Clayton. Had an incredible offseason. He’s a running back on offense and an all-league defensive end. That is an odd combination, but it works for him, and the Falcons.

Zeke Dixson will see time at running back and receiver.

Then there is Treyce Teague, Nick Lawhead, Ian Davis, and newcomer Jimmie Barton as receivers/defensive backs. Barton finished sixth in Oregon’s Class 6A state meet in the 100 meters this past spring.

Tim Banaszek. “He’s a leader. The kids rally around him. As a center, he’s the glue that binds that group together.”

Christian Lowry. Big. Athletic. Can move well. Expecting him to have a big senior year.

“As head coach, you always want to take another step forward from the previous year. Goal is to make the playoffs and compete for a league title,” Mike Peck said.

Naturally, the Mountain View game is big on any team’s schedule. But before Prairie can compete against the top team in the league, perhaps a better test will be the battle against last year’s second-place team, Kelso. That game is on Oct. 4 and it is the first league game of the year for the Falcons.