Editor’s note: Opinions expressed in this letter to the editor are those of the author alone and do not reflect the editorial position of ClarkCountyToday.com’

In an email to his supporters Kent complains — “a dark money SuperPAC named ‘Conservatives for Stronger America’ has just dumped $724,000 into my race to prop up a spoiler candidate and split the vote so they can re-elect the Establishment’s RINO incumbent, Jaime Herrera Beutler.”

That is not the case. The creators of the PAC have legally declared the money is to be used pursuant to the campaign of Heidi St. John — and without her knowledge or her acceptance — not for Beutler. Proof of this can be found in the affidavit included at the bottom of the FEC report regarding the PAC’s expenditures on Heidi’s behalf, which Kent included in his email. I have copied it here:

“Under penalty of perjury, I certify that the independent expenditures reported herein were not made in cooperation, consultation, or concert with, or at the request or suggestion of, any candidate or authorized committee or agent of either…”

This provides legal and court admissible evidence that Heidi St. John did not accept, nor is in any other way connected to this PAC. For Kent — or his supporters acting with his knowledge — to claim otherwise without a single shred of evidence to support the claim is nothing less than dishonorable.

Even  if, as Kent alleges,  the PAC is running a shadow campaign for Beutler then that would only mean the creators of the PAC are supporting her — not that Heidi is supporting Her.  There is zero evidence to connect Heidi’s campaign to an underground effort to support Beutler.  Calling her a “spoiler candidate” is simply not true.

Heidi is a woman very devoted to her family. She loves them and wants their love and their respect in return. Is it reasonable to believe that she would drag them through the hardships of a major campaign such as this while only pretending to want to win? That she would daily feed lies to her own family, let alone her friends and supporters just to help Beutler?

She prays with her family, and with her friends, thanking God for his aid and guidance in this effort, and asking Him for his daily blessings on her, and on them, in the sacrificial efforts she and her family are making. This, she would do in pretense of wanting to go Congress to serve those she is praying with—when all she really wants to do is to help Beutler?

What is wrong with people that causes them to even suggest such behavior of a woman they hardly even know?

Nobody has produced any link of any kind between Heidi and Beutler which indicates that they have ever even had an acquaintance — much less a bonding in friendship that would evoke such a level of loyalty from Heidi towards her.

No such ties between the two exist. The very idea of it is ridiculous. As ridiculous as pointing to PAC money being spent on Heidi’s behalf and saying “Oh look — there’s proof that Heidi is supporting Beutler. “

No one other than Heidi, her family and supporters believe that a dark money PAC was organized just days before the primary to support Heidi after her running a distant third behind Joe and Jaime during the entire race.The only GOP candidate that’s an actual threat to JHB is Joe Kent.There is only one GOP candidate with connections to deep pocket, establishment money and that’s Jaime Herrera Beutler. Joe Kent clearly, concisely and correctly stated the obvious.

Heidi is the very definition of a spoiler, “a candidate who has no chance of winning, but whose candidacy still impacts the outcome of the election.” Despite Mr. Mosier’s attempt to muddy the water with irrelevant information and negativity, most people understand that silly, spoiler Heidi is simply a pawn at this point.

“No chance of winning.” That has a familiar ring to it. Probably because it’s the same line “Never-Trumpers” used in 2016 to support their false claim that Donald Trump was just a sham candidate clearing a path for Hillary Clinton to take the White House.

Jo may believe that Heidi has no chance of winning but apparently the donors to the Super PAC are willing to bet nearly three quarters a million dollars that she can. We will see.

This is integrity, claiming to be an America First candidate and using Trump’s photo in an apparent attempt to fool people into believing that Trump supporter her. Her campaign tactics are those of a power-hungry leftist. 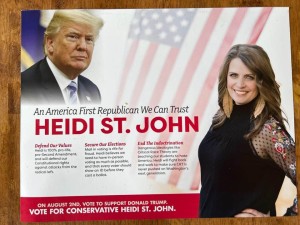 This post card image was not created by Heidi nor was she even aware of its existence before it arrived in the mail. It was created and distributed by the Super PAC, “Conservatives For Stronger America” on Heidi’s behalf. It does correct some misconceptions about just what a Trump endorsement really means in this case.

First, the endorsement not going to Heidi does not mean that Trump thinks Heidi is an unfit replacement for Jaime Herrera Butler, nor that Heidi has no right to be identified by herself, or others  who know her, as an America First Candidate. In the event that Heidi should win the primary reason dictates that Trump would support her in the November run-off.

Moreover, let us recall that putting America first has been a popular conservative political objective long before Trump arrived on the scene with his MAGA slogan.  To Put America first has for decades been the conservative policy objective in both foreign and domestic policy and a consistently popular plank in Republican Party Platforms.
The fact that the Trump team has adopted that popular phrase as their slogan does not mean that they own exclusive rights to it and that it may only be applied to the elite members of their team.

The fact that a group of conservatives who wish to remain unnamed created a PAC to support Heidi St. John implies that they do know her and her set of values well enough to know that she has consistently spoken to and advocated for the ideas and objectives to which the term “America First” implies. The postcard image does make a fair statement that  Heidi is a still a Trump supporter even though she did not receive his endorsement. And that she is still a conservative candidate who shares the same America First values as does Trump.

And let us recall that local Republicans have had many grievances against Beutler long before she cast the infamous impeachment vote. Still that single act was one offense too many and triggered the emotional element of the demand to remove and replace her. That in mind, it is fair to say that if you want to support Trump, voting to replace Beutler with someone she will like no better than she likes Trump—then vote for Heidi.

But is the image really an attempt to claim that Trump endorsed Heidi?  How logical would that be? The news of Trump’s endorsement was widely published at the time it occurred and has received much coverage in social media and radio talk-shows, not to mention a major talking point of Kent and his campaign for nearly a year now. To try to fool the voters to believe otherwise just makes no sense.  I don’t believe that is the message intended. Although, Kent supporters will put the most negative meaning to the image they can possible.

Why would you ask someone for their endorsement after a comment like this? Because you will say anything that you feel benefits your ambitions at the time? 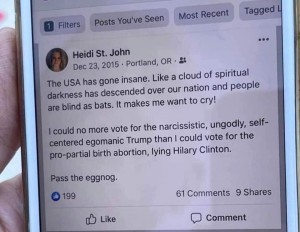 Heidi made those comments in December of 2015, nearly seven years ago, eleven months before 2016 election, and  at a time when there were many in Conservative Republican circles who had a negative view of Trump.

She did come to support Trump when she saw the fruit of his works and the dedication of his labors. Trump began acting on his pledges while he was yet only President Elect. He produced his list of Pro-life and faith-friendly court nominees, and once in the Oval Office he began, almost daily, showing a true Christian heart in his concern for people of all walks of life, especially but not limited to military and law enforcement people. People who Heidi also had great respect and admiration for. And there was his in-your-face determination to kick down the hitherto untouchable  pedestals on which liberal political-correctness had been mounted upon—almost in the manner of Christ overturning the tables of the money changers in the Temple. These were attributes not seen in any occupant of the White House in decades. So surely, a person like Heidi, with her set of values, would come to be one of Trumps strongest fans. And she has remained so even to this day.

The misinformation shows how desperate the Kent campaign has become. Go Heidi!

There is zero difference in positions between Heidi and Jamie. They are sisters with different mothers. We need a fighter in DC. Joe Kent!

I agree with Stephen Mosier that receipt of a big, unlikely campaign donation does not prove a candidate is running a spoiler campaign. Campaign strategy and how campaign donations are spent is better evidence. In this case, Heidi is running to unseat an incumbent. But Heidi’s campaign doesn’t spend much time attacking the incumbent. Instead, Heidi attacks Joe Kent, another challenger.  It is an odd strategy for a challenger. It splits the anti-incumbent vote but doesn’t take votes from the incumbent. Despite the fact a majority of local voters may not want to re-elect Jamie, Heidi’s approach increases the probability that Jamie can squeak through the primary with only a plurality. Even if Heidi does not intend to be a spoiler, she runs her campaign the way a spoiler would. Heidi has employed a losing strategy, jeopardizing the issues she says she supports. For me, the ability to make good strategic decisions is an essential quality for a person serving in the US Congress. It is often the deciding factor when I vote. It is why I am not voting for the incumbent.

Thank you for acknowledging that part of my comments on which we are in agreement.

While I have heard Heidi speak very forcefully against the incumbent she does focus more directly toward Kent. That said, there is merit to your looking at the campaign strategy in terms of who is be targeted by whom, however in this case it might not be as accurate a measure as in ordinary cases. This primary contest is anything but ordinary.

The unknown value is how many loyal supporters does Beutler have and will that number be greater than the votes taken by the winner in the Heidi versus Kent contest. It would seem that Heidi’s campaign strategy may be betting that Beutler’s loyal base is not that strong and if Heidi can beat Kent then she will beat Beutler as well.  That would explain her focus on Kent at this point in time.

I grant that that is speculation on my part as I have no inside knowledge of Heidi’s campaign strategy. Mine is merely an alternative theory to the one you suggested.

Thanks for the thoughtful reply.

Is that the same Heidi St John, the divisive hater that has ads running on the radio? It might be too late but when will we learn as a country that divisive politics, hate speech & proven lies along w/ the so called “woke folk” lead to the violence, death & chaos we’ve seen in the country for the last few years and ongoing. And the country continues to vote for the likes of this ilk on both sides. It’s sad really but it keeps the U.S. from trying to claim a moral high ground on anything. Not voting for her, don’t care how much she “approves this ad”!