RIDGEFIELD — Ridgefield Public Schools Superintendent Nathan McCann is a sweater-over-dress shirts kind of guy. He speaks with an earnest sort of energy about the multitude of challenges facing his school district.

“We’re really keeping our foot on the gas,” McCann says, “to continue to just try to keep up. We don’t have the capacity right now, bonding or otherwise, to get ahead of it.”

What he’s talking about is the rapidly growing number of students he’s responsible for as Ridgefield and the surrounding area braces for a massive influx of new residents. Visit just about any campus in the Ridgefield school district, and you’ll see portables dotting the landscape. With close to 3,000 students currently enrolled, and around 400 more expected next year, every school has been over capacity.

Last year Ridgefield voters easily approved a $78 million construction bond. That, along with $15 million in matching state funds, allowed them to build two new schools about half a mile south of the high school. The connected buildings will house the brand new Sunset Ridge Intermediate school for 5th & 6th graders, while View Ridge Middle School’s 7th and 8th graders will move from their crowded downtown location. The 145,000 square foot building features two gyms, along with a black box theater that will be used by all the district’s schools and the community. There is also a nearby outdoor sports complex, built in partnership with the city, which the schools will share with the public.

“Something I would want everyone to know,” says McCann, “there is nobody else that passed a bond in February of 2017 that’s opening up 145,000 square feet the following August.”

To accomplish that, the district front-funded the design elements, hoping to get ahead of inflation costs as construction continues to accelerate around the region. McCann estimates that foresight likely saved the district around $2 million.

“We knew the urgency of the work,” McCann continues, “and how desperately this space was needed. We also saw the inflationary costs associated with construction, and thought ‘we can save some money if we get this off and running.”

This Summer, construction will begin on a new two-story building on the high school campus, which will house a large media center, science labs, art rooms, and more (you can take a virtual tour of the new building by clicking here). The aim is to complete that project in time for the 2019-2020 school year. The district’s two elementary schools will also receive security upgrades as part of the 2017 bond.

But even with the rapid growth happening for Ridgefield schools, McCann says they’re barely keeping pace. The new school building will have room for around 1,200 students, but McCann expects around 1,000 students on opening day.

“Ridgefield has experienced some rapid growth,” he says, “but I really think we’re just on the precipice of some … almost hyper-growth. I don’t want to be too grandiose in the terms, but we might add 400 kids next year. That’s a sizable increase in one year. That’s like an elementary school. So we’ve already got sites situated for portables to come in on these campuses, which we anticipate likely happening in a couple year’s time.”

It’s worth realizing that the Ridgefield School District encompasses an area quite a bit larger than the city itself, and currently contains around 18,000 people. At current growth rates, that could reach 40,000-45,000 in 2035. That would likely equate to around 7,300 students in Ridgefield schools, but McCann says their current rate is actually outpacing those projections.

“It all kind of depends on exactly how dense things get around 179th, McCann said. “There’s a lot of possibilities of what could happen down there. It also depends on how much of Ridgefield’s growth is within the existing boundaries, and some of that’s also projecting taking a little bit of annexation of unincorporated Clark County.” 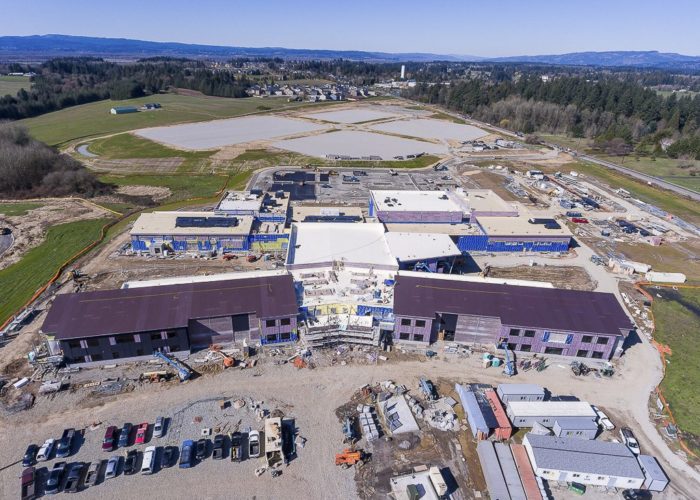 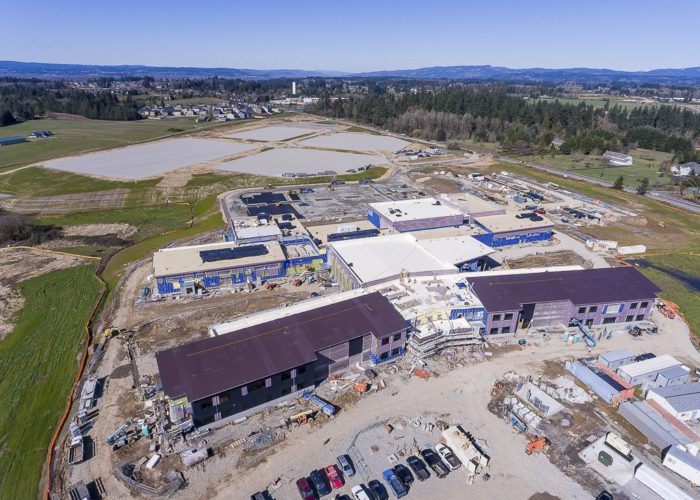 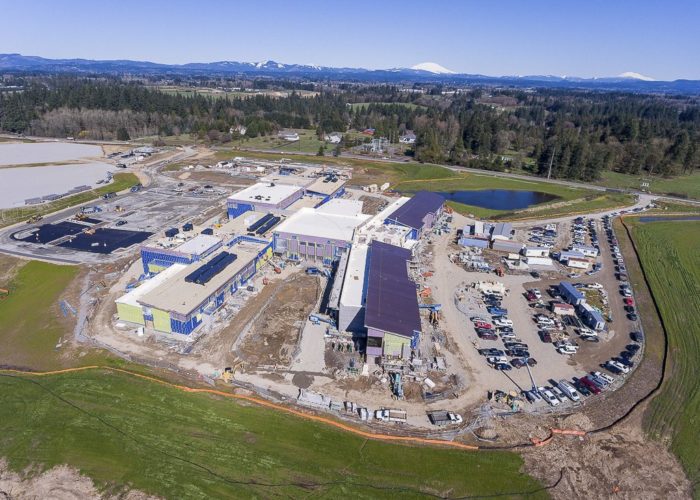 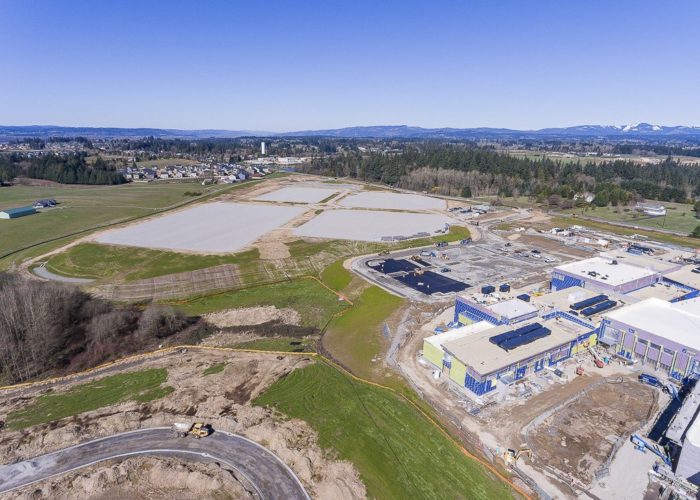 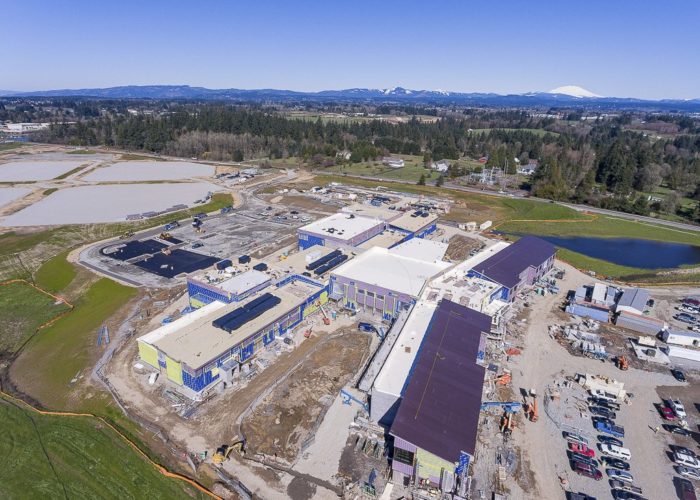 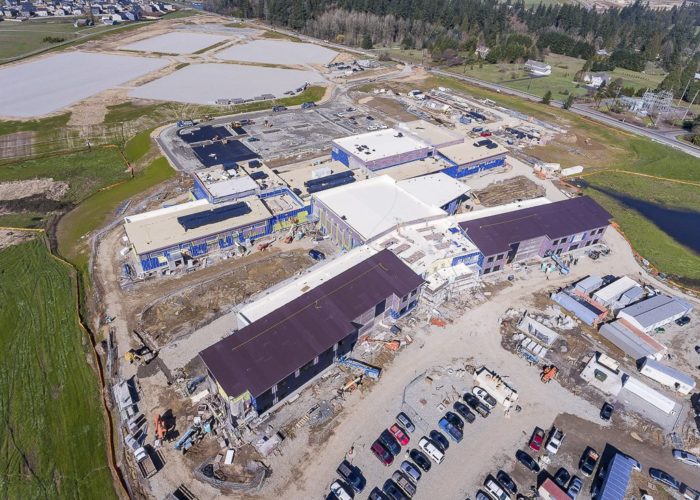 The 179th Street I-5 Interchange is a major wildcard in the potential growth curve for Ridgefield schools. At this point the state has declined to speed up funding for a major re-working of Clark County’s oldest freeway interchange, meaning nothing major will likely happen until 2023. Whenever those upgrades happen, it’s likely to lead to another area of potentially rapid growth between Salmon Creek and Ridgefield, within Ridgefield School District boundaries.

Facing a daunting struggle to keep fitting in new students, the district is preparing another construction bond to send to voters, likely in February of 2019. That would pay for a new elementary school, and further capacity upgrades for the high school. Like they did with the 2017 bond, the district is already planning the projects, and has secured a spot in queue with an architect, in hopes of speeding up construction should voters pass the next bond.

Even with all of that, McCann says they’re just trying to keep pace with the growth.

“These are all needs that one could argue we should be doing now,” he says, “but frankly we don’t have bonding capacity to do that. Take the political will out of the equation, just sheer bonding capacity would limit us from doing that.”

So the complicated shuffling of students and resources will continue. McCann believes that, should voters approve next year’s bond, they can at least get by for the next six years or so.

Looking ahead to 2035, barring a slowdown or recession, McCann envisions an alternative high school, along with a niche high school that may fit into the new Clark College campus coming to the junction near I-5. There would also be a third elementary school, and other expansion elsewhere.

But what if the growth isn’t there, and the schools end up not being needed?

“There’s nothing that bleeds resources more,” McCann says, “then trying to maintain and operate square footage that you don’t need. It’s very easy to open a new school, but trying to get a community to accept that it needs to consolidate a couple of schools … Voters are often in favor of that conceptually, but if it becomes your child’s elementary or middle schools, it’s like ‘well no, I was talking about the other one on the other side of town.'” 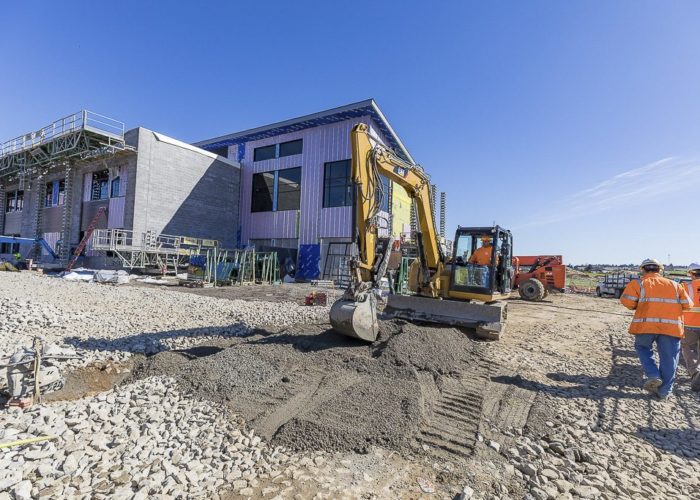 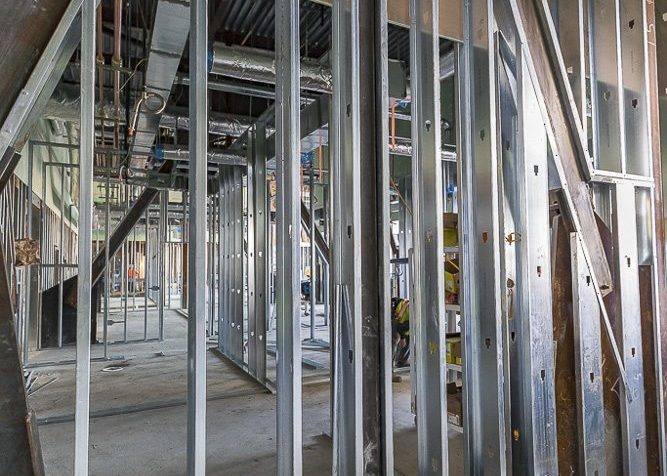 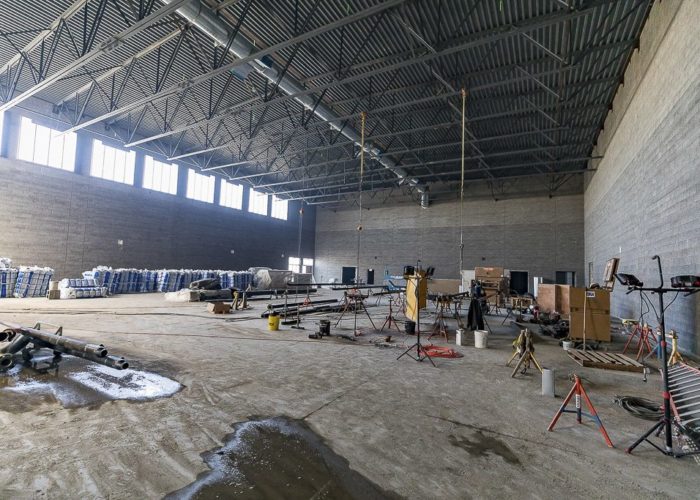 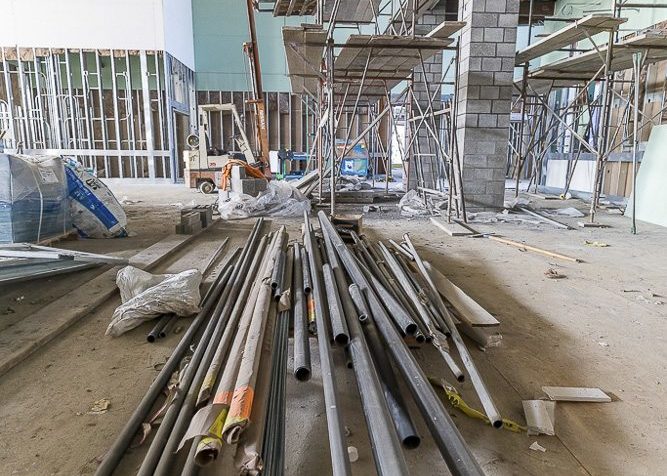 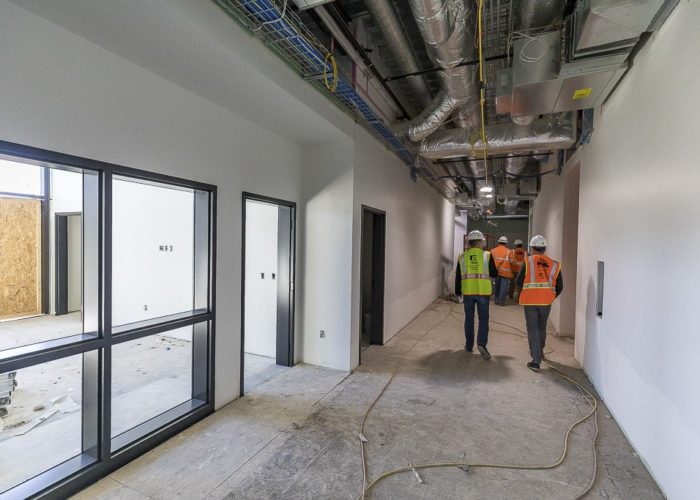 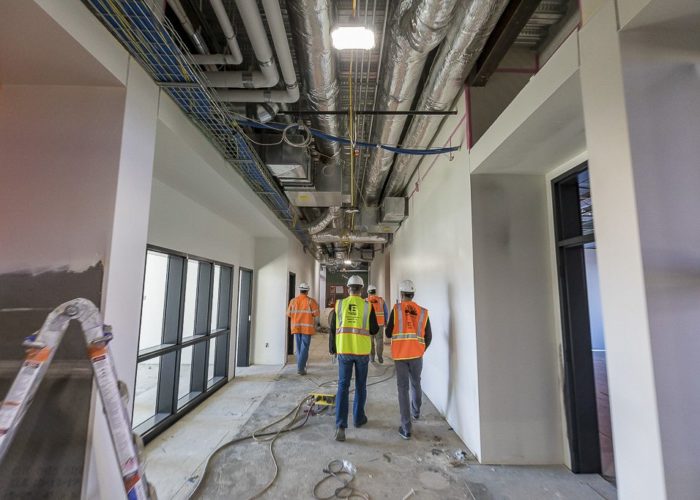 To avoid that, the district says the new View Ridge/Sunset Ridge school complex could, should the need arise, become a 6-8th middle school, with the current K-4 elementary schools becoming K-5’s. It’s flexibility, McCann says, and a hedge against a potential economic downturn in the region.

As for the existing View Ridge Middle School building downtown, it will become administrative offices shared by the school district and the city of Ridgefield, as well as an early childhood learning center.

“People say ‘you’re in need of so many classrooms, why are you closing View Ridge down?'” says McCann. “We cannot, by law, because of accepting state assistance money, use View Ridge during the school day for K-12 education.”

McCann will celebrate his fourth anniversary as superintendent of Ridgefield Schools this month. He came from Tucson, AZ, but says he and his wife and son (they’ve welcomed a second child shortly after moving to the area) fell in love with Ridgefield and the Pacific Northwest. He says he understands the concern long-time residents have about whether Ridgefield’s explosive growth will doom the sense of community the city is known for.

“My experience in my time in Ridgefield has been, folks that are moving here are all being drawn for the very same reasons,” says McCann. “They want a community that’s safe, that values its schools — the number one reason people move here according to the city’s own surveys is the schools. They want that proximity to some of the things that Vancouver and the Portland Metro have to offer, but they want a live/work/play type of community that has its own sense of who it is.

“One of the things I love best about Ridgefield,” McCann continues, “is that no one here ever refers to us as a suburb of Vancouver or Portland. We are our own place, and as trite as it may sound, there’s a tremendous sense of ‘Spudder Pride’ here. Whether you were ever a Spudder yourself, or it’s just your kids coming through that are Spuds, or you’re maybe just a citizen who moved here without kids but you’ve bought into this real sense of community.”

Ridgefield has a lot to be proud of, and a lot at stake. As City Manager Steve Stuart said in Part One of this story, growth isn’t good or bad. It just is. The only thing you can do is to try and make sure that a city’s sense of self-identity and pride isn’t lost as more people find their way in. If those things are sacrificed, as Port of Ridgefield CEO Brent Grening said, “Talent has the ability to move.”

Posted by Chris Brown
|Thursday, March 8, 2018
|in : News, Transportation
Ridgefield, Washington is poised for even faster growth over the next 15 years.
Read more

Posted by Ken Vance, Editor
|Friday, March 9, 2018
|in : Staff Opinions, Opinion
ClarkCountyToday.com Editor Ken Vance expresses his infatuation with the city of Ridgefield and discusses a two-part series of stories about growth in the city.
Read more
Tags:RidgefieldClark County