RIDGEFIELD — Although this is only her third year having her students write to senior pen pals at Mirabella Retirement Community in Portland, Union Ridge Elementary School first grade teacher Ellen Ferrin has done grade-level pen pals with his students for more than 20 years.

“It’s authentic reading and writing,” Ferrin said of having the students write pen pal letters. “I feel it makes it more ‘real’ for the kids.”

Ferrin, who just entered her 29th year as a teacher, said she has done pen pal letters with her students during most of her teaching career. She said learning to write friendly letters, explaining things and knowing their audience as students are all part of Common Core state standards, as well as the previous grade-level expectations prior to the Common Core standards.

Ferrin, 55, reaches out to friends and family to find pals for her students in the same grade. And three years ago, she started doing the senior citizen pals with her students. Ferrin said she plans to continue to do pen pals with other first grade classrooms around the country during this and upcoming school years, as well as senior pals with the Mirabella residents in Portland.

“The reason I chose that place (Mirabella) is because my parents live there,” Ferrin said. “My mother helped get others who were interested to participate. Now, every time I visit my folks (about two times a month), the senior pals ask about their last year buddies and then when they’re getting their new ones for this year.”

Last year, Ferrin said the pals were randomly matched up, each first grader with a senior resident at Mirabella. The goal of the activity was for the pals to ask and answer questions, getting a real dialogue going through their letters.

“I would suggest things if the kids were stuck,” Ferrin said. “Activities they liked to do, vacations they went on, and then questions about the senior pals’ careers and families, etc. Some students never needed assistance, while others tended to ask the same questions.” 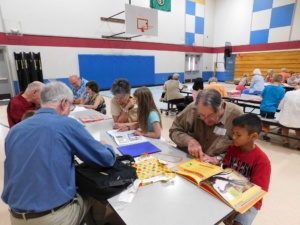 With the other classes the students also write letters to, Ferrin said it works out to about one letter written to one of their pals each week.

Late in the school year last year, Ferrin arranged to have Mirabella residents come to Ridgefield to visit their student pen pals at school. The visit was timed to also be at the same time as the release of autobiographies that were written by the students.

“The visit was amazing,” Ferrin said. “My class read an autobiography they wrote to their pals. They also took them on a tour of the school. The seniors gave each of my kids a book (their favorite ones). I had the seniors come visit us in Issaquah when we did it there, too.”

Ferrin said all of her students participate in the pen pals activity each year, 23 students last year.

Ferrin said the benefits of having the students write to different pen pals are many, including making connections with others; reading letters written to them; writing letters that answer questions and include details; feeling comfortable with senior citizens; sharing artwork; learning that writing is a way of sharing ideas and expressing themselves; learning that the elderly have a lot to share and teach and more.

“The senior citizens fell in love with my class,” Ferrin said. “We shared pictures and I told fun stories of what my kids said when they got letters when I saw them during my visits.” 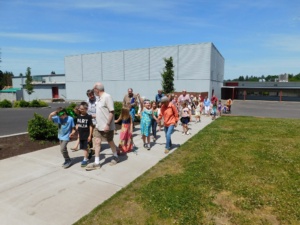 Ferrin said she received numerous emails from Mirabella residents last school year about how much they enjoyed and appreciated the pen pal experience. One email from Mirabella resident Marge Carothers said: “I can’t begin to tell you what an absolutely delightful time we had with Mrs. Ferrins’ students. Ellen is an amazing teacher and the students were so thoughtful and darling — I am so in love with dear little Addie. Talk about thoughtful! Addie took my hand so I didn’t have to use my cane.”

Ferrin was married for 22 years and has two children — Mikayla, 25, who graduated from Washington State University in Pullman in 2013, and lives and works in Southern California, working in reality TV — and Max, 23, who graduated from the University of Washington in 2015. He currently works at the Fred Hutchinson Research Center and is applying for doctorate programs for the fall of 2017.