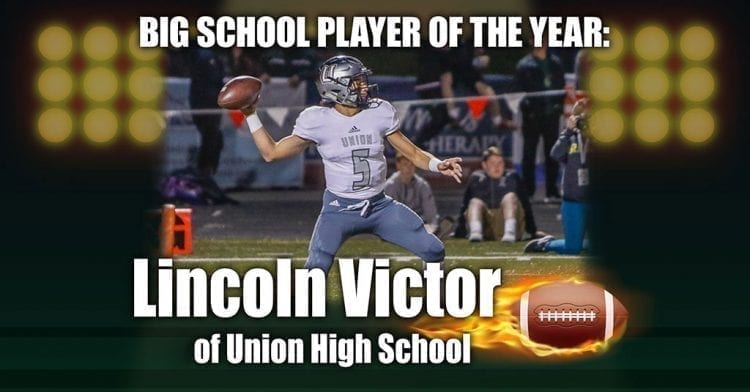 VANCOUVER — Before the Union Titans could play Camas in the football game of the year in the Class 4A Greater St. Helens League, they first had to make it become the game of the year by beating Skyview.

It was then that the Union Titans unleashed Lincoln Victor.

Oh, don’t get us wrong. Victor was strong all season. But what he did to Skyview in Week 8 was just incredible.

“I just embrace the big games,” Victor said. “That night, I was locked in 100 percent. I knew the offense. I knew the script, front and back. I knew their coverage, every play. It was like I knew what every single player was doing that night at one time.”

The next week, Camas’ defense did have Victor and the Titans perplexed for three quarters. But come winning time, in the fourth quarter, Victor got it going again, and the Titans rallied for the 14-13 victory.

“It’s been a while, the last time we beat them,” Victor said, remembering way back to 2009. “Year after year getting beat, and severely beat by them, it was a never-ending streak. Throughout the summer, we kept hearing, ‘You guys gonna be good? You gonna beat Camas?’ We were getting tired of it.”

Now, Victor said, the Titans have the bragging rights.

Union followed up the Camas game with a Week 10 playoff victory to advance to state.

For all that the Titans did, and with Victor leading the way, he is ClarkCountyToday’s big school Player of the Year.

The season did not end on a high note, though. Victor broke his right collarbone in the first round of the Class 4A state playoffs. Sumner ended Union’s season in Week 11.

“I wasn’t crying because it was hurting. I was crying because I spent the whole season with those guys and to come up short with two quarters left and not be able to finish with those seniors, that really killed me,” Victor said.

In fact, Victor confirmed, the injury happened one play before he left the game. He has broken his left collarbone three times in his life, so he knew exactly what happened.

“I wanted to stay in because that’s the drive I have,” Victor said.

One more play, though, and he knew. It was over.

“Overall, the season was full of hard work and definitely one to remember,” Victor said. “Working day-in and day-out, everyone had the mindset: Let’s get back to the old way of Union. Bring the standards back.”

That certainly happened in 2017. The Titans get Clark County bragging rights, too, for the offseason. But, Victor said, only until spring drills, when everyone starts 0-0 again as teams prepare for 2018.

Still, expectations will be even higher for Union next fall.

“We’re not chasing anymore. We’re being chased,” said Victor, who will return in 2018 for his senior season. “We’re the league champs. We made a pretty good run. The goal is nothing less than that. Keep going higher and higher until we all accomplish something we always wanted.”

Perhaps that will mean 14 games next season instead of 11.

Lincoln Victor should be cleared to resume athletic training this winter, and he expects a lot of his teammates, and a lot out of himself.