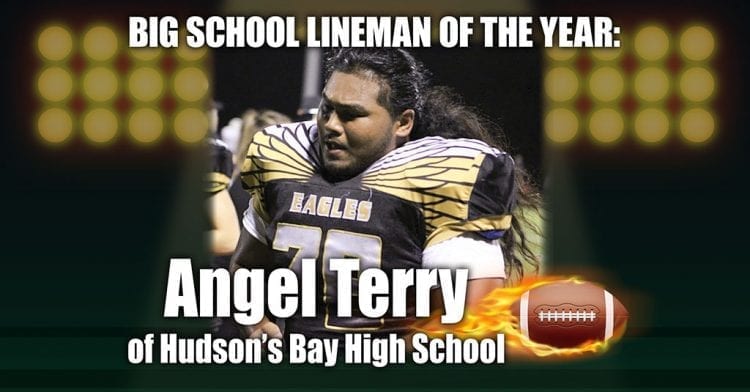 Senior was first-team, all-league on offense and defense, helping the Eagles to the football playoffs

VANCOUVER — Angel Terry learned just a few basics of the game, and not much else, before he moved to Vancouver and joined the Hudson’s Bay Eagles.

Together, though, they made for quite a team. Terry became one of the best players in the region, and Hudson’s Bay became a winner on the football field for the first time in more than a decade.

Probably not a coincidence.

Terry, now a senior, never knew how bad it was for Hudson’s Bay football. Why would he? Terry lived in Northern Mariana Islands, near Guam, before moving to Clark County prior to his junior year of high school.

In his first season of football in the United States, he earned first-team, all-league status as a defensive lineman. The Eagles went 5-4 for their first winning campaign since 2002.

This season, the Eagles won six games and qualified for the playoffs for the first time since 2001.

Terry was a huge key to the success. This year, he also shined on the offensive line, while maintaining his dominance on the defensive line. The coaches of the Class 3A Greater St. Helens League, in fact, voted him first-team, all-league on both sides of the ball — the only lineman to earn such praise.

For his efforts, and for helping Hudson’s Bay return to the playoffs, Angel Terry is ClarkCountyToday’s big school Lineman of the Year.

“Last year, I was just adjusting. I was new to everything,” Terry said.

After that first season with the Eagles, he believed he could do even more.

“I started pushing myself. I felt like if I dedicated myself to getting bigger and stronger, it would make me better for the upcoming year for football,’’ Terry said. “I knew it was my last year, so I had to do the best I could.”

He got so big, in fact, he had to change jerseys. A year ago, he wore No. 50. He sported that same jersey at the beginning of this season.

So he went to a larger size and finished his career at Bay as No. 78.

Hudson’s Bay coach Ray Lions said Terry, at 6-1, 295 pounds, is way more than just a talented big body. It is his work ethic that made him special.

Terry said he saw a quote that he has taken to heart.

Lions said Terry gets it.

“He has the talent, and the work ethic, which is why he’s getting the recognition,” Lions said. “Would he ever toot his own hor? No.”

In fact, Terry seems a bit taken aback by the attention.

“I don’t really like to boast,” Terry said. “I feel if you boast, the universe will put you down.”

Terry and the Eagles should feel good about themselves for what they have accomplished the past two seasons. Bay went 5-4 and then 6-3 in each regular season. The Eagles made the playoffs this fall. Oh, and those 11 wins in two seasons? The program had 10 wins in the previous seven seasons – combined.

“It just feels nice to be part of something,” Terry said.

He also said being part of this team helped him with his transition to his new home. It took some time, but his teammates are family now.

“Last year … I hadn’t felt like I earned their trust,” Terry said. “This year, I got to know all the players. We’ve been through a lot. We suffered together. We worked together.”

And then they won together.