Since 2017, Sound Transit’s full system expansion went from costing taxpayers $92 billion to an incredible $142 billion, and project completion was stretched from 2041 to 2046. That’s $50 billion in unanticipated expenses to deliver a project later than expected.

For perspective, that’s like adding a second Sound Transit 3 (ST3) tax to the plan. In 2016, voters were told ST3 would cost $54 billion but now it has become clear that the actual costs are far greater. Anticipated tax revenue (which includes sales and use tax, motor vehicle excise tax, property tax and rental car tax) increased from $60.6 billion to $88.9 billion. This huge increase will not add more elements to the plan, nor will it increase projected ridership. It only reflects the program’s massive cost overruns.

After all these dollars – and probably billions more – are spent, Sound Transit will have built a rail system that will likely carry fewer than 5% of regional trips, according to Puget Sound Regional Council (PSRC) data. Meanwhile, billions of dollars in desperately needed highway and road projects, including bridge repair and basic maintenance, remain unfunded.

Locally, Bellevue is experiencing unprecedented residential and employment growth due, in part, to tech companies like Amazon which plans to welcome 25,000 employees in Bellevue by 2025. Light rail plus Sound Transit’s overbuilt version of bus rapid transit called Stride is projected to carry only about 1.7% of daily trips in Bellevue by 2030. That was the assumption before COVID decimated ridership and fundamentally changed the commuting landscape.

Planners at the PSRC say that light rail ridership will “increase by more than tenfold over 2018 levels” regionally, but that forecast uses pre-COVID 2018 as a baseline and assumes a much higher percentage of households will live near transit systems (and thus will use them). Even Sound Transit’s friends at the Transportation Choices Coalition and Puget Sound Sage admitted in 2020 that “proximity to transit does not necessarily mean people will take it or that it provides a good transportation option.”

We should also keep in mind that the increase in light rail ridership sounds impressive, but a large share of that is expected to come from existing bus riders. In other words, these aren’t commuters who have been coaxed out of their cars but rather existing transit riders who, at great cost to taxpayers, merely switch from bus to light rail.  Even under the PSRC’s optimistic forecast, transit’s share of total trips in the region increases only slightly and trends suggest the reality is likely to fall short of the forecast. This is a very poor return on a very large investment.

Sound Transit officials admit they assume COVID impacts will continue beyond 2021 but are uncertain for how long. At the same time, they remain very certain that ridership, with the delivery of Sound Transit 3 (ST3) projects, will increase substantially:

Some will take light rail to work, to be sure. But the vast majority will not. According to Sound Transit, light rail ridership in January of 2022 is still 40% below where it was in January of 2020. While Sound Transit ridership has been very slow to rebound, traffic volumes on highways in the region are nearly back to pre-COVID levels. There is also growing evidence of a permanent shift to telecommuting for the office workers Sound Transit has assumed will make up a large share of their customers in the future.  If this trend persists, it will result in substantial underutilization of Sound Transit’s very costly light rail lines.

While taxpayers are on the hook to pay billions more for a system that will carry a small fraction of regional trips, Sound Transit’s farebox collections on light rail has plummeted, largely due to COVID, but also due to fare evasion and a lack of enforcement by the agency. In 2017, the agency planned for farebox recovery to cover 40% of operating costs. In 2020, farebox recovery dropped to 8%. The agency has continued to struggle with ridership and fare evasion, resulting in farebox recovery 35% below their goal set for 2021. 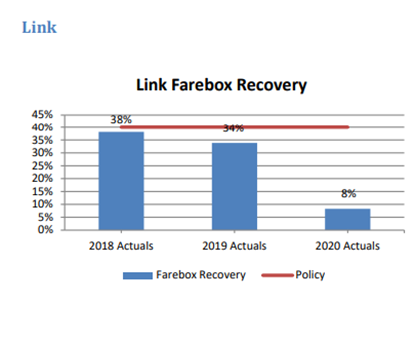 The agency’s financial plan through 2046 assumes fare revenue will cover less than 7% of operating costs, but it may still drop even lower. Such a large decrease in farebox revenue will eventually necessitate cuts in service, postponing major projects, or further increases in revenue from taxes or other sources.

The additional $50 billion carries a heavy opportunity cost regionally. For $50 billion, consultants at McKinsey & Company would say that King County could end the homelessness crisis four times over and have money left over. The remaining amount is nearly double the $3.8 billion in military aid the US has committed to Ukraine since Russia’s invasion in February.

As Sound Transit lowers its threshold for how much of Link’s ever-increasing operating costs will be covered by fares, and the agency continues to report change orders, cost overruns and delays, it seems appropriate for Sound Transit 3, passed in 2016, to be reconsidered by voters or put on hold by the Sound Transit Board. Light rail should be subjected to a comprehensive performance and cost audit, and perhaps shrunk to an affordable, cost-effective program. Moving away from rail expansion in ST3 and supporting the efficient, flexible and cost-effective versions of bus rapid transit implemented by King County Metro and others could expand the regional transit network quickly. Partnerships with the private sector that deploy innovative, on-demand mobility options for customers would modernize a transportation mindset that is stuck in a pre-COVID and pre-smartphone world. The ST3 plan is a massive undertaking, but it should be guided by the region’s evolving needs, not stuck on a concept that no longer fits our rapidly emerging future.

Coming clean about ST3’s increasingly apparent problems and making changes is politically difficult but necessary to regain the public’s trust. Voters should be given a voice in how to move forward given all that has changed since 2016, and is expected to change by 2050.  A fresh and honest look at Sound Transit’s finances and plans, by the Board and the public, would be a timely pivot away from the even deeper money pit ST3 has become.

Mariya Frost is the director of the Coles Center for Transportation at the Washington Policy Center.

“Planners at the PSRC say that light rail ridership will “increase by more than tenfold over 2018 levels” regionally, but that forecast uses pre-COVID 2018 as a baseline and assumes a much higher percentage of households will live near transit systems (and thus will use them).”

Similar reality in Portland metro
“Currently, transit ridership accounts for about 1.7 percent of I-5 cross river traffic.,,”
“During an April 7 meeting of the Executive Steering Group (ESG), Johnson said demand for transit on the I-5 corridor would increase 10-fold, to 26,000 to 33,000 boardings a day.
C-TRAN offers the only cross river transit service via its “express” bus service. Ridership had declined from 3,040 boardings in 2016 to 971 in 2020.”

“TriMet has a history of broken promises, when it comes to light rail. It appears to be short 50,000 boardings for the two newest light rail lines, when compared to the optimistic ridership projections.”
full article https://www.clarkcountytoday.com/news/ibr-pushes-lower-light-rail-cost-at-rtc-board-while-medvigy-questions-path-forward/

In Oregon, and Washington, a consistent marketing tactic for light rail expansion is wildly optimistic ridership forecasts, based on assumptions that are not revealed.
Coupled with unrealistically low cost estimates, the project is falsely made to appear to serve many for less $$ than will be needed.