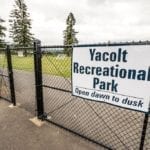 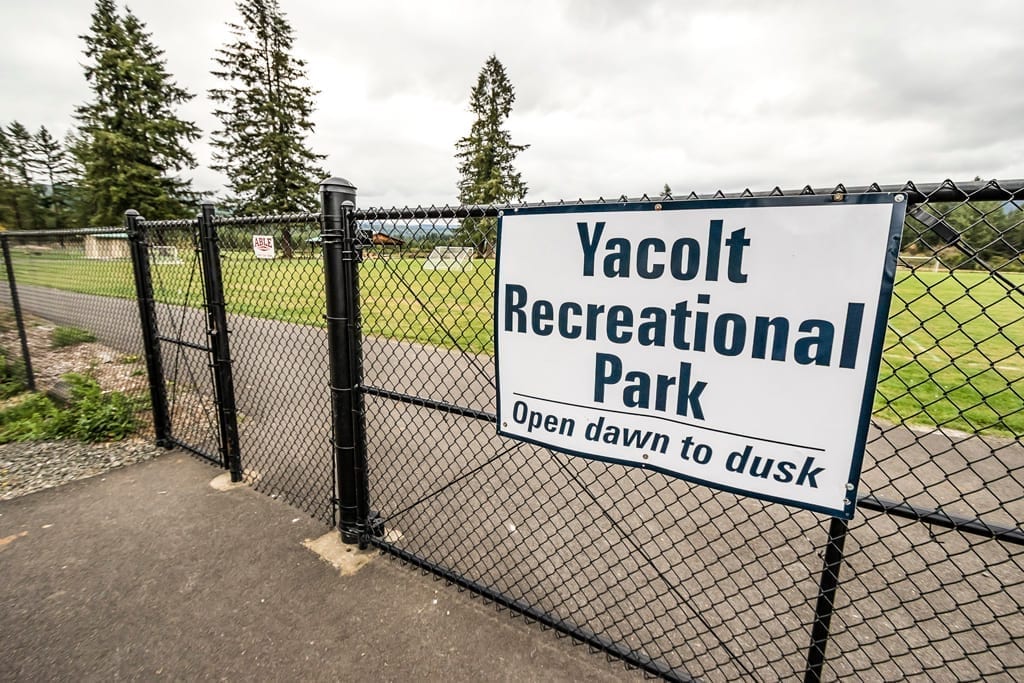 Yacolt hopes to continue to add to town’s rec park

YACOLT — Over the past few years, the town of Yacolt has continually been able to add features to the Yacolt Recreational Park, located at 26612 NE Hoag St. Officials within the town hope they can continue to add to the park over the next several years.

Cindy Marbut, Yacolt’s clerk-treasurer, said that they currently considering a parks grant in 2017 to add exercise equipment to the walking path that is currently in the park, in order to increase health awareness in the community. Currently, the park is home to several different recreational features, including a paved walking pathway, a pavilion, a BMX bike track, fenced dog park and an eight-hole disc golf course. There is also a soccer field.

“We built the park for several reasons,” Marbut said. “We had funding in our Park Impact Fund that needed to be spent and it had to benefit the housing development area, and we were able to obtain a Community Block Grant to help purchase the property and fund the project. The property could be used in the future to house a treatment area for sewer if we were to go in that direction.”

According to the Town of Yacolt Recreational Park Master Plan, the was “to provide an expansive open space for local community and family activities. The area would also provide the town with the ability to install an underground treated effluent disposal field for a future wastewater treatment plant. These two uses could coexist without any impact on either project.”

According to the background information in the Master Plan, the initial plans for this park project date back to 2007 when Clark County was updating its Growth Management Plan. During that time, officials from the town of Yacolt went before the Board of Commissioners to ask for a rural reserve area. The commissioners agreed to the request, but with some conditions, one being that the town be required to write and have an approved general sewer plan.

The general sewer plan and the wastewater facility plan were approved in the winter of 2012 by the Department of Ecology, which also approved the acreage east of the town.

During the summer of 2011, town officials began discussing purchasing the approved wastewater facility disposal area. The area included 10 acres of pasture land. Officials also saw the need for a park for the newly developed residential quadrant of the town. After applying for funding through the Community Development Block Grant (CDBG) for the 2012 fiscal year, town officials also began work on the initial phase of the project, which included purchasing the property, installing a gravel parking area and installing a soccer field. The cost of this phase was $192,627.

According to the Master Plan, in May 2012, the town staff, along with inmates from Larch Corrections Center, began clearing the property and gathering donated supplies for the project. Construction began in spring 2013 and the initial phase was completed by September 2013.

Another grant was applied for in 2012 in order to install water at the park, install a pit restroom, install walking paths, dog park, a horseshoe pit and a disc golf course. The street was also widened. The cost of this phase was $201,960, and was paid for by remaining impact fees, in-kind labor and the CDBG program.

In order to build a pavilion and run electricity to the structure, town officials applied for another grant in 2013. The cost of this project was $102,000 and was completed in June 2015. In the summer of 2014, the town built a kiosk for the dog park area, and also received a $1,000 grant from the Association of Washington Cities to purchase programmable locks for the restroom facility. The town also provided the labor and equipment to build a BMX bike track for the town’s youth.

“The BMX track was the idea of the inmates from Larch that were helping with labor on the project,” Marbut said. “It was their idea to use the leftover dirt for the track and the idea was presented to the mayor by the Public Works Department.”

In July of 2015, the town was able to pave their remaining gravel pathways in the park, ensuring ADA accessibility to the entire park.

Marbut said the pavilion at the park is open to the public, but can also be reserved and rented for $10 per hour and a refundable $35 garbage deposit. The soccer field is currently being used by American Youth Soccer Organization (AYSO) soccer, and Marbut said town officials hope to put removeable bleachers in at at some point, although they are not sure when since they are quite costly. They are also seeking concrete picnic tables to place there, but those are also very costly.

The Master Plan for the park will be updated annually. According to the plan, the town has been encouraged by the outpouring of community use of the park. Residents are often seen walking and jogging on the paths, the soccer fields are constantly in use by local community youth teams, children are often seen riding their bikes on the BMX track, and families and a lot of youth have come out to play disc golf.

The plan states: “The park has proven to be a very useful and pleasant commodity and it’s the town’s goal to continue to add new attractions and to upgrade the facilities as funding becomes available.”