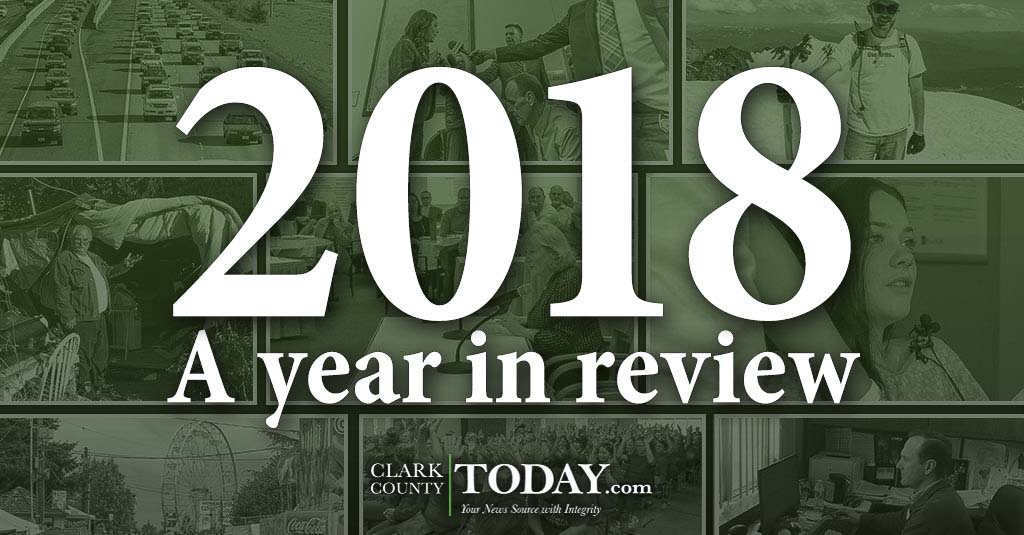 ClarkCountyToday.com offers a lens with which to view a glimpse of the past 12 months in the area

The staff here at ClarkCountyToday.com has enjoyed bringing you the news that matters most to Clark County residents over the past 12 months.

The calendar year 2018 has been eventful time for area residents, who have followed stories that have greatly impacted their lives. School districts experienced teacher strikes that delayed the opening of classes for most students. A general election resulted in the elevation of a new county chair and also resulted in a veteran Congresswoman returning to the U.S. House of Representatives by a surprisingly narrow margin.

Clark County residents followed along as lawmakers and elected officials continued to struggle with agreeing on a solution to the traffic congestion issues that commuters face on I-5 and I-205. A new county manager was named this year, just the second since the Home Rule Charter was approved by Clark County voters in 2014.

Development and growth continued to be topics in Clark County in 2018. Area residents around the county also experienced joys and sadness and ClarkCountyToday.com was here for you every step of the way.

Here’s a look at some of the top stories of the past year, in no particular order:

After lawmakers in the Washington State Legislature attempted to finally come up with a solution to the education funding crisis in the state, created by the McCleary Decision, teachers across the state demanded for raises of 15-25 percent to be paid for by an additional $2.1 billion in funding designated for the next two years. However, officials from area school districts offered projections of future budget deficits that would result from the legislature’s decision to also cap local school levies.

In Clark County, the La Center School District was the only to start on time as teachers in every other district voted to strike in search of the higher salaries rather than joining students in the classroom. Fortunately, the strike didn’t last long, as most districts were able to reach agreements with their teachers after a few days or weeks of closed classroom doors. In most cases, teachers’ unions were successful in negotiating double-digit percentage salary increases for their teachers.

One of the ongoing stories we will be following in 2019 will be the impact of those higher teachers’ salaries as school district officials predict significant staff reductions and belt-tightening decisions that will be the result of an unsustainable economic model in the industry.

Posted by ClarkCountyToday.com
|Wednesday, August 29, 2018
|in : News
With salary negotiations still up in the air, nearly all Clark County schools are on strike as of Wednesday.
Read more

When the first returns of the 2018 general election were issued by the Clark County Elections Department on the evening of Nov. 6, Democrat Eric Holt held a lead of more than 2,000 votes over Republican Eileen Quiring in the race for county chair. Three weeks later, it was Quiring who had a victory, by a margin of just 986 votes (0.52 percent). Outgoing County Chair Marc Boldt failed to advance from the field of four candidates in the Aug. 7 primary election.

Congresswoman Jaime Herrera Beutler said she was “humbled’’ after voters narrowly returned her to Washington DC for a fifth term in the U.S. House of Representatives. Herrera Beutler had won previous elections in Washington’s 3rd Congressional District by more than 20 points but in 2018 Democrat Carolyn Long gave the veteran congresswoman a run for her money after her campaign raised $3.85 million in donations, a million more than Herrera Beutler. Long actually defeated Herrera Beutler by more than 2 percentage points in Clark County, but district-wide results gave the Battle Ground resident a 6 point victory.

Other notable election results included Rep. Vicki Kraft’s narrow victory over Tanisha Harris in the race for position 1 in the 17th District. Kraft, the incumbent, returns to Olympia with a victory margin of just 859 votes (1.4 percent).

It took the Clark County Council more than a year to find a new county manager after Mark McCauley was fired in the spring of 2017. Members of the council voted unanimously to hire Shawn Henessee, who was the former city administrator in Pleasant Hill, Missouri, which has a population of just 8,000 people. Henessee was selected from a group of three finalists.

Posted by ClarkCountyToday.com
|Thursday, May 31, 2018
|in : News
About a year after the firing of Mark McCauley, Clark County has a new county manager. The council on Thursday announced the hiring of Pleasant Hill, Missouri, city admin...
Read more

Henessee sat down with ClarkCountyToday.com reporter Chris Brown for an exclusive interview later in the year.

Posted by Chris Brown
|Friday, September 21, 2018
|in : News
New Clark County Manager Shawn Henessee sat down with ClarkCountyToday.com after his first six weeks on the job to talk about how things are going
Read more

Without an official tally, there was likely no other topic that occupied the attention of Clark County residents more than the quest by area lawmakers and elected officials to address the area’s traffic congestion issues.

ClarkCountyToday.com was there every step of the way, informing the public of all aspects of the conversations surrounding the issue including the effort by Oregon officials to place tolls on I-5 and I-205, which is now awaiting approval at the federal level.

Tolling debate now in the hand of the Oregon Transportation Commission

Posted by Chris Brown
|Friday, July 13, 2018
|in : News, Transportation
The Oregon Transportation Commission heard from more than forty community members as they take on the next steps to bring tolls to I-5 and I-205 in Portland.
Read more

Another aspect of the issue included the attempt by a majority of area lawmakers to create a new I-5 Bridge replacement project, which many in the community view as a resurrection of the failed Columbia River Crossing.

Posted by Chris Brown
|Friday, December 14, 2018
|in : News, Transportation
A meeting between lawmakers from Washington and Oregon this week took place to discuss the possibility of reviving plans to replace the aging Interstate Bridge on I-5.
Read more

Clark County continues to be a desired destination for those looking for a better way of life and the growth in population has county officials and area municipalities scrambling to plan. Perhaps no other area of the county has been affected more than the city of Ridgefield. In March, ClarkCountyToday.com offered a two-part series providing insight about how Ridgefield officials were preparing for continued growth.

Posted by Chris Brown
|Thursday, March 8, 2018
|in : News, Transportation
Ridgefield, Washington is poised for even faster growth over the next 15 years.
Read more

The Vancouver Waterfront Development continues in many stages and forms. In September, ClarkCountyToday.com provided coverage of the grand opening of the new 7.3-acre Waterfront Park, the centerpiece of a $1.5 billion development by Gramor Development.

Posted by Chris Brown
|Monday, October 1, 2018
|in : News
Thousands turned out on a cloudy Saturday morning to be among the first to enjoy Vancouver’s new 7.3-acre Waterfront Park.
Read more

As you already know, life in Clark County isn’t just about issues facing government and elected officials. People make Clark County the unique place it is and ClarkCountyToday.com offered many glimpses into what life is like in the area community.

Many of us gasped in shock this summer when a 16-year-old was pushed by an acquaintance off the Moulton Falls Bridge in North Clark County. The victim, Jordan Holgerson of Kalama, suffered a punctured lung, along with severe bruising and welts all over her stomach and legs when she fell 60 feet after being pushed by an acquaintance, 18-year-old Taylor Smith, who was later charged with Reckless Endangerment.

Teen pushed from Moulton Falls Bridge speaks out from hospital

Posted by Chris Brown
|Thursday, August 9, 2018
|in : News
A 16-year old who was pushed from Moulton Falls Bridge on Tuesday spoke Thursday from PeaceHealth Southwest Medical Center where she’s being treated for injuries suffered...
Read more

Our growing population, combined with rising prices in the housing market, has led to a homeless problem throughout the county. In April, ClarkCountyToday.com took an in-depth look at how the homeless crisis has expanded to the North Clark County area.

Posted by Chris Brown
|Tuesday, April 17, 2018
|in : News
The booming housing market has left more people homeless, and many are spreading into more rural parts of Clark County.
Read more

Then ClarkCountyToday.com reporter Eric Schwartz provided a first-person tour guide of how not to climb Mount St. Helens. Area residents observed the 38th anniversary of the famous eruption that made news all over the world.

A tour guide: How not to climb Mount St. Helens

Posted by Eric Schwartz
|Thursday, May 17, 2018
|in : People
Friday marks the 38th anniversary of the May 18, 1980, eruption of Mount St. Helens. ClarkCountyToday.com reporter Eric Schwartz decided to climb to the summit in celebra...
Read more

For many area residents, the Clark County Fair is the biggest event of the year. That was no different in 2018, when everyone flocked to the 150th edition of the Fair. ClarkCountyToday.com was there to provide you with all the sights and details.

A day at the Clark County Fair

While completing just our second full calendar year providing news coverage to Clark County residents, ClarkCountyToday.com reached significant milestones in 2018. Visitors to our website have doubled in the past year and members of our staff are very appreciative to our loyal and engaged followers.

Two of the most significant developments in the past year at ClarkCountyToday.com were the additions of reporters Chris Brown and Jacob Granneman. Each has made a significant impact on the content we provide to area residents.

ClarkCountyToday.com adds another award-winning reporter to its staff

ClarkCountyToday.com was founded in June of 2016 with the mission to serve Clark County residents by offering objective coverage of the issues that impact them the most. After the launch of the website in September of 2016, the focus was on building and developing the site, which is free to all users. However, in 2018, ClarkCountyToday.com began accepting paid advertising on the site.

The staff at ClarkCountyToday.com wishes to thank Gaynor’s Automotive, which became the first advertiser to be featured and is still a loyal supporter of this venture.

Business profile: Gaynor’s Automotive stays one step ahead of the technology