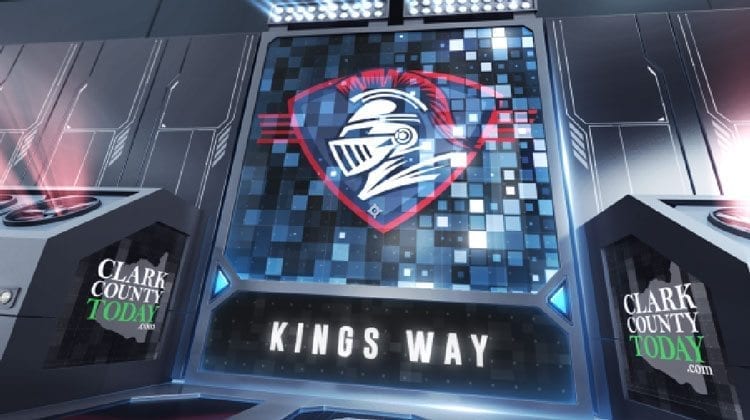 The Knights celebrate the victory of the year for their program, a stunning performance on the road.

How’d they do this?

“It’s the kids not giving up, especially with the scores we’ve had the last few weeks,” King’s Way Christian coach Tom Schroeder said. “We had a good week of practice. We figured we’d do our best, see what we can do. Find out what we’re made of, pride.”

Schroeder said he pointed to his heart throughout the week.

“Let’s see if you got a little bit of this,” he told his players.

King’s Way Christian went out to a 14-0 lead. The offensive line was creating holes. The defense was shutting down the opposition.

“This week, our ground game was dynamite. Our offensive line did a heckuva job,” Schroeder said. “Finally got to the next level of blocking instead of being one-hit wonders.”

The offense was led by Gage Koenders, who rushed for 194 yards and two touchdowns. Kefentse “Bubba” Cason also had a touchdown, and Kemper Shrock threw a TD pass to Bryce Dodge.

White Salmon rallied to tie the game at 14 midway through the fourth quarter.

Again, the Knights got it going on offense, scoring a touchdown with 46 seconds to play for a 21-14 lead.

Neither team scored in the first overtime possessions, with White Salmon missing a field goal.

White Salmon got the ball first in the second OT period, and Riley Danberg got the interception for the Knights.

From there, King’s Way Christian took advantage of a defensive pass interference call, and Koenders capped his incredible night with a touchdown run for the win.

“The kids went nuts. That was pretty cool,” Schroeder said.

“We all needed that. Not just the players, but the coaches, too. That was a huge morale burst for all of us.”

Defensive MVPs: Danberg with the interception, and Chandler Wann and Nate Snider with their great play from the defensive line, the coach said.

Thoughts on Week 8 vs. Stevenson: “I’m going with the same attitude,’’ Schroeder said. “Just have fun and keep grinding. Not putting any pressure on them. We’re just going to play football,” Schroeder said. “Stevenson is big. Of course everybody is big against us. They have a couple dudes we have to be aware of.”