VANCOUVER — They did so much last year, yet they know that they can do so much more.

Interestingly, they will have to do a lot more just to get some to really, truly, honestly believe in them.

That’s just the way it is at Hudson’s Bay.

The Eagles had their first winning season since 2002 last year and they bring back seven players who made the all-league team, including three who were honored for two positions.

“Everyone thinks we’re still the underdog. That’s fine with me,” Cadiz continued. “I’m fine with people thinking, ‘Oh, it’s Hudson’s Bay.’ We’re going to smack you in the mouth.”

Still, even with the 5-4 campaign, the Eagles know they let at least one get away. That cost them, too. Bay went 2-3 in the Class 3A Greater St. Helens League, tied with two other teams for third place. Bay missed out in the tiebreaker.

The Eagles are in a bit of a conundrum, too. They know last year is over and they must move on, but they also want to use last year as motivation.

“We all know we still have more to do,” said senior Myles Artis. “We have a chip on our shoulder. Still unfinished business.”

Artis and Cadiz said all of the Eagles understand what it is going to take to finish the job. They took turns explaining the team’s philosophy going into the 2017 season.

“We had a winning season last year but we haven’t done anything yet,” Artis said.

“You can tell when a team starts getting satisfied,” Artis said. “We wouldn’t allow that from our teammates.”

“Nothing is handed to you,” Cadiz said. “You have to work for it.”

New coach Ray Lions has to love hearing those words. In fact, he knew he was taking over a talented team when he was hired. Now he knows that talent also shows up in the weight room. He knows these players are committed to doing something special.

After what he has witnessed in this summer offseason program, he said the Eagles could contend for a league title. Yes, Mountain View is still the top dog, he said, but he expects his squad to be in the mix.

“The thing a coach is looking for is experience,” Lions said. “The game slows down for them.

They should have the mentality of ‘I’ve seen this, I’ve prepared for it, now I will bring a higher level of play because of that.’”

At the same time, he does not want his returning all-leaguer players to think it’s all on them to make it happen.

“We have a lot of new guys that people are not aware of,” Lions said. “We look forward to highlighting the new guys, too.”

That would have to include Brian Perez, who played tight end last year but is stepping in at quarterback this season. Lions said he walked into practice this summer as if he has been playing QB his whole life.

Perez has plenty of talent around him, too.

Cadiz had more than 1,100 yards from scrimmage and rushed for 11 touchdowns in his all-league performance. He also made all-league as a returner.

Artis averaged more than 10 yards per catch as an all-league tight end, and was also all-league at linebacker.

Carter Morse averaged more than 20 years per catch as an all-league wide receiver. He also was a shutdown cornerback, earning all-league status there, too.

If the offense stalls in the red zone, all-league kicker Alfonso Barajas is back, too, to add more points.

The Eagles have a stellar lineman — Angel Terry — and a dominating linebacker — Akilotoa Kaumatale — to anchor the defense.

Eventually, if all goes to Lions’ plan, others will start to realize the talent at Hudson’s Bay.

Of course, he does not mind if, in his first season, other teams will still think of the old Eagles.

“Years of not being successful at Bay, people have written us off,” Lions said. “A lot of people do realize a lot of weapons are coming back, but they will overlook us and look toward the ‘top-tier team.’ We’ll use that to our advantage.”

“As soon as you look over us, that’s when we’ll step over you,” Artis said. 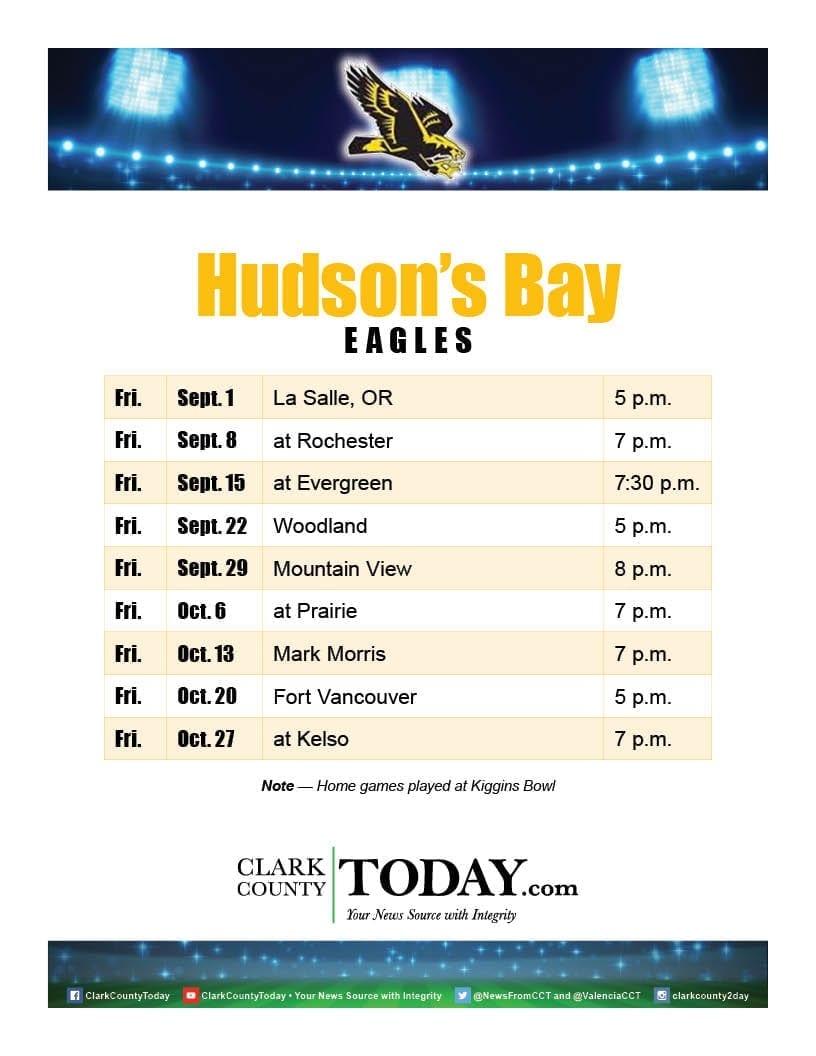