WOODLAND — They are cruising, yet they say they will not go into cruise control.

The Washougal Panthers still have a lot to prove.

Midway through the Class 2A Greater St. Helens League’s girls basketball schedule, the Panthers improved to 6-0 with a 30-point victory over second-place Woodland on Tuesday.

Yes, a 30-point win. Over the team that has now dropped into a three-way tie for second place.

“I didn’t think we’d beat them by that much,” Bea said. “That team is always solid.”

Yes, but Washougal is in a groove these days.

The Panthers now have a two-game lead over the Beavers as well as Hockinson and Mark Morris. Washougal’s closest victory in league play was a 12-point decision. The Panthers also believe they are just getting started.

“Now that we’ve seen all the teams we’ll be even more prepared to come out even stronger,” Bea said of the second round of league play.

Washougal has slowly moved up the state’s RPI rankings but as of Wednesday morning the team remains behind Mark Morris.

“Everyone ranked us below some of the teams we’ve beat,” Bea said. “It just makes us want to come out harder and prove them wrong.”

Two potential returners from last year’s state tournament team moved, and the Panthers did get a new coach this season, too. So far, though, the Panthers do not look like they have missed a step on this journey that they hope will lead them back to Yakima for the Class 2A state tournament. 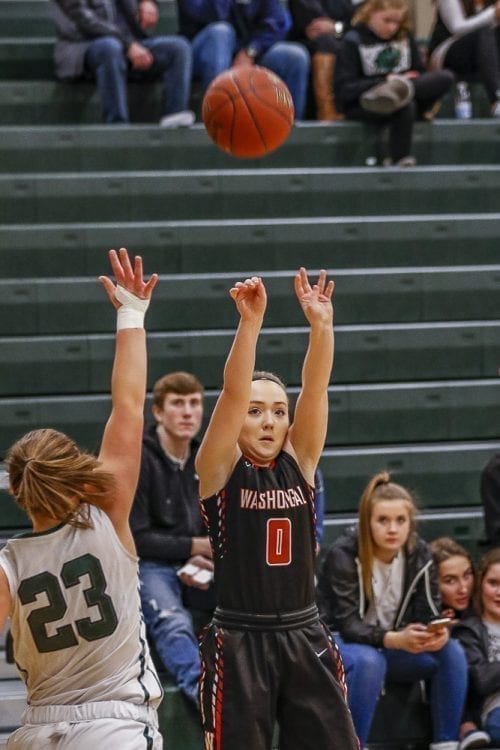 Knotts is learning about each player’s strengths and weaknesses. The players are learning their roles under a new coach.

The coach appreciates the depth on this squad. The roster gives her the ability to substitute freely without a drop-off in execution.

“If one player isn’t doing a job, someone else is ready to come in and do the job. I can pull a player out, talk to her, coach her, and get her right back out there,” Knotts said.

While many coaches see little or no value in looking at rankings, Knotts uses the RPI as a motivator. Sure, it’s just a computer spitting out numbers. But as of now, those numbers suggest Washougal is the 12th-best team in Class 2A girls basketball. Knotts wants her team focused on the next level, being prepared to face the teams in the top eight come playoff time.

As the squad prepares for the second round of league play, the players are trying to maintain the edge with intensity at practices.

The Panthers also are not afraid to tell it like it is when something needs to be said.

“We can take accountability without taking offense,” Bea said.

The coach noticed that special bond her players have with one another.

“They all know each other so well. They’re like sisters, so they’re beating up each other,” Knotts said. “I’m constantly pulling them from each other.”

That might sound odd, but the coach meant that as a positive. The Panthers are pushing each other in order to be better prepared when they face opponents.

“We get so wrapped up into it,” Bea explained. “We’re all friends still. It’s OK.”

Against Woodland, the Panthers scored the game’s first 13 points. The Beavers never got to within single digits the rest of the night. Bea just kept adding to her stat line. She had two blocked shots on one possession, plus all those boards.

“I never really keep track of my stats,” she said. “I’m just focused on doing what I can to help the team.”

Washougal will open the second half of league play at home Thursday against R.A. Long.