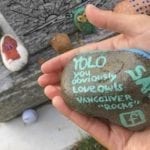 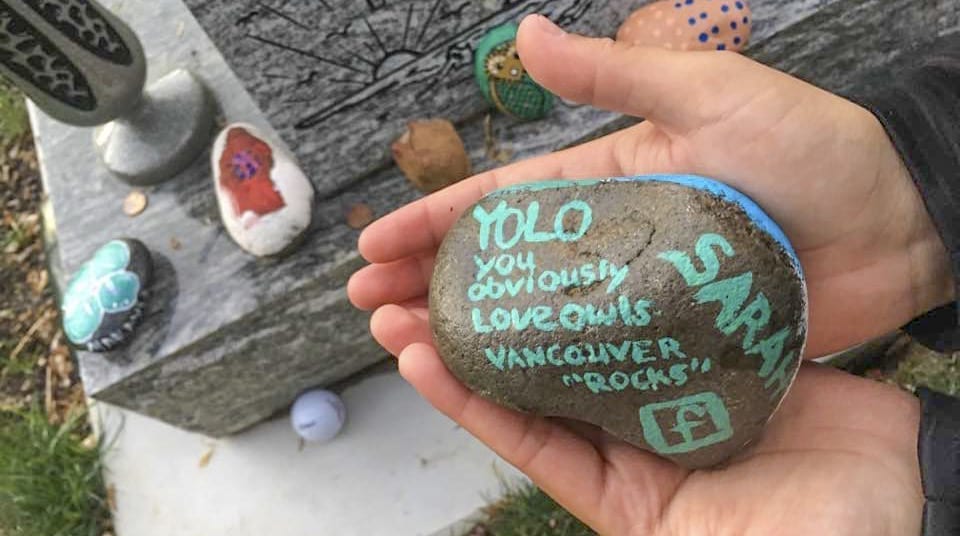 VANCOUVER — When 39-year-old Hockinson resident Angelique Vines Reagan first started the Vancouver “Rocks!” group back in June, she said she just hoped for a fun community activity that would bring people together and spread joy.

Since then, she said her goal for the group has already been exceeded.

“Wow, it’s been more successful than I could’ve hoped for,” Vines Reagan said. “We have had a few meetups at local parks and libraries, but this group is really grass roots. Any member can create an ‘event’ and host a get together at any time. I think there have been a lot of small get togethers and painting parties among group members and friends.”

Vines Reagan decided to create the Vancouver “Rocks!” group on June 21 of this year after she got invited into the Grays Harbor “Rocks!” group and thought it was a neat idea.

“A woman name Aisha Lesh in Port Angeles, Wash., started the first ‘Rocks!’ group about six months ago called Port Angeles ‘Rocks!,’” Vines Reagan said. “It spread around the Washington Peninsula from there and then exploded in Grays Harbor County about three months ago where GH ‘Rocks!’ grew quickly to over 11,000 members. I was born and raised in Grays Harbor (Aberdeen). I have a lot of friends and family there.”

“I happened to get invited into the GH ‘Rocks!’ group and thought it was such a fun idea,” she said. “I wished I could participate, but I live too far away. I decided to start a group here in Vancouver hoping it would catch on … and wow, it’s astonishing. I think we are the biggest group in the state now.”

So, how does the Vancouver “Rocks!” group work? It’s simple — find some rocks and some painting supplies and get creative. Group participants paint rocks to “hide” around Vancouver and all of Clark County to simply spread joy and brighten people’s day. Participants can search “rock painting” on Pinterest or Google Images to find lots of rock painting ideas. Artwork should be PG-rated as children love to look for and find the hidden rocks.

On the back of the painted rocks, participants are asked to reference the Facebook group Vancouver “Rocks!” and people can additionally hashtag their city (#Camas, #Battle Ground, etc.). Once group members are done painting their rocks, hide them somewhere for others to find. People are also encouraged to post pictures of their painted rocks before they hide them.

Although the Vancouver “Rocks!” group has only existed for a few months, Vines Reagan said the group has thousands of members already, with hundreds of new members seeming to join the group every day.

“There is a lot of joy and excitement here,” Vines Reagan said. “Surprisingly over rocks. There are constant new posts on the group page around the clock day and night. Lots of people participating all across Clark County in some way or another, whether they are painting and hiding rocks or searching and finding them, or happening upon them by chance and then looking us up. This is getting people out and bringing people and families together.”

Vancouver resident Trista Egli found out about the Vancouver “Rocks!” group a couple of months ago from a friend and said she became instantly hooked after that friend showed her some of the rocks she had painted.

“I started painting some of my own and once I had a nice handful we went out hunting for our first time,” Egli said. “There’s no rules to the game, but a lot of people will replace a rock that they’ve found with one they’ve painted or hide one close by. It’s so much fun to watch the kids find them. And even more fun to paint.”

Egli said news of the unique group has continued to spread and new groups are continually being created. She said one of the Vancouver “Rocks!” group members even brought a painted rock to Hawaii on vacation, and there is now a group there.

“This is spreading organically and not just in Portland (no advertising just word of mouth),” Vines Reagan said. “I would be that most areas of Western Washington have a ‘rocks’ group nearby now and so do many states across the country as this phenomenon is spreading like wildfire all of a sudden. People really, surprisingly, love this activity because it truly is fun for all ages and you feel like you’re doing something good when you participate. This is an activity that appeals to single individuals and large groups alike. Parents enjoy painting rocks just as much as their children do.”

“I feel like … How many times do we come across an activity in life that brings joy full circle,” Vines Reagan continued. “There is so much joy being felt during the creation of these painted rocks. There is joy being felt in hiding them anticipating someone else’s smile. Then there is the joy in finding them, realizing that someone lovingly spent time to paint this and then left it for you to find. I believe this is the reason it is spreading so far, so fast. With so much ugliness and sorrow in the world, we could all use a little more joy.”

Vines Reagan said a lot of the people she talks to about the group who are intrigued are often worried that they aren’t artistic enough to join the group. She said she wants people to know that there is no minimum artistic ability required for this group.

“If you can splatter some paint on a rock in a mixture of pretty colors, you should join in because the small child who might find your rock will love it,” she said.

Vines Reagan, who is a registered nurse at PeaceHealth’s Family Birth Center, lives in Hockinson with her husband and their two daughters, ages 3 and 5. The couple lost their 7-year-old son last year to a chronic illness.

“There are no boundaries on our group, we really include anyone who wants to participate all over Clark county and anywhere really,” Vines Reagan said. “There are new city groups popping up every day it seems all over Washington state and other states. This will be a national/international thing I’m betting. Our rocks have traveled out of the country, too, by some visitors.”