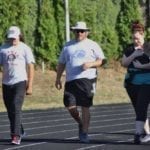 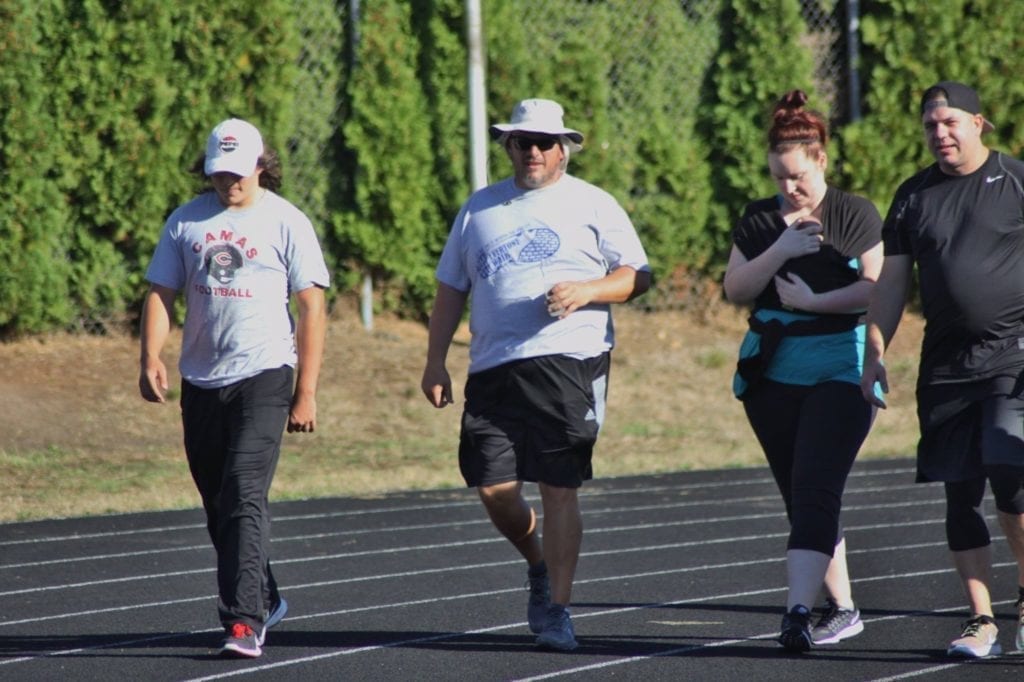 Camas man walks in attempt to fulfill his vision

Dale Rule got himself fit by walking, now he wants to help others do the same

CAMAS — Dale Rule’s initial story isn’t all that unusual in America. Big person decides to lose weight and walks it off.

That’s usually where the story ends, but not for Rule. More than six years after taking 41 minutes to walk a mile, the 44-year-old Camas High School special education paraprofessional continues to build on his journey, as he wants to help change lives in America, and ultimately, the world.

More on that in a moment, because first, Rule had to fix himself.

It started in late 2009, when Rule stepped on the scale and discovered that he had surpassed its limit of 350 pounds. Eventually, by putting one foot in front of the other, one mile at first and then miles every day, Rule peeled off nearly 150 pounds in the course of a year.

But it didn’t stop there. Earlier in September,  Rule completed his sixth 24-hour walk-a-thon at Camas’ Doc Harris Stadium, an event where more than 2,000 people joined him in walking throughout the day, evening and early morning hours. It’s become a fundraiser, with money donated toward obesity causes.

This summer, Rule walked more than 1,300 miles to complete a 40-day journey from Seaside, Ore., to San Diego.

Nuts? Sometimes Rule says his wife Lya believes so. But these type of challenges have become the fuel Rule needed to motivate himself to become healthy after more spending more than a decade as someone who was morbidly obese.

As a former football player, and now a freshman coach at Camas, Rule loves competition. In Feb. of 2010, Lya bought the couple a calorie-management device called Bodybugg, an armband device that monitor calories and exercise. The Rules started their walking journey on Feb. 10, 2010, first deciding to walk for two hours.

Rule decided five minutes was enough. Lya, by Rule’s description, “lit into me,” and he kept going, for one mile. It took 41 minutes.

But the Bodybugg device gave Rule a measuring stick. Like football, it became a competition. One mile led to walking in the morning and night, and soon he was up to seven miles, then 15 miles.

In six months, Rule had lost 101 pounds. By Dec. of 2010, Rule was down to 219 pounds. Which, of course, scared him a little, because now what? The competition carrot was losing weight. Maintaining a healthy weight wasn’t much of a contest.

So next, Rule came up with a challenge of taking at least 30,000 steps in a day for 30 consecutive days. Thirty days eventually became 74 consecutive days, a streak that  ended during a family trip. While on that trip in Denver, Rule was listening to a sports talk show where they were talking a 24-hour marathon fundraising event.

“I said to my wife, ‘You think I can walk 24 consecutive hours to bring awareness to obesity? She looks at me and says, ‘Dude, there’s something wrong with you,'” Rule said.

Months went by, and then Rule did it, walking for 24 consecutive hours on the track at Camas High School. Friends, football players, and locals came by during the 24 hours to walk and donate money. Which followed with another question: Are you going to do another one?

This year’s 24-hour walk at Doc Harris was Rule’s sixth. He walked close to 90 miles during the event; Rule’s high is 94 miles, which is nearly four miles an hour.

The Seaside-to-San Diego was another challenge. Though it almost got sidetracked a month prior, when Rule had to make a pit stop at the hospital, where it was discovered he had an 85 percent blockage in one of arteries to his heart. Rule had a stent inserted, and he was back walking within a few days.

Starting on June 23, Rule averaged 34 miles a day, walking along the coastline to San Diego. The first day, the weather was miserable. By the end of Day 3, Rule began to think he had made a mistake. Rule spent the night feeling awful, though he suspected it was something with his diet.

Ya think? Rule had already lost 12 pounds. After consulting with his wife and a personal trainer, they figured out he wasn’t eating enough and was losing too many electrolytes. A few days later, Rule was back on track, and by Day 10, he called Lya and said “I got this.”

A month later, Rule was in San Diego, where friends and media met him at SeaWorld at 8 p.m. on Aug. 1.  His 17-year-old son Jeffrey and a friend, Chandler Box, drove a van with a travel trailer during the trip, setting up camp each night for the Rules to sleep. The Rules spent the night at hotels or at the homes of family and friends about a third of the time.

What’s next? Rule is thinking big. He wants to purchase 40 acres, fence it and build a fitness park, with 10 miles of walking trail, and everything that athletically can be placed inside the fence, such as athletic fields, swimming pool and a weight room.

“My vision isn’t to do it in Camas. My vision is to go to Compton, or Detroit, or Oakland, and go to these place that are obliterated by obesity. We’ve got to rebuild these communities,” Rule said “It’s not my vision, really. I’m going to do it.”

To do it, not only does Rule need to raise an incredible amount of money, he needs to keep walking.
“I typically run around 235 (pounds), and that’s about 40 pounds heavy if I want to live to be 90. My goal is to  build parks in every state, then other countries, so I’ve got to be alive to see that it happens,” Rule said.ive to see that it happens,” Rule said.