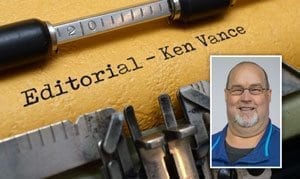 How does this sound to you? The state of Oregon wants to take money out of the pockets of Clark County drivers to help fix transportation problems — wait for it … in Oregon!

Earlier this week, Camas resident and ClarkCountyToday.com citizen contributor John Ley posted a story on our website about a transportation bill currently in the Oregon State Legislature. In his contribution, Ley pointed out the fact that Oregon lawmakers had the brilliant idea for tolling on both the I-5 and I-205 bridges.

Remember, Southwest Washington sends about 75,000 commuters each day to Oregon for employment purposes. So, the Oregon plan is to take the revenue generated from those tolls and help fix its myriad of transportation problems.

I can testify that Ley diligently does his research before he puts together a report on issues that impact Clark County residents. But, you may or may not know him from Adam. So, it’s just a citizen blowing his horn, some of you may have thought.

At different points during the RTC meeting, Oregon Department of Transportation (ODOT) Region One Manager Rian Windsheimer, an RTC board member, briefed his fellow board members on the discussions underway to address some of that state’s transportation congestion issues. It was the kind of testimony that would put you to sleep if you weren’t careful.

Near the end of the nearly two-hour meeting, Clark County Councilor Eileen Quiring had the foresight to take the opportunity to ask a followup question to Windsheimer about Oregon’s plans. Specifically, Quiring asked Windsheimer to elaborate on the “interesting funding mechanisms’’ Oregon was considering to try to make some of their transportation fixes work.

Windsheimer started out with some convoluted answer, but finally addressed the elephant in the room. He confirmed Oregon had plans to put tolls on both I-5 and I-205, which would take revenue from Clark County drivers to address transportation issues in that state.

“There is language in the bill right now as it relates to tolling, that talks about both the I-205 corridor and the I-5 corridor as they go from the (Columbia) River to the merges where I-5 and I-205 meet,’’ Windsheimer said.

Windsheimer said the Oregon lawmakers were receiving testimony earlier this week and a work session was scheduled for today (Thursday) to further work on the bill. It is not a done deal, but nevertheless, it should be of grave concern to Clark County residents who should be voicing their opinions to their respective elected officials, many of which sit on the RTC board.

It’s important to remember, as Ley has pointed out on many occasions, the biggest transportation problem on the I-5 corridor is the bottleneck at the Rose Quarter in Portland. The current transportation bill that Oregon lawmakers are working on, includes a proposed $338 million to address issues at the Rose Quarter, but Ley accurately points out that doesn’t include the construction of any additional lanes in either direction.

Virtually every transportation expert I have spoken to in the last six months has confirmed there will be no significant improvement to traffic congestion in the I-5 corridor until capacity is increased at the Rose Quarter. You can build a new I-5 bridge with 10 lanes in each direction and you won’t come and go from Oregon with any less frustration than you do now.