It’s back-to-school season in Washington state. Cue a teachers’ union threatening to strike, willing to take taxpayers hostage as they make compensation and other workplace demands, despite the fact that teacher strikes are illegal in Washington state.

It’s happening in Kent where school is supposed to start on Aug. 25. It might not. On Monday, members of the Kent Education Association (KEA) authorized a strike amid negotiations over a new contract with the Kent School District. Families, many of whom are taxpayers paying the wages for teachers to show up to their jobs, were given notice that the first day of school might be delayed. They should know today if students will be missing out.

Whether it’s just a threat or the strike happens, teachers will be hurt by this move. Many Washington families left our public schools during COVID-19 times. Enrollment has dropped by more than 41,000 students since 2019, according to the Office of Financial Management. Many more families and taxpayers are dissatisfied with public schools’ poor performance, visible in the learning loss children have experienced. Public schools and teachers don’t need another reason for Washingtonians to think the state’s public school system can’t and won’t work for the state’s children.

School districts give families a yearly calendar that parents and students arrange their work and personal lives around — and that they should be able to count on. Teachers’ unions, however, have frequently broken the law, ignoring this school calendar that communities and families build their lives and livelihoods around.

A 2006 opinion from the state Office of the Attorney General says, “In Washington, state and local public employees do not have a legally protected right to strike. No such right existed at common law, and none has been granted by statute.” It adds that “statutes presently do not impose penalties on public employees for engaging in a strike.”

The lack of penalties might be why even though public teacher strikes are illegal in Washington state, they still happen. Teachers who are union members but whose unions don’t represent them well should visit optouttoday.com to learn more about how to opt out of a union, allowing them to follow their consciences and saving them union dues.

About this Kent scuffle, Finne writes, “The move is about money, of course.” And she details the following data points:

“At a time when Kent Public Schools is losing students, union officials should be thinking about attracting families back to the schools, not calling controversial strikes to give families even more reason to seek learning alternatives,” Finne concludes.

Public employee strikes are against the law, cause harm to students and families, erode public trust and hurt the workers involved in them. This is the wrong way to do business.

Instead of hostage-taking, unions and teachers need to have discussions with their districts, the state and the public about educational priorities, so basic needs come first. Right now, wants and needs chosen for schools are debatable and can negatively impact workplace conditions.

While those conversations are happening, and students are receiving taxpayer-funded educations, the Legislature needs to establish penalties for employees who engage in unlawful strikes as soon as possible. Strikes that harm parents, children and the teachers they adore need to be expelled.

In this ruling the court said, “The strike interferes with the Plaintiff’s legal obligation to provide comprehensive educational services to the 26,000 students enrolled in the District,” and, “The strike obstructs and prevents students from obtaining the free and appropriate public education to which they are legally entitled under Washington law,” and “The strike has idled over 1,000 classified employees who are unable to work when school is not in session; and who will not be paid during the period of work stoppage.”

Elizabeth Hovde is a policy analyst and the director of the Centers for Health Care and Worker Rights at the Washington Policy Center. She is a Clark County resident.

Remeber what happened in 2018 when just about all districts in the state when on strike because of the extra funds coming from Olympia? Remember, these are the same people that fought tooth and nail to keep schools shut down. There also the same people that have openly blamed the parents/community for the failue called “distance learning”. Now, with those contracts expiring, the unions will be back pleading for our support and money “for the kids”

Public education has given the community a poor return on it’s investment in the schools. It’s long past time for more options to K-12 education in this state

You are misinformed about the purpose of the strike. The only pay increase on the table is the COLA that was authorized by the state. What is of bigger concern is the lack of supports that were provided last year to address the mental health needs, behavior needs, and academic needs of students in the context of post-pandemic disrupted education. Particularly at issue is the request for more counseling staff, adequately staffed special education programs, and behavioral supports that were not in place last year and are slated to continue this year. We had unsafe situations all year long due to overloaded classes and caseloads, and no relief. We have an extremely high level of immigrants, special education students, and families in poverty. You cannot put a special education teacher safely in a highly impacted and overloaded classroom without the contracted paraprofessionals to provide support – yet that is what happened regularly last year. You cannot effectively teach a class of 26 1st or 2nd graders to read when students reacting to trauma are escalating and causing an unsafe classroom. Most of our schools do not have adequate mental and behavioral support staff to help classroom teachers deal with these situations. We want to be with our students, and we want to have the supports to keep them safe and ourselves from burning out. The strike is more about staffing than about pay. This is a district that historically has been very top-heavy in central administration and stingy on extending staffing in the schools. Just this year, a new school superintendent was hired from within and given a 27% raise to the tune of over $350,000 (highest paid superintendent in the state). The district has $60 million in reserves and another $60 million available in ESSER funds yet we are told that there is no money available for our asks. Before making judgment about a situation, learn more about the issues at hand. 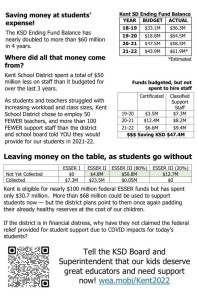