HAZEL DELL — When something breaks, there are usually two options for its owner. The item can be thrown out, or the owner can attempt to fix it. In Clark County, volunteers at quarterly Repair Café events give the owner a helping hand to fix the item.

Repair Cafés occur every quarter, Volunteer Coordinator Jessica Ausel said, and “it’s grown each time.” Thursday’s event was likely the most attended of all three so far, Ausel said.

According to Ausel, the idea for the Repair Café was started out of a partnership between Columbia Springs, Clark County Public Health, City of Vancouver among others. As broken items are repaired rather than thrown out, “it’s a great way to keep things out of the landfill,” Ausel said.

Mike Filbin, owner of Filbin’s Ace Hardware, said that there is a culture of simply throwing broken items in the trash. There is “value in doing what we can to help change that,” he said.

Thursday’s event was the first such event hosted at Filbin’s Ace Hardware. “The goal is to move this around the county,” Filbin said. By hosting Repair Cafés at different locations in Clark County, they will be more accessible to more people, Filbin said.

Volunteers at the event were present to help repair a variety of broken items. Several stations helped repair small electronics such as lamps and fans. Other volunteers were on hand to sharpen knives and tools. Several volunteers used their sewing skills to help repair garments. 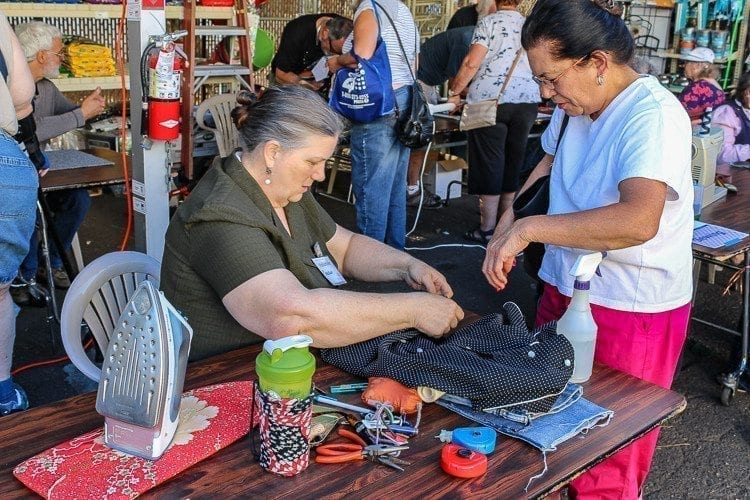 Volunteer Cathy Day said that Thursday’s Repair Café was her second, and she spent the evening sewing garments and even small stuffed animals. Day heard about the events as a volunteer at the Vancouver Community Library, where the first Repair Café was held.

Day said that she used to be a Girl Scout leader, and developed a philosophy of volunteering that “if everybody did something, no one would have to do everything.”

Volunteer Eric Meir had heard about the event from a coworker. “I like fixing stuff,” he said, and the event let him help others by repairing their items. Meir likes to volunteer, and had been “wanting to help the elderly more.” Meir spent the evening repairing various small items as needed.

Attendees of the event brought a variety of items for repairs. JoAnne VanNess brought an OttLite lamp in need of repair. “I am delighted,” VanNess said, after the lamp had been fixed.

LeAnn Gilmore and her son Reed brought a bicycle that needed its chain repaired. On a long bike ride, the chain would not stay on the gears, Gilmore said. “We did not know how to fix it.”

Gilmore said she considered taking the bike to a repair shop, but when she heard about the Repair Café, she thought it would be a better place to start. Her son was interested in learning to repair things, and the hands on nature of the event was another benefit, Gilmore said.

Claire Cano brought an “old radio of sentimental value” in hopes it could be fixed. “It’s a great idea because these days people don’t repair things,” Cano said.

Richard Keenan first began going to repair cafés in Portland, where he said the events were quite popular. He brought several items that needed repairs, including a hat, several knives in need of sharpening and a walker that needed its brakes adjusted.

“I’m delighted because I can get things fixed,” Keenan said.

The next Repair Café is scheduled for Wed., Nov. 8, from 6-8 p.m. at the Battle Ground Community Center.

For more information on how to volunteer or what items to bring, visit the Repair Café webpage at https://clarkgreenneighbors.org/repair-cafe#.