Addition of Sue Marshall to the council in District 5, sways the vote in favor of raising citizens’ property taxes

In a marathon end-of-the-year meeting Tuesday that included the business of the 2023 budget hearing, members of the Clark County Council voted to approve a County Property Tax Levy Option for the 2023 General Fund.

There were additional taxes approved by the councilors Tuesday including a tax for roads and a tax for parks.

Councilor-elect Sue Marshall, abruptly sworn in to the District 5 seat last week, joined outgoing Councilors Temple Lentz and Julie Olson in voting to raise the property taxes of county residents. County Chair Karen Dill Bowerman and Councilor Gary Medvigy voted against the increase. Each of the five councilors acknowledged that the 2023 budget, which was also approved by the same 3-2 vote, was balanced without the tax increase.

“It is an excellent budget that prioritizes many of the needs,’’ Marshall said. “It takes into account uncertainty that is still ahead and increased demand. I think it is a prudent approach.’’

Even though County Manager Kathleen Otto was able to present the councilors with a balanced budget that didn’t require any cuts in county services, Marshall and the outgoing councilors still supported the property tax increase. Marshall said when she was campaigning for the Nov. 8 general election, she routinely heard from area residents that they wanted more services.

“To a person, one of the things we talked about consistently was government services and the need to provide government services,’’ said Marshall, who also pointed out that “all of the small (Clark County) cities voted to take their 1 percent increase. Taking a vote to increase taxes is not an easy vote to take but they’ve taken those votes.

“This is one of my first votes,’’ Marshall added. “It’s not easy to take something when I know people are suffering out there. But, on the flip side, I think this budget provides a lot of services to those people who are suffering.’’

Olson added, “we have a healthy budget right now. We are not advocating for anything other than responsible governing. That is what this is all about. I resent the idea that if we vote for this that we don’t care.’’

Lentz echoed sentiments previously expressed by Olson that “this is one of the best deals around,’’ referring to the services county residents receive for the amount they are taxed.

“We’re in a reasonably solid position for the short term, but we are also looking at many long-term items that we know need to be addressed,’’ Lentz added.

A frustrated Medvigy said it was the best budget he has seen since joining the council and that after pouring over the 271-page document provided by County Manager Otto and her staff, “there is nothing that cries out for us to raise taxes right now. In fact, just the opposite is true. Clearly, by the budget that Kathleen (Otto) and her staff have put together, we don’t need to raise new taxes.’’

The councilors heard testimony from elected officials, county staff and citizens during the first budget hearing on Monday.

“I reflected on the testimony from the electeds and the testimony of those not elected, simply citizens,’’ Bowerman said. “It was striking to me that the electeds really wanted us to go for that 1 percent (increase) and not one of the people who were here testifying as citizens pushed that at all and in fact pushed the opposite.’’

Bowerman spoke of the “psychological stress” many citizens are experiencing as a result of rising inflation rates as well as higher gas and grocery prices.

“We have a budget that is stable and balanced without additional tax for years; what a blessing,’’ Bowerman said. “Let’s go forward without adding to citizens’ stress. Instead, when it is needed, let’s talk about how we are going to handle the situation.

“Inflation is up but wages often aren’t a match,’’ Bowerman said. “Those on a fixed income continue to slide down farther in purchasing power as prices increase. We are at a 40-year high with our inflation rate. It is phenomenal that that is the case, but it is.’’

When Marshall was sworn in to her District 5 seat last week by Auditor Greg Kimsey, she replaced Dick Rylander, who was appointed by Gov. Inslee earlier in the year. Bowerman, Marshall and Rylander were each under the impression that Marshall would not be sworn in to the District 5 position until Jan. 3, after the council voted on the 2023 budget. Rylander had publicly stated that he would not vote for the property tax increase, so the outcome of Tuesday’s vote would have been different had Marshall not accepted Kimsey’s offer to be sworn-in after the election was certified.

Rylander posted on social media that he waited through five hours of the Tuesday meeting to testify against the tax increase. Rylander said “by voting no there was no significant impact of the budget for 2-3 years.”

There are more increases than listed in the article. There is a park tax increase. There is a road tax increase. Together they add up. A full accounting should be out soon. Oh wait…a new $.46/gallon increase in gasoline taxes Jan 1st. All all of the taxes, which one at a time seem to be tiny, and they add up to real dollars.

Don’t forget the sales tax increase you voted to send to the ballot.

Or the increase medical examiners fees that people who lost a loved one have to pay now. Also, the $3.3M bonuses to County employees (but, hey, that just ARPA money, so no big deal) and the $187k HR contract (could’ve spent $79k but went with the most expensive) which will surely lead to them wanting more money. When I’m fighting that I’m going to name it the “Rylander Raise.”

Correct…sent to the people to decide not the councilors making the decision.

Maybe that’s why they voted for the tax, and not for you.

It all does add up is correct. You got 4,900 votes in D5 but refused to endorse Benton. He is down by 1,300 votes. Now, we are all having to pay more taxes (for no real services increase, no matter what Sue Marshall says) because some wouldn’t help the party candidate win.

If you really believe what you wrote the world is in trouble. My votes, except those I got that were anti-Benton went to Don. The votes that didn’t were Rick Torres…those (25%) sent to Marshall. But go ahead and believe whatever you choose.

That’s wishful thinking. The candidates endorsement or lack there of matters to their voters. You sat on your hands and didn’t endorse or campaign. Things add up in elections but I don’t think you understand that. But hey, you have a nice plaque. I’m not saying your lack of endorsement was THE deciding factor but it was a factor that you’ll have to live with and own, which I doubt you’ll do. 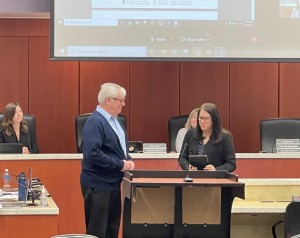 It’s pretty obvious that the electorate in the entire country is done with rude politicians with huge egos. Benton lost this election because people don’t like him, not because Rylander didn’t endorse him. Republicans in this county spend more time destroying their own candidates and don’t concentrate on winning hearts and minds. They turn rational conservatives away from them. If the R’s don’t stop being compete jerks to people, they will continue to lose.

As I said, there are many factors. Your point about Benton proves my point. So, if we don’t like him, we’re not going to vote for him? When you see a slim margin it comes down to these kinds of factors. Another factor is CCRP didn’t throw their whole support behind Benton. Rick Torres, who claimed to be a Republican, withheld his support. Benton made some other campaign mistakes by underestimating Sue… the list goes on but to say “people didn’t like him” the numbers don’t point that way (if he lost by 5,10, 15% you might conclude that). But party leaders, like Dick, should’ve acted what’s best for the party and endorsed and campaigned for the R candidate. He didn’t as many other party leaders did the same. All this adds up in close races.

If you aren’t willing to face the failures and make changes, you’re doomed to repeat.

Don spent 18 years being elected to the State Senate. I guess they “liked” him enough to keep sending him to represent them. I’ve heard so many times from citizens when I was Chair of the Party that Benton was the only politician that ever really helped them. He didn’t just talk, he got to the bottom of it and helped so many people. This may not have been Don’s time to come back into politics in the County. Policy over personality is how I vote.

I hope Don Benton can OVERRIDE Sue Marshall… The LEFTISTS Like KIMSEY and others should be FIRED, for wanting to increase property taxes… This Needs to be reserved.

Oh great! So the county had more money for spray paint around the sections of road needing work…fantastic return on our tax revenue!

Citizens should take note, the Democrats generally initiate and vote for tax hikes at every opportunity. Since Democrats took control of the state legislature, the number of tax hikes, and the taxes and fees levied on WA residents and businesses have increased dramatically. The $.46/gallon gas tax hike that will take effect Jan. 1st is just one of many increases voted in by the democrat majority. When Don Benton was a WA state senator, he reliably worked to defeat state tax and fee hikes. The democrat Sue Marshall is acting in accordance with the democrat fall back position, raise taxes as much and often as possible.

Correct. Is he perfect? Nope, nobody is but Benton is a fighter against the administrative state here in CC and stands up for the taxpayers.

Thus, the answer to the question, Why are all of the money making, middle class patriots moving out of Wa. State? Have fun with all of those taxes libs. Wake up!!!

I read this. Re read it. and Re read it again. Does anyone else not see the blatant wrong doing? Marshall was sworn in before January 3rd to clearly vote on increasing taxes. No one else sees the jaw drop in this? Well..our taxes are increased. Thanks?

People that actually matter, in Clark County, have already lost and need to come to terms. Clark County will never be a nice place to live. It is Portland’s Premier neighborhood and that will never change without a Civil War.

It appears that there is a lack of intelligence factor going on here with a “swamp” factor, driving the bus, equals screwed constituents. No one in their right mind would appoint, let alone increase pay on a manager as unqualified as the one they chose. We need leadership with a backbone, not yes men and bobble heads that approve every directive that is handed to them. We need a big firehose to clean out the whole darn mess, county and city meat heads.