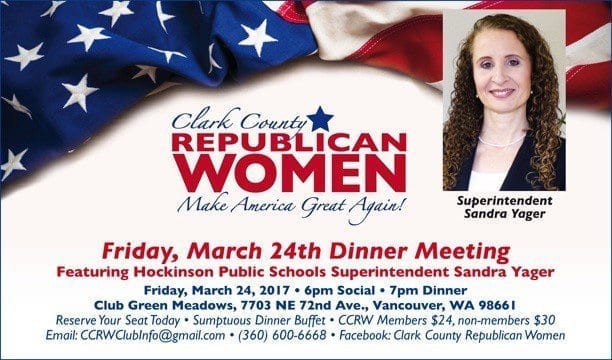 Yager leads one of the fastest growing public school districts in Clark County. Superintendent Yager, an Argentina native, has nearly 25 years experience in public education and administration. Students in the Hockinson Public School district consistently perform among the highest in test scores not just in Clark County but also across the state. Yager has a fascinating story about growing up in Argentina under the rule of dictators, and appreciates the freedoms she now enjoys as a U.S. citizen. She presents her perspectives of public education through the lens of a lifelong believer in giving all kids the opportunities to achieve their goals through work ethic, commitment, and dedication to their education.

The mission of CCRW is to encourage women in elected roles and supportive roles, promote an informed electorate, provide quality educational programs, promote Republican ideals and work for the election of GOP nominees. Club members strive for courage, commitment, compassion and civility in Clark County politics.