Nearly a third of confirmed cases have involved the demographic, which comprises 10 percent of the county’s population

CLARK COUNTY — Across the country, the story has been the same.

Minority populations have borne the brunt of the COVID-19 pandemic.

The reasons are still being researched, but in Clark County there are some strong hypotheses as to why Hispanic and Latino populations are seeing a disproportionate number of cases.

Demographically, people of Latino or Hispanic descent make up 10 percent of the county’s population, yet they have accounted for nearly a third of the 685 confirmed COVID-19 cases so far.

The pattern has held true across Washington state, where Hispanics make up 42 percent of cases, while comprising just 13 percent of the population.

While non-Hispanic whites make up 68 percent of the state’s population, they account for 37 percent of total cases.

At Wednesday’s Clark County Board of Public Health meeting, Dr. Alan Melnick, the county’s public health officer, offered one theory for the disparity.

“We’re seeing these cases in a population that’s working in the kinds of conditions that you find in food processing plants, and agricultural work,” he said.

That is, jobs that require people to be in close proximity for long periods of time, often in noisy environments where you need to yell to be heard, potentially expelling more of the virus.

In addition, many of those jobs are seasonal, and may not provide health insurance or sick leave.

“There’s pressure on people to work even if they’re not feeling well,” Melnick theorized. “So that contributes as well.”

Out of the 132 confirmed cases in employees and close contacts at Firestone Pacific Foods in Vancouver, the vast majority were Hispanic. 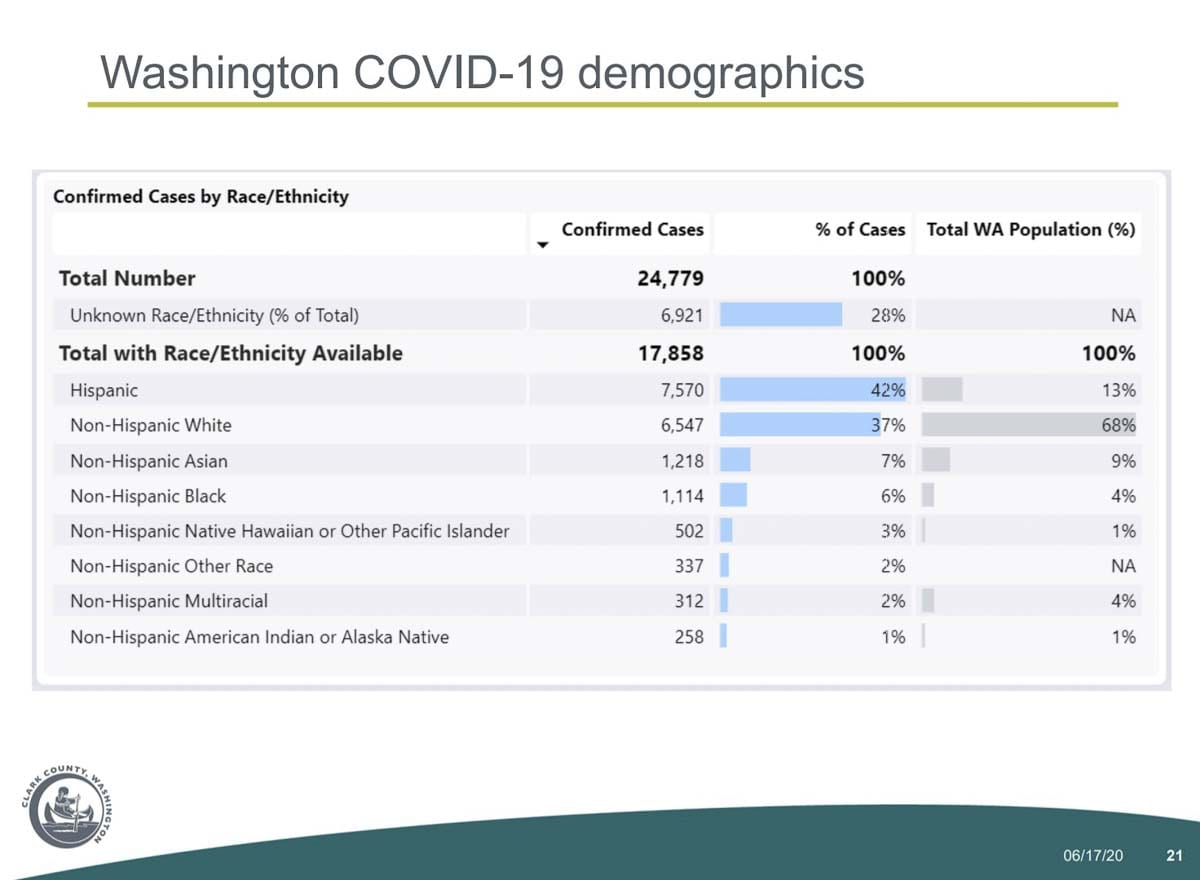 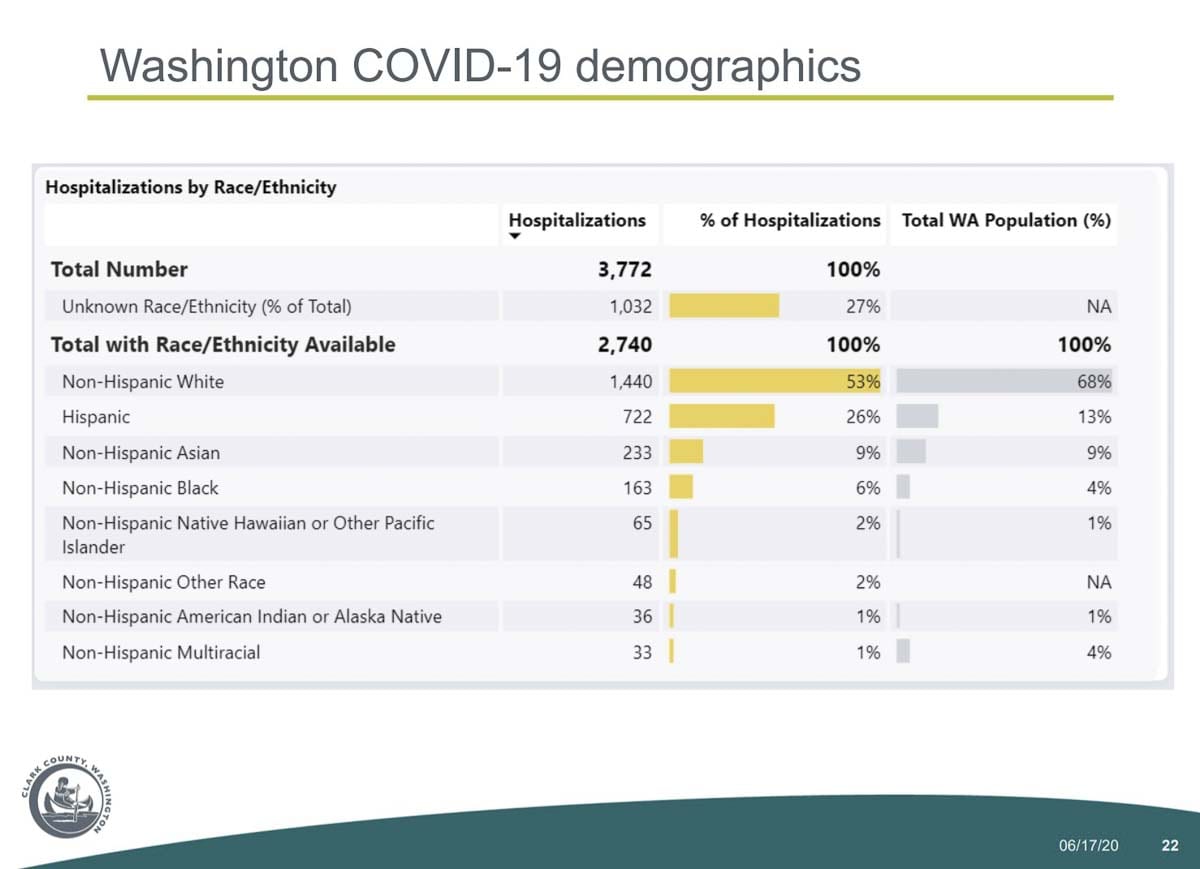 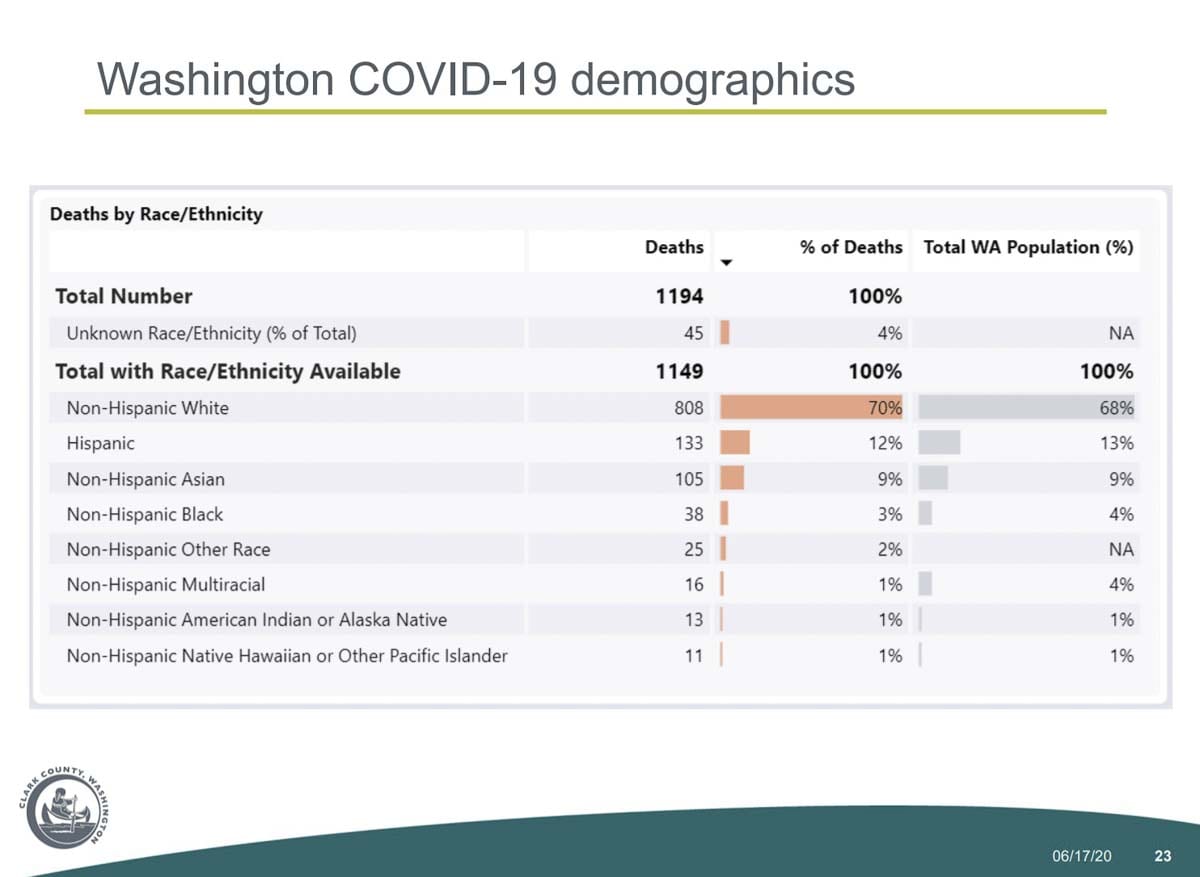 Many of them also live in larger family units, often with multi-generational family members.

Despite the prevalence of COVID-19 cases in the Hispanic community, the trend hasn’t carried over as much when looking at deaths due to the virus.

This largely has to do with the age range of Hispanics contracting the virus. Clark County has recorded almost no cases in Hispanic people over the age of 60, while they have accounted for more than half of the cases in people under age 50.

That, again, goes back to where the infections are occurring.

More than 60 percent of Clark County’s deaths, and across the state as a whole, have been connected to a long-term care facility, which has a population that is overwhelmingly white.

It’s worth noting that the data on racial demographics for COVID-19 cases is somewhat scarce. At present, a case investigator is not required to ask for race as part of their questionnaire, though the state is considering including the topic.

Based on a sample of 580 people nationwide, the Centers for Disease Control estimated that Hispanic Americans were nearly four times more likely to be hospitalized with COVID-19 than a non-Hispanic white person, when adjusted for age.

On a national level, the impact was even higher on Black Americans, and highest still for American Indians.

Research is still being conducted on why COVID-19 is impacting minority groups disproportionately. Whether it is economic status, access to healthcare, biology, or a combination of those factors remains to be seen.