The professional riders and the amateur riders. Their teams. Their families. Their friends.

When they arrive for the Washougal MX National, they bring plenty of spending cash to the region.

The Washougal MX National is one of 12 stops on the Lucas Oil Pro Motocross Championship series. Washougal has been the summer stop on the series for the Northwest every year (except for 1987) since 1980.

And every year, local businesses put out their signs to welcome race fans.

Thousands show up to make it a three- or four-day vacation, to ride in the amateur races in the days leading up to the professional motos on Saturday. They camp at the park or fill up nearby hotel rooms in Washougal, Camas and east Vancouver. 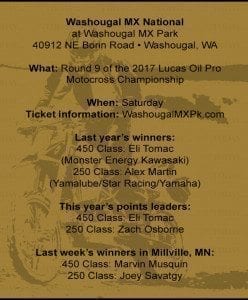 Because it is a national tour, and because it is the only stop in the Northwest, fans trek from Oregon, northern California, all parts of Washington, as well as Idaho and Montana, to name a few.

“We become the epicenter for the sport of motocross. Wherever we go, that’s going to bring thousands of people,” said Brandon Short, media manager for Lucas Oil Pro Motocross.

“The Pacific Northwest is a huge hub,” Short said. “When you’re an enthusiast, when you love this sport, you’ll make the pilgrimage.”

Sure, traffic can get a bit hectic as all those fans manage to make it to the track about eight miles north of town along Washougal River Road. But all that traffic also equals big business.

“I don’t know how many millions it brings in, but it brings in a lot of money,” said Brian Barnes, the spokesman for the Washougal MX Park.

Some businesses tell their employees that they cannot take days off during the MX National.

“It’s all hands on deck,” said Diana Shiluk, one of the owners of the Washougal River Mercantile, the closest store to the MX grounds, about two miles away from the track.

The store has a little bit of everything: Fresh meat for cookouts, gas, healthy food, junk food, a deli, a coffee shop and all kinds of beverages for motocross fans to enjoy in the warm weather.

The Merc, which is celebrating its 100th year in operation, has some sporting goods and some auto parts, too. Need propane for the campground? Got it.

The river is a magnet for people throughout the summer, with race weekend bringing in even more folks. Fuller said in a typical summer week, business is more than 60 percent local. On race weeks, it’s 60 percent non-local.

“It’s huge. It’s usually our biggest week of the year,” Fuller said. “Do we appreciate it? Yes.”

K&M Drive-In in Washougal has a temporary facility at the MX Park this year.

“This is our community. It makes perfect sense,” said Kevin Bruzzone of K&M. “We are the burger of Camas-Washougal, so it makes sense for us to be out here. And they asked us.”

K&M Drive-In has seen an increase in sales from motocross fans over the years at its location in town. Bruzzone believes it became a word-of-mouth success story, from fans across the Northwest, remembering the food they consumed when traveling to the National.

“This year, we’re in a staffing crunch,” he said, noting the drive-in operating in town, while the facility at the track has to be staffed throughout the busy weekend.

Brent Erickson, the executive director of the Camas-Washougal Chamber of Commerce, noted the week is special for hotels, gas stations, grocery outlets, auto parts stores, and restaurants. After all, the population Washougal more than doubles on race day.

“With all the people coming in from around the U.S. … it’s a big impact, economic wise,” Erickson said. “As far as the businesses, they know what’s going to happen, and they’re prepared for the influx of people.”

Professional rider Tommy Weeck, who is from Seattle and lived in California, now calls Washougal home. He has property, in fact, where Will Call is located for the Washougal MX Park. He runs a school for motocross riders, RiseMX Training, which brings in athletes from the region throughout the spring, summer, and fall months.

“It’s one of the biggest events in the area,” he said. “The amount of people who share their love for dirt bikes, it’s spectacular. So many people come here to be part of this.”

Fortunately for local businesses, those people want to eat, have to refuel, and they need a place to stay.

That means race fans are welcome every year.