The launch is mesmerizing.

It is beautiful. It is awe-inspiring.

And, according to those who make it happen, that adrenaline rush can last a lifetime.

“Rocketry is something you can put your mind to and you build it and then there is this very satisfying result that you get out of it,” said junior Steven Wu of Camas Rocketry, a new club at Camas High School. “Rocketry is the kind of thing that you do in high school, you do it when you’re young, but it’s something you can carry through to college if you want to pursue it as a career. And if not, you can do it as a hobby. It’s something you can enjoy and spread to other people hopefully throughout your whole life.”

That is one of the goals of the new club, to spread the love for science, math, and glorious launches.

The club is already leaving its mark, too.

Later this week, some members of the club will be taking off — in a plane, not a rocket — to head to Virginia for the national finals of the American Rocketry Challenge.

In all, there are 101 teams from 41 states that will be in the finals. To qualify, teams were required to build and launch a rocket that safely carried a payload of two raw eggs with a target flight duration of 41 to 44 seconds at an altitude of 835 feet.

The Camas crew hit their marks and safely brought the eggs — the payload — back to the ground.

The rocket used for the ARC is “small” compared to another project the club took on this year.

Wu and colleagues did a research project last year — before the group became an official club at the school — and finished 18th in a competition that qualified them for the NASA Student Launch Initiative. Beginning last summer with a 70-page proposal, the Camas students started building a rocket that could fly to a target height of 4,000 feet. The club launched that rocket last month in Goldendale, Wash.

The club just about hit the target height, reaching 3,946 feet. The club will file a post-flight report to see how they did against other clubs. The NASA event is more of a celebration than a competition, club members said, a chance to showcase the skills of each club and put a spotlight on rocketry.

The ARC is a competition with prize money on the line. The national champions will also qualify for the international event in London.

“Just the experience is a big part of it,” Wu said, noting that winning would be wonderful, but it’s not a win-at-all-costs attitude. “The experience of being at this rocketry event with so many people doing the same thing, knowing there is this community out there.”

Camas Rocketry is its own community and the hope is that the club will grow.

Ava Wagner, a junior at Camas, said outreach is a big part of the mission, as well.

She likes sharing videos of launches and explaining the science behind rocketry. The plan is for the club to make presentations to middle school and elementary school students.

“We want to get the community interested and let them know what we’re doing,” Wagner said. “As they get older, they can continue doing this club even after all of us graduate.”

Upon high school graduation, look for many in the club to continue with science.

The club gained official status with the school this past fall. Some members have been studying rocketry for years, while others just started. All, though, are very quick to learn.

Shore said it took about a month to design and build the club’s first rocket. The next one went quicker, and so, too, did the next one. The students make adjustments.

“You do a lot of testing with it. We did 30 launches. Sometimes you leave the launch field with a bunch of question marks over your head because it doesn’t do what you expected it to do,” Wu said. “Then when it finally does do what your design said it would do, that’s something. It clicks. It’s really nice when that happens.”

Shore said there is just something about that end result that makes being a part of this club so special. The students, with the help of teacher Adam Webber, the club’s advisor, design, build, and launch these machines into the sky.

“It’s really rewarding,” she said. “You can see it. It’s an actual thing that happens.”

As scientists, they also understand that failure is just a new opportunity. They have seen one of their rockets blast off only to come right back down to earth in a crash landing.

“If something goes wrong, you spend five seconds going, ‘Oh shoot.’ Then it’s back to work,” Wu said. “We have to fix it. Move on. Build another one.”

The rockets are not cheap. The club is raising funds to buy motors and to offset traveling costs. The club has regional launches in Oregon and eastern Washington. But no place in Clark County. Just yet.

“If you know anyone who has a big giant field who will let us use it, hit us up. We want it,” Wagner said with a laugh.

“And wants to build a launch pad,” Wu added.

Club members are appreciative of the help they have already received. Local businesses have donated money, as well as family members.

To donate, go to: https://wa-camas-lite.intouchreceipting.com/camasrocketryclub

For more information on the club, go to https://www.camasrocketry.com/

The American Rocketry Challenge is sponsored by the Aerospace Industries Association, the National Association of Rocketry, and more than 20 industry partners. The challenge’s goal is to encourage students to pursue study and careers in science, technology, engineering, and math.

Rocketry is my thing so I’m really glad to see this, I hope they do well.

Another Congratulations to The Camas Rocketry Club! The team was just awarded 1st place in the Target Altitude category, at the NASA Student Launch Awards Ceremony (2 June 2022) for their high-powered rocket coming closest to their preliminary design target altitude, at the national competition. They came within 54 feet of their 4000 foot target altitude. 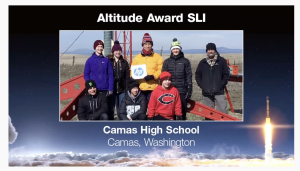