LA CENTER — When he was younger, he shortened his first name to Jack.

But when he moved to La Center, there were so many Jacks in his class that he decided return to his legal name, to make things easier.

Since then, Jackson Leslie has made quite a name for himself.

The La Center Wildcats go into the 2017 season as the team to beat in the Trico League. The Wildcats reached the Class 1A state semifinals a year ago, and that was with a team loaded with juniors.

Now seniors, Leslie said this could be the squad to make a name for La Center football. Not around Clark County — La Center is well known as a winning program here – but across the state.

If this squad could reach the final four in 2016, there has to be reason to believe it can get a state championship in 2017.

“It would mean so much. The school has had so many great teams. The one thing missing is a state title,” Leslie said. “We’ve been talking about is since our freshman year. We are going to be so ready. It would mean a lot to Coach Lambert, too.”

Yes, it would for La Center coach John Lambert. But he would prefer the spotlight remain on the players.

Lambert has close to 25 seniors out for football this season, by far the most in his 18-year run as coach. That’s a whole bunch for a Class 1A program. It is not just the experience, though. It’s the talent on this squad that has the Wildcats thinking big.

Jack Hiller is the best lineman the school has produced, Lambert said.

Colton Dolezal has the opportunity to be the best linebacker in Lambert’s tenure, the coach said.

Evan Honore is a running back/defensive back combo who can deliver punishment on both sides of the ball.

Leslie, meanwhile, is one of the leaders. Lambert said it is like having a college freshman on the team because he has been there so long. Leslie is a four-year starter, almost like a coach on the field.

“I can say one or two words to him, and he knows exactly what I’m talking about,” Lambert said.

Leslie is a wide receiver, a long snapper and his specialty is on defense, although he does not have “a” specialty on defense. He plays linebacker, safety, even cornerback.

“I’ll do whatever is best for the team. I’ve never been a big numbers guy,” he said. “I’ll just do whatever works, any position, to sacrifice for the win.”

Not every game in those four years has been “fun.”

These seniors played against one of the state’s top programs as freshmen and sophomores, long before they were ready to compete.

“We had to play Tumwater when we had no business playing Tumwater. It was demoralizing,” Lambert recalled. “We were La Center. They were the Seattle Seahawks.”

Interestingly enough, there was some good that came away from those back-to-back 40-plus point losses.

“I’m sure the parents didn’t like it, but I thought it was a good thing to play a powerhouse,” Leslie said. “They were so precise. They knew what they were doing. We’ve modeled their togetherness. They play as a team.”

Leslie and the Wildcats took that lesson and applied it toward the 2016 season. The result was a game after Thanksgiving, in the semifinals at McKenzie Stadium.

“It was an amazing experience,” Leslie said.

A few hours later, though, the season had ended.

“It felt, at the end of that game, we had some unfinished business,” Leslie said.

Which brings the Wildcats to 2017.

White Salmon appears to be the toughest competition for La Center, but most coaches expect the Wildcats to be on top of the league by the end of the regular season. That could pose a problem for the Wildcats, though. They have to keep their edge.

Leslie said it should not be too difficult to keep the focus. One, the Wildcats want to do what no La Center team has ever done before — win a state championship — and they also know everyone is out to get them.

“You have to know there is a target on your back. Every team is going to give us their best,” Leslie said. “You have to give every team the same amount of time on film, in practice.”

Experience does matter, and this La Center squad has plenty. 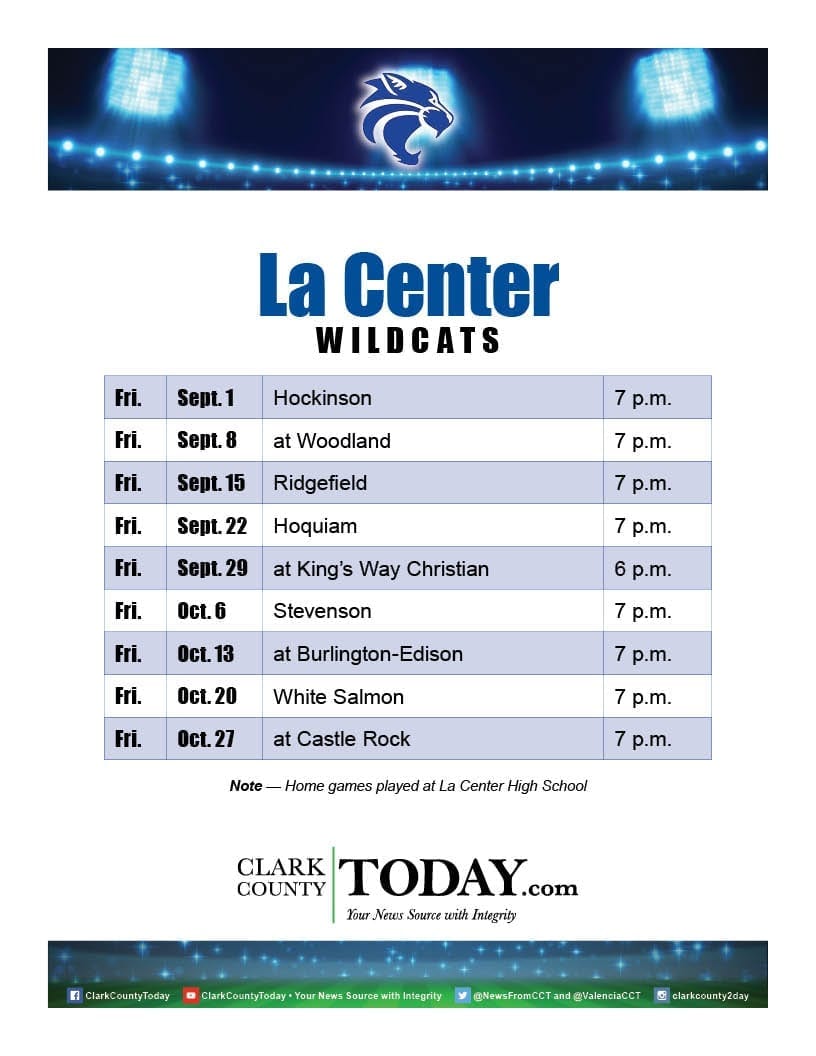