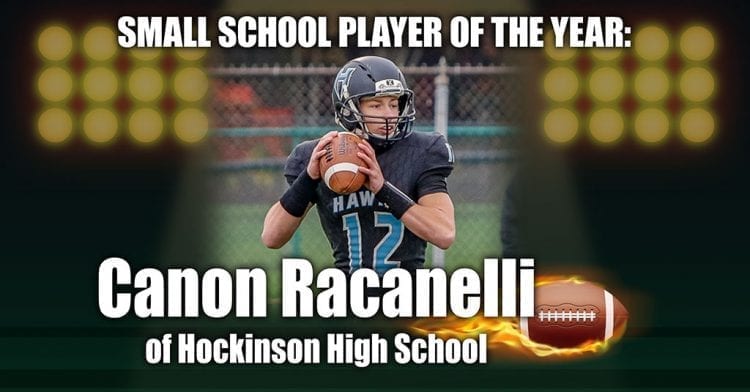 Hockinson quarterback has 50 touchdown passes this season, and the Hawks are hoping for two more games

HOCKINSON — Canon Racanelli went to the movies the other night and an employee there asked him if he played football for Hockinson.

She told him she hopes the Hawks win it all.

It is that kind of season for Racanelli and the Hawks. Strangers coming up to them to wish them well. There is a buzz around town.

Hockinson has a chance at a Class 2A state championship.

“My girlfriend asked me, ‘How do you know these people?’ I don’t half time time,” Racanelli said. “People are coming up to you. It’s pretty cool. Not just me. It’s everybody else, too.”

The Hawks are rock stars, playing in front of big crowds from a small school, improving to 12-0 this season with a date in the state semifinals Saturday in Spokane against West Valley.

One of the big reasons for this championship run has been the play of Racanelli, who has accounted for 65 touchdowns this season.

With the Hawks scoring 45 points per game and with that perfect 12-0 record, it is a pretty clear that Racanelli is ClarkCountyToday.com’s small school Player of the Year.

Everyone knew the touchdown passes would be there this season. A new wrinkle to his game is his running ability. He now has close to 3,500 yards passing but also leads the team with more than 500 yards rushing.

“I told him if he wanted to run the ball, he’s have to put on 15 pounds over the offseason,” Steele said. “He put on 20 pounds. He is the kind of kid who will do whatever it takes to be successful.”

The coach also said he has the intangibles, too.

“When he walks into that huddle, he makes everyone in that huddle better. It’s rare when you have one player who does that,” Steele said.

All the touchdown passes and all the winning — Racanelli has been the quarterback for three league championship seasons — also has led to a lot of confidence. Racanelli has been known to talk a lot on the field, in practice, or just about anywhere.

His coach does not mind.

“You want your quarterback to be that way,” Steele said. “He’s confident. As a football coach, I want that. He has never seen a pass he didn’t like.”

Racanelli said his style is what makes him thrive.

“If you don’t have confidence in yourself and the rest of the team, what else are you supposed to do? You’re there for a reason, and that’s to win,” he said.

This season has been special for so many reasons. The Hawks are in the semifinals for the first time in program history. They already can say they are the best football team ever assembled at Hockinson. And there is quite a family connection.

Nearly half of Canon’s touchdown passes have gone to his younger brother, Sawyer, a  sophomore.

Together they are also honoring their grandfather, who passed away last spring. The Racanelli brothers dedicated their season to him, and now they are having the best season in school history.

It is far from over, though. Getting to the semifinals was a huge step for the program. But Canon said nobody from Hockinson is satisfied yet.

“The big thing about this year is everyone’s goal is the exact thing,” Racanelli said. “We’ve said from the beginning we were going to play 14 games. We are not done until we slide a ring on our fingers. I truly believe that’s going to happen, but we have to keep rolling.

“This is the year to do it. This year, we’ve got the right group of dudes.”

With a confident, record-setting quarterback leading the way.