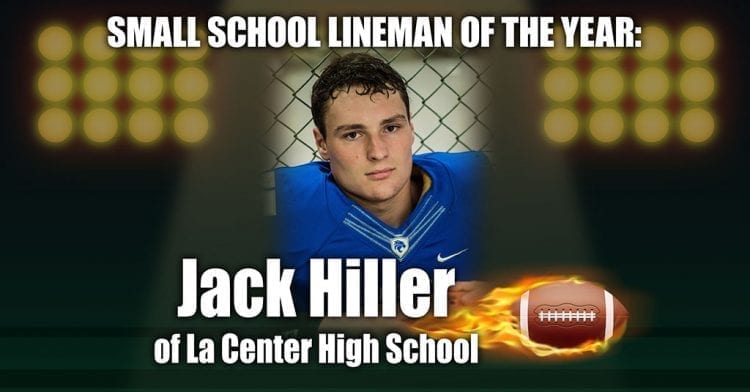 Very rare when a lineman is named the league’s MVP, but that is how good Jack Hiller is at La Center

LA CENTER — This just does not happen. But it did this year.

Not only that, but it really was not even much of a debate.

Jack Hiller of La Center was that good, that dominating, that much of a force, that the coaches of the Trico League voted a lineman as the league’s MVP.

“I was surprised,” Hiller said. “Linemen don’t get numbers like running backs and quarterbacks and stuff. I was really appreciative. The coaches in the league saw me play and noticed my work.”

For his performance in 2017, which is still going as La Center prepares for its semifinal game this weekend, Hiller is ClarkCountyToday’s small school Lineman of the Year.

“Linemen are not super represented,” Hiller said. “I think it’s really cool to show everyday people how important linemen are to a football team.”

Now in his 19th season as La Center’s coach, John Lambert said Hiller is the best linemen he has had in the program. And it is quite the impressive program.

A generation of winning at La Center

Posted by Paul Valencia
|Friday, November 17, 2017
|in : Sports
La Center High School’s football team has some interesting philosophies that has guided the program to an incredible run of success.
Read more

This weekend, the Wildcats will return to the Class 1A state semifinals. La Center is traveling to Bellingham to take on Meridian.

They got there with a game for the ages in the quarterfinals last week. La Center topped Cascade Christian 41-35 in three overtimes.

“It was a fight to the death, and death is not playing next week,” Hiller said.

“Just a crazy, hard-hitting game. So many chances for both teams. When it was finally over, such a crazy experience. Nothing like any game I’ve played in before.”

“We fought arm in arm the whole game,” Hiller said.

Hiller is 6-foot-5, 250 pounds, but as coach John Lambert described, it’s just about all muscle.

“He looks like a man compared to everyone else (on the field),” Lambert said.

“Part of that is his work ethic. He’s always in the weight room, always getting stronger, always pushing himself. The work ethic is what separates him.”

Hiller said he is not just doing all that to make himself better. He wants to set an example. Just like the older players did for him when he was younger. This culture of winning at La Center has to be passed down to the next wave of players.

“We show the underclassmen how to work and use our time wisely,” Hiller said.

Of course, Hiller is setting the bar at an unprecedented height at La Center.

Lambert, La Center’s head coach since 1999, has never known a lineman to be named the Trico League MVP in his time with the Wildcats. Hiller, though, made it an easy choice. He is the best offensive lineman of a team that racks up yards and points, and the best defensive lineman of a squad that has now won 10 games in a row.

“It wasn’t even a hesitation,” Lambert said of the nomination and voting process.

Now, Hiller and the Wildcats are hoping to make it 11 wins in a row. La Center has never reached the state championship game. If the Wildcats make it 12 in a row, they will be the champs.

“I’ve played with these guys for so long. We know each other inside and out,” Hiller said. “We’re all in this together.”