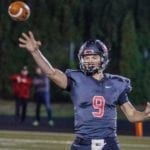 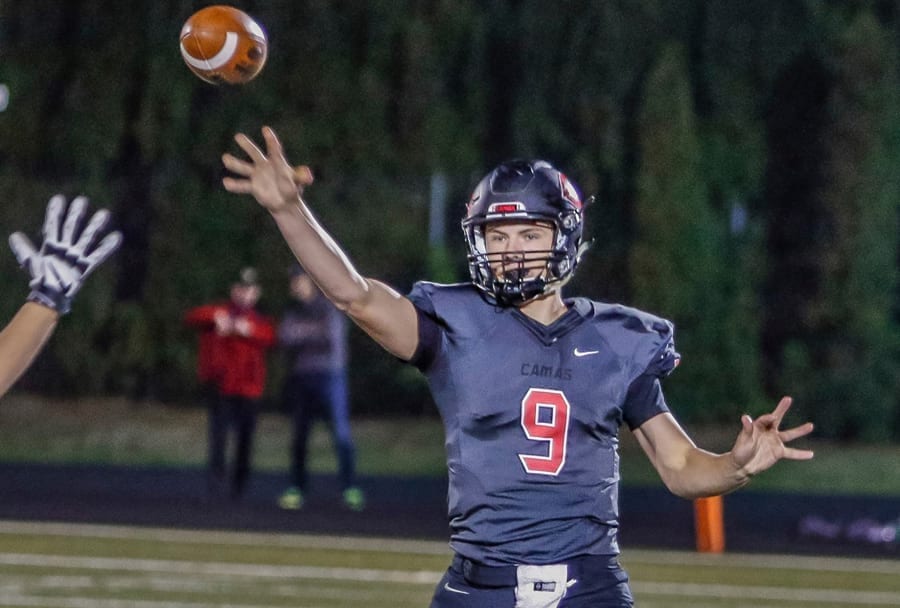 CAMAS — Camas football has built itself to a point where the participation numbers and competition for playing time is incredible.

View photos from the game here.

Jack Colletto knows the drill.  He patiently toiled until his senior year to finally get a chance to start at quarterback for the Papermakers. The wait looks to be worth it, after Colletto shredded another defense Friday night when he threw seven touchdown passes in the No. 2 Papermakers’ 49-28 win over No. 10 Battle Ground.

Colletto threw six first-half touchdown passes to lead Camas to a 42-14 halftime lead, then threw another three plays into the third quarter to complete his seven-TD masterpiece. Colletto completed 19 of 26 passes for 409 yards. The passing yardage and touchdown passes were season highs for Colletto, who led Camas to its 46th consecutive regular-season win.

A year ago, Colletto’s on-field contribution was that as a safety on defense. Meanwhile, Colletto prepared for his shot to someday playing quarterback by playing the position on the scout team in practice, and as he says “anything I can to make the other players better.”

Colletto’s turn came this fall, and so far, he’s been nothing short of brilliant. He’s led Camas to a 5-0 record, five wins that have been mostly one-sided.

“I was told that no matter what, my opportunity would come, and when my opportunity comes, I’ll shine. I just had to wait my turn,” said Colletto, who has completed 81 of 114 passes for 1,192 yards and 14 touchdowns this season.

Colletto is a dual threat quarterback, and he’s shown off his legs by running for more than 100 yards twice in games, and five touchdowns this season. But Friday night, it was about Colletto’s arm.

The Camas senior threw three touchdown passes to Drake Owen, and two each to Michael Matthews and Cooper McNatt. All of the scores came on Camas’ first seven offensive possessions.

“I had such confidence in them that it got to a point where I just put it up for them, and they’d find a way to make a play,” Colletto said.

Battle Ground (4-1, 0-1 GSHL) was looking to make its entry into the Greater St. Helens League’s elite, after winning four non-league games by double-digit margins. The Tigers played the game without their head coach Larry Peck, who was hospitalized Friday with a back ailment. Larry’s son Mike, the Tigers’ offensive coordinator, filled in as the Tigers’ head coach.

Battle Ground started fast, scoring less than two minutes into the game on a 49-yard run by Curtis Stradley. All that did was give Camas a target. The Papermakers tied the score at 7-7 two minutes later on Colletto-to-McNatt touchdown of 9 yards. Before the first quarter ended, the Papermakers had a 21-7 lead, after Colletto hooked up with Owens on touchdown passes of 16 and 38 yards.

Owens caught his third touchdown pass, a 23-yarder, early in the second quarter to give Camas a 28-7 lead. By halftime, the lead had swelled to 42-14 after Colletto threw scoring passes to Matthews and McNatt.

Battle Ground had its chances during the second quarter, twice driving inside the Papermaker 15. But a fourth-down stop by Camas’ defense, and a fumbled snap snuffed out opportunities to make the game competitive heading into the second half.

“We shot ourselves in the foot. Honestly, I didn’t do my job,” Battle Ground quarterback Gunner Talkington said.

That’s a little harsh, because in truth, Talkington was a workhorse. The Tigers senior completed 30 of 43 passes for 291 yards and two touchdowns, and ran 21 times for 112 yards.

The stakes elevate for Camas next Friday as it plays host to Skyview, a 42-0 winner over Columbia River on Friday. The Storm are the last team to beat Camas during a regular-season game, 31-10 in 2011.