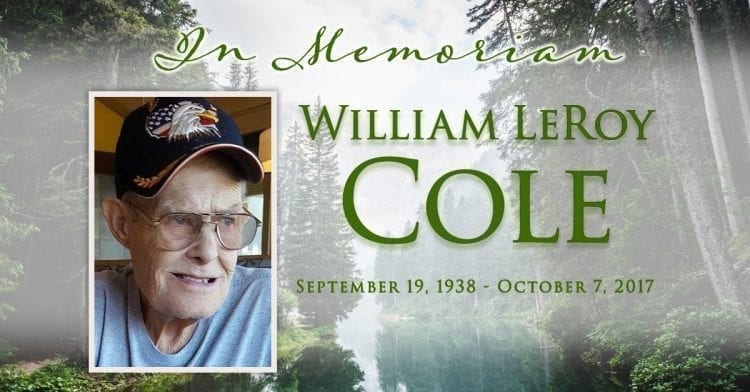 William LeRoy Cole died on October 7, 2017 in Vancouver, Washington, at the age of 79. William was born on September 19, 1938 in Caldwell, Idaho to Floyd and Ernestine Cole.

In Memory of William LeRoy Cole William loved fishing, hunting, football, gardening and his family, played football in high school and was very proud of his 95 yard return.

William was preceded in death by the love of his life of 56 years, Laura Cole, in Aug 2015, his brother, Reynold S. Bovent and his parent’s Floyd Cole(s) and Ernestine (Simmons) Bovent

William had been attending his granddaughter, Melissa’s wedding at Lewis River Golf Course when he collapsed, his granddaughter and her bridesmaid Samantha performed CPR until paramedics could arrive and take over. He was surrounded by the love of his family at the wedding before passing. His grandson Joseph Jr. and daughter Pamela were with him at the hospital when he passed. William died at Peace Health SW Hospital in Vancouver, Washington.

Arrangements under the direction of Bateman Carroll Funeral Home, Gresham, OR.