VANCOUVER — With the Portland metropolitan area being recognized as one of the most horrible traffic nightmares in the nation, we all know we need to reduce traffic congestion and improve our freight mobility for truckers.

What’s the story on traffic congestion in our region? Check out this statement from the 2016 INRIX Traffic Scorecard:

“Far and away, the worst stretch in the Portland area is the 9.6 miles of Interstate 5 from the Macadam Avenue/Oregon 43 Exit 299 to the North Tomahawk Island Exit 308.  When traffic is light, the trip takes 11 minutes. During rush hours, that goes up to 19 minutes and your average speed drops to 30 mph.

“The worst period on that stretch of I-5 is Friday at 4 p.m. You will crawl along at 15 mph for half-an-hour.  Are you a regular commuter through that stretch? If so, you’re wasting 33 hours of your life each year due to congestion, according to the INRIX study.”

Then there’s the 2017 update. Portland “earns” the 12th worst traffic congestion in the nation. Portland ranks 12 out of 240 cities nationwide, where people spend an average of 47 hours a year in peak traffic times, what the research firm colloquially calls a ‘’traffic jam.’’ Seattle is worse, ranked 10th in the country and 23rd worldwide.

And what is Oregon doing about all the problems on their side of the river? From a July 2016 Portland Tribune news report:

Washington County Commissioner Roy Rogers, who leads a metro-area transportation commission advising the Oregon Department of Transportation, said not all projects will involve highways, but all of them will cost money.

“We are firmly entrenched in our belief that this is a multimodal system,” Rogers said in testimony to a new joint legislative committee on transportation. “I have always quipped that a ‘project of regional significance’ is a way of saying that I cannot pay for it.”

And what about the area with the highest accident rate of any section of road in Oregon?

However, development of plans for the Rose Quarter interchange and I-205 widening will require millions more for design, engineering and construction. The price tag for development is $2.5 million for each project. Those and other projects are on a list that Portland-area officials hope will get state funding during the 2017 legislative session.

Where are they spending money?

One project would add a southbound auxiliary lane on Interstate 5 from Highway 217 in Tigard about four miles to Interstate 205 in Tualatin. The other would start development of a plan for the Rose Quarter in Portland at the congested interchange of I-5 and I-84.

An auxiliary lane allows cars and trucks entering the roadway to merge outside the main through-lanes.

What is a common sense solution?

Provide more alternatives for cars and trucks to get around the region.

What happened to I-5 traffic crossing the Columbia River, when the I-205 opened up in 1982, with the completion of the Glenn Jackson Bridge? A nice 18.6 percent drop in “Average Weekday Crossings” — congestion and vehicles using I-5 improved for everybody.

From our own Regional Transportation Council:

And they had already planned for a new transportation corridor on the west side, to be completed after I-205 was opened. Sadly, they abandoned that “plan.” Here’s the graphic for the “other half” of the planned “ring” around the Portland Metro region: 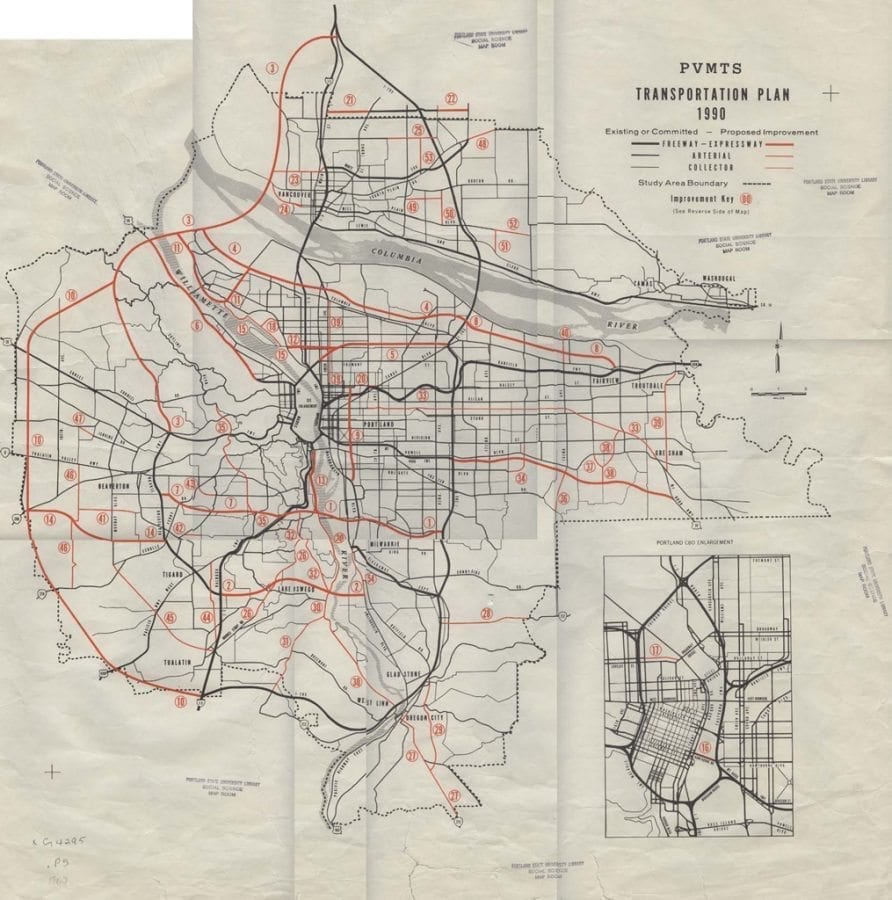 With regional population now having doubled since 1980, isn’t it time to create at least one, if not two new transportation corridors? Isn’t it time to “finish” the original plan that started with the construction of I-205?

Clark County, in 1979, was looking at and preparing for, a new transportation corridor on the West side of I-5. Here is the map, courtesy of Chuck Green. 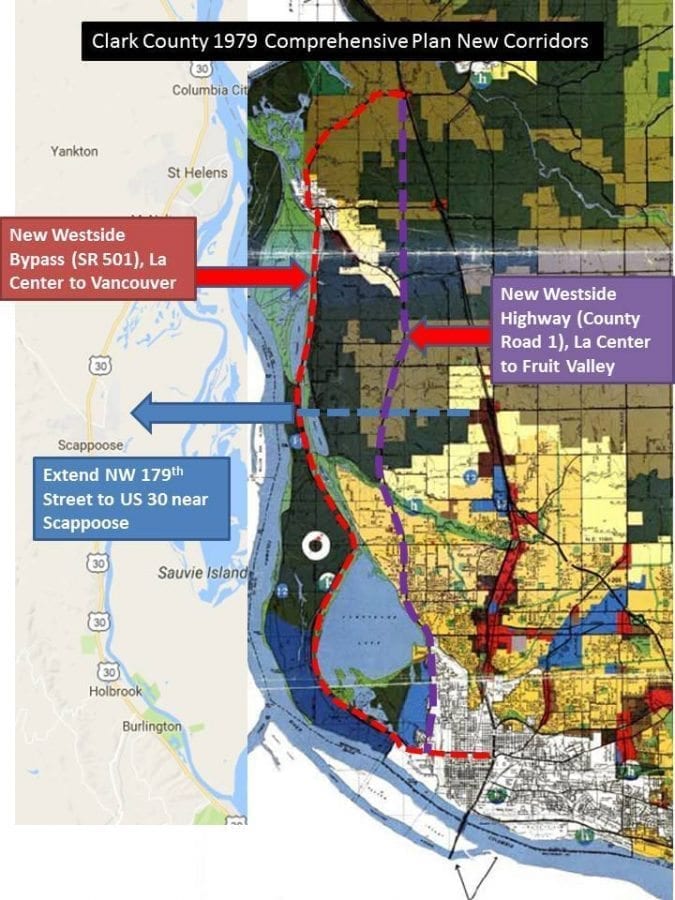 The 2008 RTC “Visioning Study” provided four bridge “options” to create two new transportation corridors. One of those westside “options” from 2008, sure looks a lot like the 1979 map above.

The RTC proposed a new corridor west of I-5, and a second corridor east of I-205. It’s common sense. 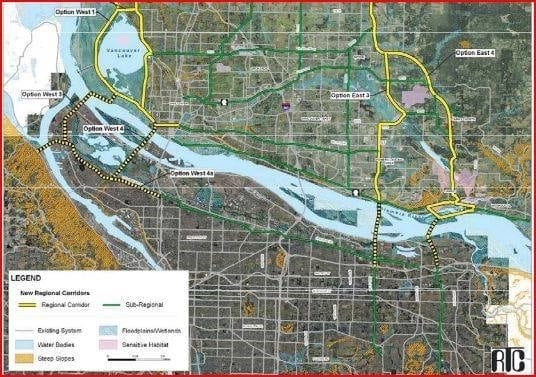 How long ago did they “know” they needed more transportation corridors?

They knew they needed a new transportation corridor along with a 3rd bridge across the Columbia River, back in 1980. From this 1980 Washington State Legislature study: 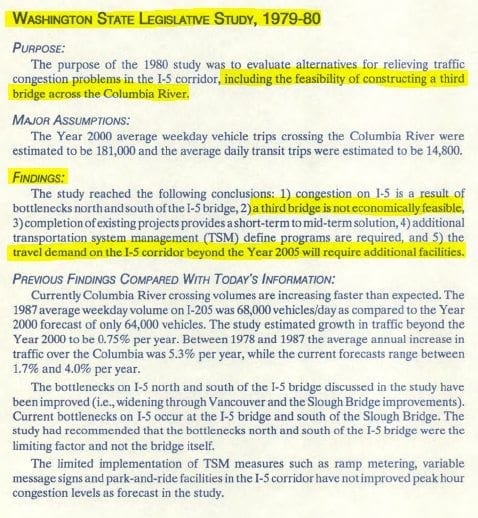 Another part of that same 1980 study said:

“The technical analysis concluded that the region would not have to revisit the question of additional river crossings until 1990.”

But it’s now 2017 and we still don’t have “additional river crossings,” 27 years after they said we would need to “revisit” the issue of new bridges and new transportation corridors.

This 1977–79 Washington state legislature study found that the I-5 bridge would be overloaded by 30 percent if there were not another new bridge (at another location) added to handle the traffic. They suggest six possible locations including one connecting east Clark County to east Multnomah County, and two more options west of I-5. 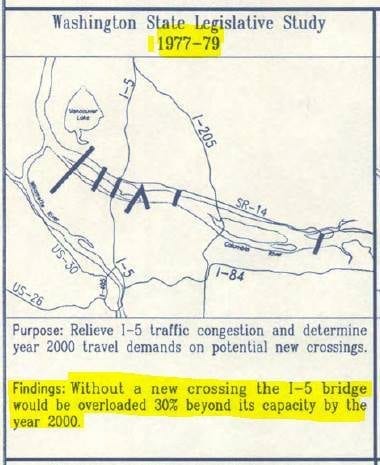 Here’s part of another study, from 1988, concluding we needed both westside and eastside corridors. 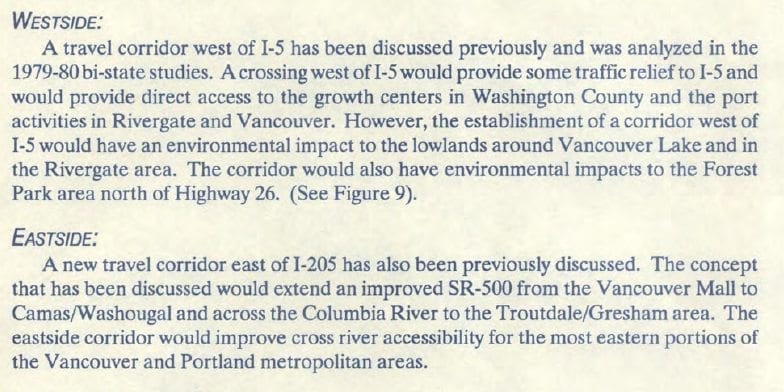 “Current traffic data show that the Year 2000 forecast on I-205 has already been exceeded.”

Furthermore, “The higher percentage (60 percent) of traffic returning to Clark County can be expected to lead to more severe traffic congestion problems than anticipated in the Bi-State Year 2000 forecast.”

Fast forward to 2017. One bill that is getting lots of attention is to “focus” on the I-5 Bridge. The CRC special interests are delighted, and are all supporting this bill.

Rep. Ed Orcutt weighed in & nails it in this ClarkCountyToday.com report.

“I’ve read through it (HB 2095) and I have read through SB 5806,’’ said Orcutt, the ranking Republican on the House Transportation Committee and a representative since 2002. “I don’t see anything in there that talks about a third bridge (over the Columbia River). Quite frankly, we’re going to do a huge disservice to the citizens of Clark County if our only bite at the apple is replacing the I-5 bridge and not expanding access across the river.’’

Orcutt finds it to almost unbelievable that in Cowlitz County, where he resides as a resident of Kalama, there are currently five crossings across the Cowlitz River with a total of eight lanes in each direction. By comparison, Clark County has just two crossings (seven lanes total) over the Columbia River despite the fact that Portland and Vancouver combined have a population (2.4 million, 2010 census) more than 20 times greater than Cowlitz County (102,410, 2010 census).

“You have 20 times the population and 12 percent fewer lanes,’’ Orcutt pointed out. “The math just doesn’t work.’’

Yet over in Oregon, one new member of the Oregon House has introduced a bill to start the process for creating a new transportation corridor on the west side. Bravo to Rep. Rich Vial for picking up the baton and trying to inject some common sense into Oregon transportation spending.

Here are the two “possible” routes for the latest version of a west side bypass, connecting I-5 with Oregon’s Hwy 26 in the Hillsboro area, and then continuing south of the Tigard area to reconnect to I-5.

Let’s get something done. I think the options have been planned and studied to death. We need more ways to cross the Columbia River. We need new transportation corridors for cars and trucks and freight to move around the region.

After all, Portland has a dozen bridges to cross the Willamette River. Why should we be limited to just two ways to cross the Columbia River? 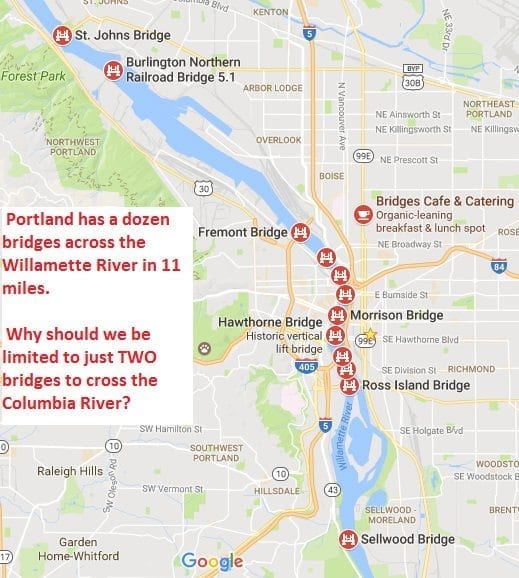