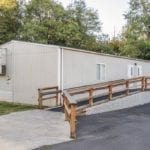 LA CENTER — La Center’s new superintendent, Dave Holmes, understands what an overcrowded school looks like: When Holmes came to La Center as a math teacher back in the 1990s, the La Center High School had just opened and it was already busting at the seams.

“The school had just opened and it wasn’t big enough,” Holmes says, shaking his head at the memory.

Building a too-small school may seem like poor planning, but Holmes says most of the blame lies with the state of Washington’s funding formula for new school buildings. “You can only build for current enrollment not (projected) enrollment.”

That’s a problem for districts that are growing as rapidly as La Center.

Over the past 12 years, the small school district in northern Clark County has grown by 50 percent. Last year, Holmes says, for the first time in nearly two decades, the district ended the year with more students than they started with.

“That usually doesn’t happen,” Holmes says. “Usually you have students graduating early … or students moving (out of the district) at the beginning of the school year. Typically, you would see a 20- to 30-student decrease over the year.”

According to most forecasts, which include the 2017 opening of the Cowlitz Indian Tribe’s new casino complex near La Center’s Interstate 5 boundary, the La Center School District is facing an influx of new students.

“Growth is expected to increase with the completion of the casino,” Holmes says, explaining that the district expects many employees at the new casino will seek housing close to their workplace and that the city of La Center has two multi-family housing developments in the works that could add several hundred students into the 1,600-student district. “We could face great issues with overcrowding.”

The problem of overcrowding is that something Holmes, a former La Center High School principal and assistant superintendent, has focused on since replacing retired La Center School District Superintendent Mark Mansell over the summer.

“We started the year with 11 portables, including two at the high school and nine at the (K-8 campus),” Holmes says. “That’s 18 classrooms, 450 students (at the K-8 campus), and we haven’t expanded our common areas, so they have to share the library, the cafeteria, the playground, the gym.”

The district’s K-8 complex is so tight on common-area space, Holmes says, that lunches are now spread out between 10:30 a.m. and 1:30 p.m. and students are using the “upper gym,” which was originally designed for extra bleacher space, not as a physical education area for entire classrooms of children.

The district is crowded — and getting more crowded every year — Holmes says, but that hasn’t stopped La Center from providing quality educational services.

“In my experience, La Center always overcomes and adapts,” Holmes says. “The district is thrifty, not cheap, and continues to make do with what we have.”

That said, many administrators believe now is the time to ask the public to help La Center’s school district grow.

“It’s no longer an issue of ‘Do you like portables or not?’” Holmes says of the district’s rapid increase in student enrollment and lack of space. “There really is no place to put more portables.”

Instead of pushing more portables, the district is looking to expand — either by adding on to its existing buildings or by building a brand-new school.

Last week, Holmes stood in front of a hand-selected group of school volunteers, employees and other community members who had proven to be heavily invested in the future of La Center’s schools, and told them that the district was considering a bond measure that could fund the building of a new elementary or middle school.

“It’s not an option to build another high school,” Holmes told the community members. “Right now, we have available to us, about $30 million that the state would allow us to pass a bond for. High schools are anywhere from $50 million to $80 million, so we don’t even have the capacity to pay for it (a new high school) right now.”

That leaves the district with the option of building a new elementary or middle school. Holmes says each has its pros and cons. With a new middle school, there would be more playing fields, a larger gymnasium and the types of common spaces that could be easily used by community groups during non-school hours and in the summer months. An elementary school, however, could be configured to accommodate just a few grades, such as a K-3 or a K-2 school, and could come with a smaller price tag than a costlier middle school since the district currently owns a parcel of land that may suit an elementary school.

“Everyone on the (school) board is very tuned in to taxes and to the strain that (passing a bond with new taxes) puts on families,” Holmes told the community members. “This will certainly be a very thoughtful consideration for the board members on what they’re willing to ask the citizens for.”

One positive thing, Holmes notes, is that La Center is in a good position to receive a higher-than-normal share of state matching funds for a new building. While most school districts in Washington state qualify for fewer than 50 percent state-matching funds on their building bonds, La Center would get nearly 68 percent of the costs paid by state matching funds. The state, however, only pays for $213 per square foot and Holmes says building costs in this area are higher than that.

With the higher-than-average state matching funds, Holmes says the district could expect to have 50 percent to 60 percent of a new school building’s total cost paid for by the state: “That means we could build a $16 million building with a $10 million bond.”

Putting a bond proposal together for the February 2017 election is next-to-impossible, Holmes says, but the April 2017 election could be feasible.

“That’s our first goal, the April election,” Holmes says. “After that, it’s August and, historically, August is a bad time to go out for a bond because it’s summer and people aren’t thinking about school yet. That would leave next year’s November general election, which might be better for us because we wouldn’t have to meet the 40-percent threshold.”

To pass a bond, the district would have to get at least 40 percent of voters who turned out for the last general election. Since the next general election, in November of 2016, is a presidential election, turnout could be high, making it more difficult for La Center to meet that 40-percent requirement.

“We’re waiting to see what the turnout is like in the general election,” Holmes said.

For more information about the La Center School District bond, to see Holmes’ presentation from Sept. 19, or to fill out the community survey about the possible bond, click here.