WOODLAND — Woodland residents showed an outpouring of support for law enforcement officers at the second annual Kings for Cops fundraising barbecue held at America’s Family Diner on Thursday. Money raised from the event will help bring officers from across the nation on a three-day salmon fishing trip on the Columbia River.

Nate Chumley, owner of America’s Family Diner, said that for the past seven years, the diner has helped sponsor Operation Salmon, which is an event where military veterans are taken on fishing trips on local rivers. After the ambushes of police officers in Dallas, TX, and Baton Rouge, LA, last year, Chumley said that a similar effort was started for law enforcement officers called Kings for Cops.

The first event was held last summer, and was “one of the biggest events at Horseshoe Lake Park,” Chumley said. At last year’s event, eight officers from Dallas and eight officers from Baton Rouge attended the barbecue at the park, as well as 150 local officers. Chumley said the event drew large crowds of people wanting to show their support for law enforcement.

This year, Kings for Cops will again host officers from Dallas and Baton Rouge, as well as several from cities in Washington. Chumley said that the officers were not present at the fundraising barbecue this year, but local residents still turned out to support law enforcement.

The efforts of Operation Salmon and Kings for Cops were combined this year, so law enforcement officers and first responders will be joined by veterans on the three-day fishing trips.

Chumley also hosted a live auction, where guests bid on a hand-painted skateboard, gift cards to local businesses and fishing rods donated by local Woodland rod makers. Guests could also partake in a raffle. All proceeds from the event went to sponsor Kings for Cops and Operation Salmon.

A unique prize was provided by retired Ridgefield police officer Steve Allen. Allen spent 25 years in law enforcement, and during that time amassed a collection of hundreds of police department patches from across the country and around the world.

Allen said he started collecting the patches in 1968 when his father, who was a law enforcement officer in California, gave Allen one of his patches. The collection provided “an interesting way to meet other officers from other departments,” Allen said. The highest bidder in a special auction was able to choose a board of patches of their choosing from Allen’s collection.

For Allen, hearing about the event was “divine intervention,” as he only met Chumley and learned of the event several weeks prior.

“It helps reinforce the fact that the majority of the public are good,” Allen said.

Local resident Nate Forbis worked for five years in law enforcement. Because of his background, “I had to support it,” he said.

In addition to the raffle and auctions, Fire Pigs Designs of Woodland sold commemorative T-shirts at the barbecue. The proceeds from the sales were donated to Northwest Battle Buddies, an organization that pairs veterans living with PTSD with trained service dogs.

Chumley said that he plans to help support Operation Salmon and Kings for Cops again next year, but the specific date of the fundraising event has yet to be determined. However, Chumley said that donations for auction and raffle prizes are being accepted. Donations can be dropped off at the Columbia Bank in Woodland or at America’s Family Diner in Woodland. 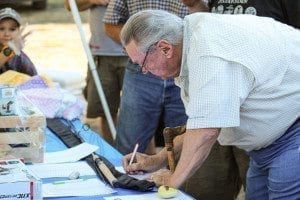 Guests checked the bid sheets constantly during the silent auction to make sure they were the highest bidder. Photo by Alex Peru 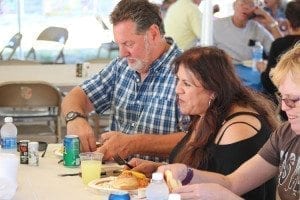 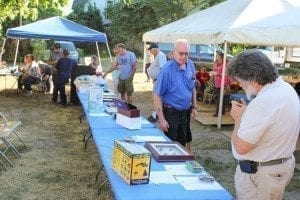 Guests at Thursday’s Kings for Cops barbecue were free to browse items up for bidding during the fundraiser’s silent auction, and place bids on unique items. Photo by Alex Peru 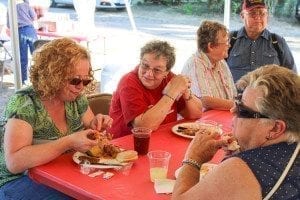 Alex Peru is a 2017 graduate of Washington State University Vancouver. He has a bachelor’s degree in History and a double minor in Political Science and Business Administration. Peru grew up in Battle Ground, and graduated from CAM Academy in 2013. He worked for The VanCougar, WSU Vancouver’s campus newspaper, for three years, including one year as the editor-in-chief. When not working, Peru enjoys reading books about history, working on cars and enjoying the outdoors in Clark County’s beautiful rivers, lakes and forests.