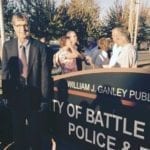 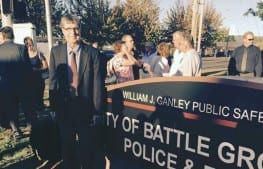 BATTLE GROUND — When Bill Ganley’s wife Brenda Alling talks about his fight with cancer, a battle that he’s been fighting for eight years, the main thing that stands out to her is his unwavering spirit.

“Bill has the most fighting spirit of anyone I have ever known,” Alling said. “I have seen him through some pretty dark days, and he has never wavered in his belief that he will get better.”

In 2009, Ganley was diagnosed with carcinoid cancer, a relatively rare form of cancer that consists of numerous slow-growing tumors throughout the body. After teaching and coaching in the Battle Ground School District for 34 years, Ganley retired just prior to the end of the 2014-2015 school year as the pain he was experiencing due to his tumors was becoming almost unbearable.

Although he wasn’t teaching anymore and was learning how to cope with increasing pain and fatigue, Ganley has always remained passionate about his position on the Battle Ground City Council. He regularly continued to attend meetings and work on city business up until this past June when he made the decision to go on an extended leave from his position. Battle Ground resident Cherish DesRochers is currently serving as pro tem to Position No. 6 (Ganley’s position).

Also since June, Ganley has been living at an Advanced Care Center memory care facility in Vancouver. He said he’s really missed attending council meetings and dealing with city issues over the past few months.

“I’ve been missing council, I get to talk to most of them (other council members) quite a bit,” Ganley said. “The mayor (Philip Johnson) visits me every week. I’ve had a lot of people visiting me, people from the community and past students.”

Aside from missing the interaction with his fellow council members, Ganley said he also misses the problem solving that comes with dealing with city issues and policies.

“Problem solving has been kind of my hobby, taking issues and designing policy to help the citizens of Battle Ground,” Ganley said. “One of the most recent big ones we did was the contract with the fire department, that has been a great thing for the city.”

Ganley said that he plans to visit his doctor soon in order to find out what his health status is, and find out if he can possibly go home.

“I feel good, but you can’t cure it (carcinoid cancer), you can only treat it,” he said. “I’d like to go home, but they want to watch me and make sure I’m doing OK. My strength has improved, if I can, I’d like to go to the beach. Not to do a bunch of walking on the beach, but just to look at the ocean. It (my cancer) is just one of those things that sucks. It’s tough.”

After one of his more recent brain surgeries, Ganley said he recovered much more slowly than he would’ve liked. He said surgeons removed a good portion of a tumor that was affecting his eyesight, but not all of it. He said still has several tumors on his brain, but said his sight currently is “not too bad.”

Ganley talked happily about how his wife Brenda visits him every day, and said he very much misses his cats and dog at home.

“I just have to continue to live life,” he said. “I want to find out what my status is when I visit my doctor. It’s been hard, but my recovery has been going better.”

In September of last year, Battle Ground council members passed a resolution deeming the police and fire stations in the city as the William J. Ganley Public Safety Complex, recognizing Ganley for his extraordinary leadership in service to the Battle Ground community.

The new signage for the Public Safety Complex was unveiled prior to a September council meeting last year. The event was a complete surprise to Ganley, who was under the impression that he and the other six council members were going to participate in a tour of the Public Safety Complex. When Ganley originally approached the new signage that day, he held back tears as he read the sign and noticed more than 100 community members who stood by to honor him.

Ganley was also presented with a special plaque during the council meeting that followed the unveiling event.

Ganley was appointed to the city of Battle Ground Planning Commission. He was elected to the Battle Ground City Council Position No. 6 in November 1993 and has been re-elected to five consecutive four-year terms. He served as Battle Ground’s first mayor under the council-manager form of government from 1997-2001, and played a huge role in shaping the new form of government elected by the vote of the people.
In addition to his service to the city, Ganley taught and coached more than 8,500 students at Battle Ground High School and Summit View High School.